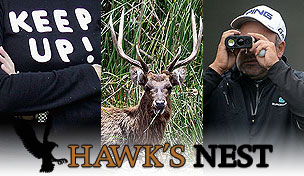 Jeepers, now I know why a couple of my golf buddies vanish every October at the start of deer hunting season. Stupid me. I thought they drove to upstate New York so they could sit in a tree and drink beer all day. Which, come to think of it, might be harder than making a 6-footer with a $20 nassau on the line.

Pardon my lack of compassion, but the next time I see one of Bambi’s descendants laid out alongside the Merritt Parkway, I’m gonna pull over, yank off those antlers and stick them right in my golf game. If that doesn’t produce enough IGF-1 to help me shoot lower scores, I’ve already begun compiling a list of other things that grow really fast:

My wife’s intolerance when I forget to put down the toilet seat.

You say none of those things could possibly contain even a trace of IGF-1? You’re probably right. Then again, I didn’t think a guy with a trace of cheating in his past could possibly vandalize his own legacy after 34 PGA Tour victories and three major titles, either.

ONE ADVANTAGE TO submitting this column every Monday is that I usually have a few days to ponder the game’s more sensitive news-related issues. Vijay Singh’s admission to using deer-antler spray, which violates PGA Tour policy, certainly qualifies from a journalistic standpoint, mainly because several relevant questions are likely to remain unanswered.

Pragmatically? This case is about as open-and-shut as it gets. “He put the PGA Tour brand in jeopardy, and that’s when I get militant,” said veteran pro Joe Ogilvie, a former member of the policy board and players advisory committee. “Not only did he break a rule, he broke a rule that has ramifications for all of us.”

It makes absolutely no difference whether Singh knew he was taking a banned substance. In golf, no two-stroke penalty is reduced to one shot if the infraction was deemed accidental. Given the Tour’s beyond-reproach public image, to which Ogilvie alluded, you would think Camp Ponte Vedra would issue a punitive measure in response to Singh’s confession.

Singh turns 50 on Feb. 22, and the timing of that birthday in itself should lead to an official suspension. You can’t let the guy jump onto the Champions Tour anytime soon and win his first two or three starts – the backlash would be loud and exceedingly negative. That said, I don’t think we’ll see any such sanction come down from headquarters.

Commissioner Tim Finchem has been given broad latitude when dealing with this type of situation. He can choose to do nothing, at which point the Tour’s unwillingness to publicize its verdicts only muddles the matter further. Like it or not, that’s how this particular organization handles its business.

Perhaps it’s in the best interests of everyone – and to the surprise of no one – that Singh withdrew from last week’s Phoenix Open with a back injury. GolfChannel.com editorial director Jay Coffin correctly predicted Singh’s WD on Twitter shortly before it happened.

But if suspicious minds can take us anywhere we let them, what Singh does or doesn’t do as a golfer from here onward isn’t as significant as what he already has accomplished.

The Tour’s drug-enforcement policy went into effect July 1, 2008. Less than three months later, Singh claimed the second annual FedEx Cup overall title with three victories in a five-week span at the end of the summer. Did he win those events with a little help from the antlers? Would he have been voted into the World Golf Hall of Fame if his usage of a banned substance had been discovered prior to his induction?

What we don’t know can’t hurt us, or so it has been said, but it sure can leave a mark on this fine game.

AH, SLOW PLAY. The bane of golf’s existence, the dirty little story that never goes away. I can’t remember it ever being worse than it was at Torrey Pines, especially while completing the final round Monday afternoon, when it took almost four hours to play 11 holes.

Eventually, they did finish. The reality? We’re just getting started. Slow play is likely to command center stage again over the next two weeks: at the notoriously paced AT&T Pebble Beach National Pro-Am, then at Riviera CC, where the afternoon draw hasn’t finished before dark on several occasions in recent years.

In my recent communication with Tour pros, two players have said that tournament officials won’t penalize the offenders, regardless of how bad things get. The current policy stipulates that a player is put on the clock only after a group is determined to be out of position. At that point, the first timed violation results in a warning, the second in a one-stroke sanction.

The last time that happened? Glen Day in 1995. Any player put on the clock 10 times over the course of a season is fined $20,000, but again, without any diligent enforcement, it’s all window dressing. All wasted breath.

“Over the last 15 years, the culture out here has changed,” said Ogilvie, one of the Tour’s more expedient players. “The thinking now is, I’ve got a couple of slow groups ahead of me – I’m gonna slow down so I don’t have to wait as much.”

While acknowledging the guilt-by-association factor to a certain extent – a Thursday group with two speedy golfers can easily fall behind if the third player is a tortoise – both the problem and its various solutions require an immediate and wholesale attitude adjustment.

As one veteran told me a couple of weeks ago, “a slow caddie can kill pace as much as anybody.” Perhaps, but we can all do the math. If two players each require an undue 45 seconds to finish every hole, a four-hour round creeps up to 4 ½. My three-step plan, which includes suggestions from the Tour pros themselves, represents an aggressive approach to a scourge that hasn’t been solved by passive measures.

• Legalize the lasers. It makes no sense to continue prohibiting yardage devices at a time when golf’s televisual product is compromised by an unacceptable pace. Why not allow any resource that shortens the cumbersome process of determining any player’s distance to the hole? In this context, I don’t care how loudly my caddie friends disagree. The time has come.

• Identify the culprits. Around this time last year, I proposed that the Tour begin posting a player’s average time per round – or better yet, the cumulative amount of time every player needs to complete a hole – along with the other primary statistics (fairways hit, greens in regulation, etc.). Nobody likes a slowpoke, but then, even most hardcore fans don’t know who they are. Let’s just say Ben Crane has company. And it ain’t fast company, either.

• Subtract FedEx points. Let’s face it: fines don’t work. Some of the snails would probably be happy to fork over $20,000 at the end of the year if moving slowly means an extra $250,000 in earnings. You’re supposed to remain calm out there, and though some guys would find a brisk pace detrimental to their overall performance, there is plenty of middle ground for everyone to live comfortably.

If a tie for fifth earns you about 100 FedEx points in a regular event, the Tour would need to adopt a system where at least 25 points are subtracted after the initial warning. A second infraction that same week not only would cost you a stroke, but a minimum of 50 points. Some would say that’s too excessive. Others would say it’s not strong enough. In other words, a little conflict can lead to a lot of progress.

FROM THE LAND of meaningless bewilderment: Why does the Connecticut State Golf Association continue to email my handicap updates at the start of every month? If anyone should know that it’s 17 degrees and blowing like hell outside, it’s my friends at the CSGA. If their computer is worth its weight in wires, it should know that I haven’t played a round of golf since Dec. 8 – about five weeks after the CSGA’s own cut-off point for posting scores in the Northeast.

Seriously, these emails often land at like 3:15 a.m. Even I am usually asleep by then, so I’ve got a crazy idea. Let’s put the CSGA computer to bed. Wake it up on April 1. At that point, me and Mr. Deer Antlers will try to get my number down a little.