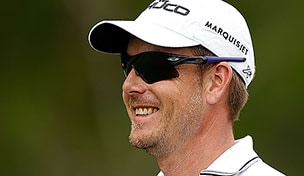 Next week Henrik Stenson will tee it up at the Masters for the eighth consecutive year – though his streak was very much in jeopardy as recently as a week ago.

Needing a high finish at last week's Shell Houston Open to crack the top 50 in the world ranking and earn an invite to Augusta National, Stenson fired a closing 66 to finish one shot behind winner D.A. Points. With momentum on his side, the Swede is looking forward to the season's first major.

'I'm really looking forward to next week,' he explained during an appearance on 'Morning Drive' Friday. 'I think it's one of the few times I really feel like I'm going to go there playing well.'

Playing well might be an understatement; with top-10 finishes in each of his last two starts, Stenson now leads the PGA Tour in driving accuracy, greens in regulation percentage and scrambling. His current form is a far cry from the slump in which he was mired two years ago.

'Obviously 2011 was a really poor season for me,' noted Stenson, who after reaching fourth in the world rankings following his win at the 2009 Players fell as far as 230th in the world in early 2012. 'I was playing poorly, didn't get much going. But that's when you need to dig deep and bounce back again.'

On his way back to relevance, Stenson admitted to using the similar plight of another European golfer as motivation.

'I looked at Lee (Westwood); he tumbled down and came back as world No. 1, so I figured that would be a good recipe,' he said of the Englishman that also fell down the rankings early in his career. 'So let's just tumble down and then bounce back.'

As he heads to Augusta, Stenson is eager to atone for his opening-round blemish a year ago. After taking the early lead at 6 under through 17 holes, the Swede carded a quadruple-bogey 8 on the home hole and never again seriously contended, ultimately tying for 40th.

'One of my main goals for the week will be to play the 18th in the first round a little better than I did last year,' he added.