Hooks and Cuts: Setting the scene 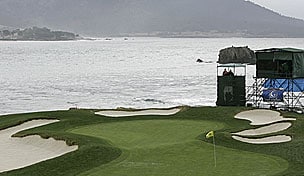 A couple of big victories by both Tiger Woods and Phil Mickelson have set the scene for what could be a tantalizing early season run up to Augusta National and the Masters.

•  Tiger Woods, it appears, finally owns his swing. But it was his command of the short game at Torrey Pines that was most telling. That had been missing. If it’s back, then he’s all the way back.

•  Phil Mickelson is a genius with a club in his hands. Genius can wander off and get lost, genius can grow disinterested, but genius can also solve problems, paint pictures and write poetry. Genius takes a spark and makes a bonfire. Genius is inspired by a challenge and a setting, as Phil was last year at Pebble Beach on Sunday alongside Tiger. Genius rides waves, as Phil did last week in Scottsdale in front of half a million fans all week.

• The beauty of golf is the varied landscapes. TPC Scottsdale was 6-inch stilettos and rock concert noise while Pebble Beach is argyle sweaters and crashing waves.

• It seems more people these days would rather surf the web than hit the links. Looking ahead, it’s hard to see a whole lot of kids getting hooked on golf when they’re hooked on iPhones.  Convincing them to spend five hours on a golf course, when they can’t go five minutes without texting, is going to be a huge challenge.

•  The PGA Tour, perhaps in an unofficial event late in the season, should sanction and promote a nine-hole tournament so the public can get comfortable with new numbers: 34 instead of 64 – or in the case of amateurs – 45 instead of 95; and maybe most importantly, two hours instead of five hours.

•  I’d be disappointed if Jim Harbaugh didn’t bark at his golf ball. And speaking of the Super Bowl, with due respect to Joe Flacco, Jacoby Jones should have been the MVP. He peeled off two of the most electrifying plays in the game’s history.

•  Fifteen-handicappers should play no more than 6,000 yards, which with smart design, can be a fun challenge for a 5-handicapper as well.

•  Among my favorite celebrity memories at Pebble Beach was ESPN’s Chris Berman hitting a hybrid about 10 yards out of heavy rough on the first hole at Spyglass. Never breaking character, he turned to our cameras and with his gravelly voice said, “Campbell’s chunky soup.”

•  Kobe Bryant’s vicious dunk against the Brooklyn Nets reminded me yet again of Tiger, who like Kobe and Michael Jordan, are cold-blooded, competitive predators.  They smell weakness and feed on it.

•  Guessing Rory McIlroy’s hit a few balls with his new clubs in the last two weeks. If he wins in the next month on top of Tiger and Phil already winning in 2013, then the hype machine kicks into overdrive for The Masters.

•  Brandt Snedeker possesses Nick Price-type rhythm and could someday have a resume to match. That might be a bit of a bandwagon leap, but his ball-striking, his body and his confidence are all growing stronger. His putting, of course, is Watson-esque, or even Faxon-ish.

•  It’s naïve to assume that PEDs couldn’t help a golfer, or that a game in which players police themselves is beyond reproach. If there are millions to be made and an edge to be gained, then guardians of any sport need to be vigilant.

•  Best celebrity golf moment I’ve ever witnessed came at the Dunhill Links at St. Andrews two years ago. Samuel L. Jackson walked to the practice tee with his clubs and a bag of balls. From behind the ropes, a fan trying to get his attention yelled over and over, “Hey Samuel, Samuel L.” It went on for about a minute. The fan was loud and relentless. Samuel L. wouldn’t look. The guy wouldn’t quit. Finally, Samuel L. stopped dead in his tracks. In full 'Pulp Fiction' mode, he glared straight at the guy and hollered, “I heard you, mother- @#%*&!”