TOC at Kapalua: Don't mess with a good thing 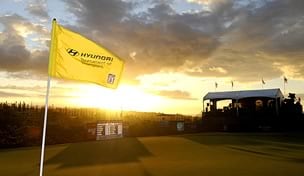 Steve Stricker was just starting to pull himself out of a deep slump in 2006 when he was reminded by his daughter, Bobbi Maria, how long it had been since he last won on the PGA Tour. She was 8 at the time and won a tournament for juniors at their home club in Wisconsin, no more than three or six holes.

''She comes home all excited and says, 'Daddy, I won, I won! We're going to Hawaii,''' Stricker once recalled.

He had to break the news to her.

Stricker was the one who had to win a tournament for them to go to Kapalua to start a new season, and he did that the following year.

As traditions go in golf, starting the year on the rugged coast of Maui is relatively new. The Tournament of Champions began in Las Vegas in 1953, moved to La Costa Resort north of San Diego in 1969 and stayed there 30 years until coming to Kapalua.

This was the 15th year the Tour has started at Kapalua, and there has never been another year like this one. A tournament that was supposed to end on Monday didn't start until Monday because of three days of powerful wind – one gust measuring 48 mph – that had the locals drawing comparisons with a 100-year storm.

About the only good that came out of such freak weather was that it took attention away, however briefly, from the Tour winners who stayed home and missed out on the endless days – the top four players in the world ranking, for starters, led by Rory McIlroy and Tiger Woods.

It's not a new problem, but it's still a problem. And it contributes to a future as cloudy as Molokai at sunrise.

Kapalua has a contract only through this year to host the tournament.

Hyundai's three-year deal as the title sponsor of the Tournament of Champions expires this year, even though corporate officials sounded optimistic about renewing, and there are strong signs it will happen.

It doesn't help that Mother Nature was in a bad mood this week. Few things in golf cause a knee-jerk reaction like bad weather.

There were suggestions to move the Pebble Beach National Pro-Am to the end of the West Coast Swing after the tournament was canceled by rain in 1996, completed nearly seven months after it started in 1998 because of rain, and shortened to 54 holes a year later because of – you guessed it – rain.

Since then, Pebble has had more than its share of glorious weather.

The rain was so bad in California in 2005 that the Nissan Open at Riviera went five days to get in 36 holes. The next week, the Match Play Championship at La Costa was postponed one day because the entire course looked like a water hazard. Woods wondered if it might not be better for the Tour to spend February in Florida and March in California. It sounded like a reasonable idea until a Champions Tour event in Florida was shortened to 36 holes because of rain.

Wiser heads will realize that golf is an outdoor sport. It's not a disgrace when weather causes problems. It's a miracle it doesn't happen more often.

The issues on Maui go beyond weather.

The Tour is going to a wraparound season in the fall, meaning the real season-opener will be in October at the Frys.com Open. There already will be six tournaments in the books before the Tournament of Champions next January.

Is that a problem? Not when you consider that for 33 years, the Tournament of Champions was held after the Masters.

Still to be determined is what he meant by location – Kapalua specific or Hawaii in general?

Kapalua tends to get the brunt of the bad weather. There can be what the locals call ''pineapple showers'' along this portion of the coast, while only 20 miles away there is abundant sunshine and less wind. Still, the Plantation Course is the only course in Hawaii that Golf Digest ranks among the greatest 100 courses in America (No. 97). It's unlike any course the Tour plays all year with dramatic changes in elevation and stunning views of the Pacific, such as humpback whales breaching and surfers at Honolua Bay.

The bigger concern is getting more players to come, though that's been an issue for years now.

Woods hasn't been back since 2005, when he started taking uninterrupted breaks in the winter. Phil Mickelson stopped coming a decade ago, suggesting the wind and slope allowed bad habits to creep into his swing. Adding to the list of absentees is Europe producing some of the best players. The European Tour season stretches deep into November, and some players simply want a long break going into the new season.

The 30-man field this year was hardly a disaster, and the leaderboard going into the final round featured a top five of Dustin Johnson, Stricker, Masters champion Bubba Watson, FedEx Cup champion Brandt Snedeker and former PGA champion Keegan Bradley. A lot of tournaments would love to have a leaderboard like that.

Years ago, an idea was tossed around to expand the field by offering a two-year exemption to the Tournament of Champions and include all past champions of the event, with the idea of getting Els and Sergio Garcia to the event because they didn't win the year before. Sure, having them at Kapalua would have helped. But the biggest mistake golf can make is to change rules around any one player, even a player like Woods.

Besides, Els and Garcia both won on the Tour last year and were eligible to start the year in Kapalua. Neither of them showed up.