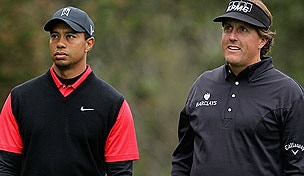 Through the first month of the 2013 golf campaign, it shouldn’t come as a surprise to see some of the game’s biggest names earn the most world ranking points so far.

Thanks to a pair of runner-up finishes, Brandt Snedeker leads all players with 77.02 total points gained, which has propelled him up to a career-best sixth in the world. Not far behind in third and fourth place for total points gained are Phil Mickelson (54.67) and Tiger Woods (50.00), respectively, as each has won a PGA Tour event already.

The big surprise is sandwiched between those players, as unsung Jamie Donaldson (58.59) has the second-most points earned so far this year.

Of course, 54.00 of those points came in one tournament when Donaldson won the star-studded Abu Dhabi HSBC Golf Championship. He is now ranked 30th in the world and second in the Race to Dubai.

Donaldson will compete in his first WGC-Accenture Match Play Championship in two weeks and is all but assured of competing in his first Masters this April.