Through 36, Masters a long way from taking shape 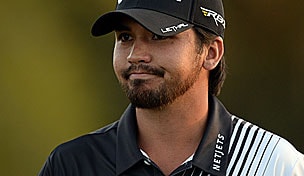 AUGUSTA, Ga. – The 14-year-old from China isn't going anywhere in a hurry. And this Masters is still a long way from taking shape.

Despite being the first player at Augusta National to get hit with a one-shot penalty for slow play, teen sensation Guan Tianlang still made history Friday as the youngest player to make the cut in a PGA Tour-sanctioned event.

And it came down to the last shot of a wild and windy day.

Jason Day could have sent the kid home early with a birdie from just off the front of the green on the 18th hole. But the Australian was wide left and tapped in for par, giving him a 4-under 68 and a one-shot lead over fellow Aussie Marc Leishman and the ageless Fred Couples.

The par meant that Guan, who had one shot added to his score on the 17th hole for his second bad time of the round – made the cut under the 10-shot rule.

He's now part of a weekend at Augusta that should be as dynamic as ever.

Day was at 6-under 138, and 18 players were within four shots of the lead, including Tiger Woods.

Woods moved into a share of the lead with a two-putt birdie on the eighth hole, and his game looked to be as sharp as ever - perhaps too sharp. Right when it looked like he might take the outright lead, Woods hit a lob wedge that was so perfect it hit the flag on the par-5 15th and caromed backward off the green and into the water. Instead of having a short birdie putt, he had to scramble to save bogey.

Woods posed over another shot on the 18th and was stunned to see it hop onto the upper shelf, leading to his second three-putt bogey of the week. He had to settle for a 71, though he was still only three shots out of the lead.

''My score doesn't quite indicate how well I played today,'' Woods said.

The 53-year-old Couples, who shared the 36-hole lead at the Masters last year, birdied the 18th hole for a 71 and will play in the final group.

Former Masters champion Angel Cabrera birdied five of his last six holes for a 69 and was in the group two shots behind, along with former U.S. Open champion Jim Furyk (71) and Brandt Snedeker (70). Woods was at 3-under 141 with six others, including Adam Scott (72), Lee Westwood (71) and Justin Rose (71).

And still in the mix was Rory McIlroy, who turned his fortunes around with a 5-wood from about 275 yards that set up a short eagle putt. He added three more birdies on the back nine and had a 70, leaving him only four shots out of the lead going into the weekend.

''Anything under par today was going to be a good score,'' McIlroy said.

The hole locations were severe in spots, with one pin tucked on top of a mound toward the front of the fifth green. The par 5s played into an opposite wind on the back nine, and they were not easy to reach. Furyk got home in two on the 15th hole Thursday with a hybrid. He used that same club to lay up on Friday.

Such tough conditions made the performance of Guan that much more impressive. He had a respectable 75, which included the one-shot penalty.

And for the longest time, it looked as though it might be costly.

Guan, playing with Matteo Manassero and Ben Crenshaw, was informed his group was out of position as it left the 10th green. They were on the clock on the 12th hole, meaning players would be timed to make sure they hit their shots within the 40-second limit. The teen got his first bad time with his second shot on the 13th hole, and it was clear he was in trouble after his shot into the 17th when John Paramor, chief referee in Europe, walked out to speak to him.