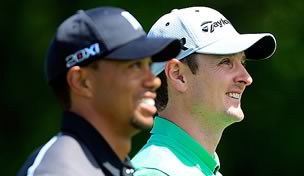 ORLANDO, Fla. – It’s one thing to be overshadowed. It’s another to be so far under the radar that even a Florida state trooper wouldn’t catch you zooming past the crowd to the top of the leaderboard.

Thursday’s opening round of the Arnold Palmer Invitational may have produced the quietest 65 by a top-five player in recent memory. It wasn’t Justin Rose’s fault. He played almost flawless golf. When it came to drawing eyeballs, though, it was a matter of what Sergio Garcia once famously summarized as, “I'm playing against a lot of guys out there, more than the field.”

Rose’s one-eagle, six-birdie performance was finishing up right about the time our country’s annual office shutdown began, with NCAA Tournament basketball games hardly being lost in the shuffle against his sublime round.

Not that the Englishman would have been preoccupied. When asked whether he filled out a bracket, Rose admitted that he hadn’t, though he was aware of the process, then countered, “Are we talking college here? No, I’m not really up on that.”

Then there’s the fact that he competed alongside Tiger Woods in the first round – the same Tiger Woods who posted a solid 3-under 69 total. With two wins under his belt already this season, in order for a playing partner to steal attention from Tiger, they’d have to be Kate Upton.

Oh, speaking of which, she’s on her way here. That’s right – the Sports Illustrated swimsuit cover girl is coming to hang with Arnie at his home event.

So, yeah, it’s pretty safe to say despite his ridiculously low round, Rose was overshadowed.

Then again, that may actually serve as a microcosm for this event.

There are plenty of regulations and stipulations in the official Rules of Golf – too many maybe – but one of the most important remains unwritten: You do not disrespect the King. Especially when you’re at his castle, amongst his loyal subjects, admiring his jewels.

This is meant as no disrespect, but to put the Arnold Palmer Invitational in terms of that other tournament taking place this week, this one serves as a de facto conference championship for the elite, prior to competing in the Big Dance.

Despite winning here seven times previously, Woods repeatedly tells anyone who will listen that he’s trying to peak for the four major championships. With the first of those just a few weeks away – and many top players not competing again between now and then – this week can be a final opportunity to get ready for the upcoming Masters.

But Rose doesn’t look at it that way.

“I don’t think I’m there yet,” he claimed. “I’m not at the point in my career where I solely focus on the majors. Yes, I try to do my best to get ready for them as best I can and you look at the schedule with that in mind, but winning more regularly is something I want to do. If you’ve got 15 PGA Tour events under your belt, then you think, OK, 16 doesn’t mean as much. It’s now time to win the big ones. I’m not at that point yet, but I still believe that it can happen at any point.”

So instead of peaking four times per year, he wants to peak every week?

“It’s playing enough to give yourself the best chance every single week you play. And you play the averages a little bit, too. I’m getting to the point hopefully where I can carry that off, but you never know when the game is going to get sharp, so you’ve got to play. At some point, you’re going to get hot.”

“I don’t really know how to totally do it for golf,” Sean Foley, who coaches Rose and Woods among others, said about peaking around majors. “But I know in other sports, for example, Michael Phelps isn’t swimming fast two weeks before the Olympics. Sprinters don’t want to set world records two weeks beforehand. But I don’t know how you do that in golf.”

In other words, there’s no way for an elite player to lay off the gas pedal prior to reaching Augusta National – or at least none that’s tangible.

What it means is that there’s no definitive disadvantage to Rose peaking for the equivalent of golf’s conference championship prior to the Big Dance.

“I’ve got a good chance to go in there with my game in good shape, which it should be,” Rose said. “I’m in control of all those areas right now. I just need to make sure I’m mentally fresh. I’m taking two weeks off, which I haven’t done before, but I feel like I’ve played enough golf to be sharp.”

Moral of the story? Good golf is good golf, no matter if it’s overshadowed. On Thursday, Rose’s score looked like Kate Upton on the leaderboard.