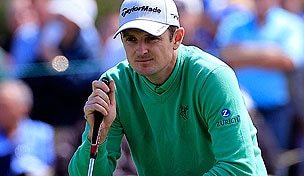 Though chilly and damp conditions led to some high scores early in the day Thursday, Justin Rose was able to make quick work of things. Here's the skinny heading into the second round of the Arnold Palmer Invitational, where the Englishman holds a two-shot lead on the heels of an opening 65:

What it means: Playing alongside Woods in the morning wave, Rose got off to a hot start and remained out in front at day's end. On the heels of top-10 finishes at both PGA National and Doral, the Englishman appears poised for another high finish this week, but several big names loom just a few shots back.

Round of the day: Beginning his round on the 10th hole, Rose started slowly before an eagle at the par-5 16th was followed by a birdie on the par-3 17th. Four consecutive birdies from holes 4-7 put him out in front of the pack, a position he maintained throughout the day. In total, Rose carded six birdies and an eagle against just one bogey, with his lone blemish coming on the 11th, his second hole of the day.

Best of the rest: A winner a year ago at the Mayakoba Classic, Huh also started on the back nine, carding a 5-under 31 that featured birdies on holes 16, 17 and 18. He added another birdie on the fifth hole before his only bogey of the day on the par-4 ninth, closing with a 5-under 67 to grab second place after 18 holes.

Biggest disappointment: Reigning U.S. Open champion Webb Simpson has gotten off to a solid start this season, having notched six top-20 finishes in eight starts so far this year. His opening round was anything but solid, though, as Simpson failed to make a single birdie en route to an 8-over 80 that was better than only two players Thursday.

Main storyline heading into Friday: Can Rose stay out in front? Playing in the afternoon wave, the Englishman will have a target squarely on his back as low scores should be attainable in the second round. He'll also have Woods, the seven-time API champion, walking stride-for-stride with him Friday, likely intent on ensuring that Rose remains within sight heading into the weekend.

Shot of the day: While many players were able to card eagles at the downhill, par-5 16th, Haas managed to get one at the more difficult sixth hole. After laying up to 117 yards at the dogleg-left par-5, Haas sent a wedge over the lake guarding the green that managed to find the hole for an eagle 3, helping the Wake Forest grad to a 3-under 69 Thursday.

Quote of the day: 'If you had said I would shoot a 65 on the range this morning, I would have probably said, 'How many holes have I played?' And that didn't change much.' - Rose