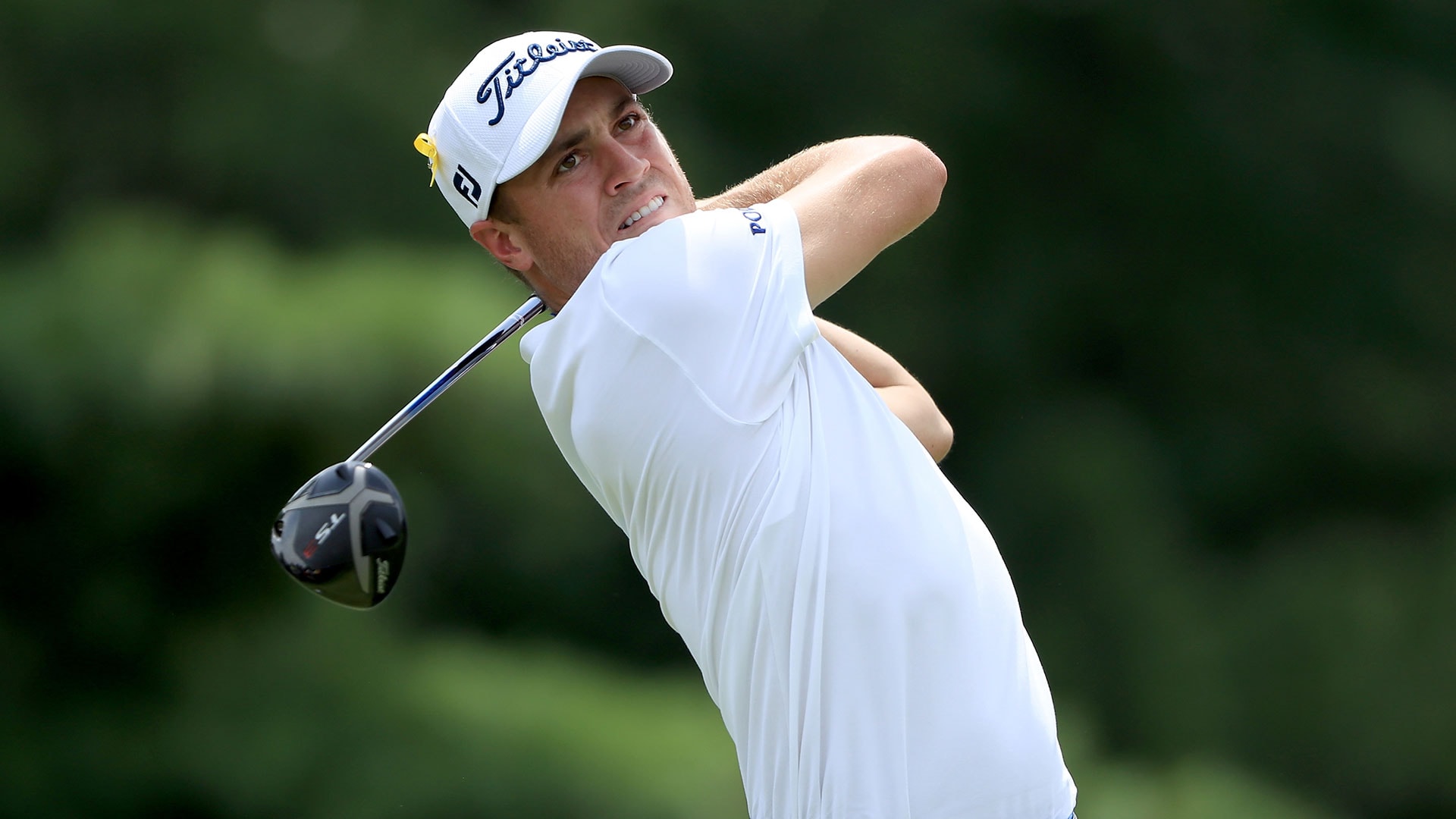 AKRON, Ohio – Nobody has a better scoring average Saturday on the PGA Tour than Tiger Woods, and the Bridgestone Invitational would be a good time to keep that up.

Neither will Rory McIlroy, Jason Day or anyone else wanting to keep pace.

Tommy Fleetwood took advantage of another soft day of good scoring at Firestone with a 7-under 63. So did PGA champion Justin Thomas, who was particularly sharp with his putter for a 64. They shared the lead with Ian Poulter, who had a head start with his career-low 62 and backed it up decently enough Friday with a 67.

They all played early and finished at 11-under 129.

No one could catch them, mainly because there was just enough breeze to cause just enough doubt.

Even so, 45 players from the 71-man field were under par, a rarity at Firestone. Woods, whose last victory was five years ago when he won this World Golf Championship for a record eighth time, got within four shots of the lead with a tee shot to 2 feet on the par-3 12th hole. He went 1 over the rest of the way for a 68, leaving him five shots behind.

Is another Saturday move in the works.

''I'm going to have to,'' Woods said. ''The golf course is playing very soft, very receptive. And when you're able to hit 5-irons and they only roll out about a foot, the guys are going to put up good scores. There's 40-plus guys under par. That's never the case here at Firestone. So tomorrow is going to be one of those days I'm going to have to go out there and post a low one and see what happens.''

Fleetwood, the runner-up at the U.S. Open, was most pleased to see nothing higher than 4s on his scorecard. He made it look easy, except for a few times he was slightly out of position, and hit perhaps his best shot with a 6-iron to a back-left pin that settled 3 feet below the cup.

''My irons, I just tended to hit exactly where we were picking the spots and I holed a few putts,'' Fleetwood said. ''You've got days like that where it's going well, and you've just got to make the most of them.''

Day, who threw away a chance to win at Firestone two years ago, did make as many as he would have liked. He still had a 66 playing in the same group with Woods, and joined Kyle Stanley (68) two shots behind the leaders.

McIlroy was another shot behind after a finishing a day of frustration with two birdies. He was in position to make birdies, especially that 380-yard drive he launched at the 482-yard eighth hole that left him only a sand wedge in. It came up short, rolled down a slope and left him 45 feet away. He blasted a 319-yard drive down the middle at the 10th, only to hit sand wedge just over the green and made bogey.

His finish began with a tee shot on the 17th hole that landed closer to the 16th fairway. His approach went into the front bunker, and he holed out for birdie. Then, he stuffed one on the 18th for another short birdie at a 67.

''An adventure to say the least,'' McIlroy said. ''I was 1 under standing on the 17th tee and I think if I had to finish 1 under, it would have felt like the worst I could have shot today. So to get those two birdies on the last two holes is obviously very nice and gets a couple closer to the lead.''

Woods opened with a bogey, bounced back with three birdies over his next four holes and looked like he might make a move with his birdie on the 12th. Two holes later, he faced such an awkward lie from the top collar of a bunker that he wasn't sure how to stand or how hard to hit it. He hit it too hard, through the green, made bogey and missed birdie chances coming in.

This is only the fourth time he has been five shots or closer going into the weekend this year, but there are plenty of others around him. Also five shots back were Jon Rahm of Spain, who had a sloppy finish for a 70, Tony Finau (68) and Players champion Webb Simpson (65).

The only regret for Thomas was a mistake that didn't cost him as much as it could have. He was in the rough off the tee at the par-5 16th and still had some 284 yards to reach the green, with a pond in front. The distance wasn't an issue, but Thomas said later that odds were against him making a birdie, and the safer route would have been to lay up and rely on his wedge.

He hit 3-wood too far right and into the water.

''We were lucky to get up-and-down for 6, but that was a stupid decision,'' Thomas.

The rest of his game, especially with the putter, was sharp.

''It was definitely one of the better putting days I've had in a while,'' Thomas said. ''I just hit a lot of quality putts. That's what's most important. I've had days where I've missed more but putted better. ... To me, that's not as frustrating as what I was doing yesterday - just hitting bad putts.''