Malaria not scaring LPGA pros away from Asia 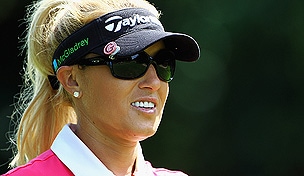 PHOENIX – Natalie Gulbis’ bout with malaria doesn’t seem to be scaring any LPGA pros from future trips to the tour’s Asian swings.

Gulbis was bit by a mosquito during the Honda LPGA Thailand three weeks ago and contracted the disease. She told Golfchannel.com Wednesday that she’s rebounding very well, though she did withdraw from this week’s RR Donnelley LPGA Founders Cup after symptoms recurred earlier this week.

The LPGA will return to Asia again for the fall swing with events scheduled in China, Malaysia, South Korea, Taiwan and Japan.

“It’s just one of those things, it doesn’t matter where we go or what we do, there are things out there that you just can’t control,” said Julieta Granada. “It’s life. We have dengue fever that you can get from mosquitoes in South America.

“The Asian swing for us is great. We love going to Asia. We have such great fans over there and great sponsors. This won’t make me think, `Oh my gosh, I’m not going.’”

Katherine Hull said she won’t be canceling any travel plans for the Asian swing.

“It’s more dangerous getting in a car in Thailand than being bit by a mosquito there, the way you see how they drive,” Hull said. “You’re more likely to get in a car accident there than get malaria.”

In fact, Paula Creamer got whiplash in a crash Thailand last month.

“You can pick up something anywhere,” Gerina Piller said. “We have West Nile here in the states. It was just one of those freakish things.”

LPGA commissioner Mike Whan conducted a players meeting Tuesday night where he updated Gulbis’ condition and talked about malaria. To alleviate concerns, the tour arranged for Scottsdale Healthcare doctors to do screenings in the locker room on Wednesday. Approximately 20 players, caddies or staff took advantage Wednesday. No other players are known to have contracted malaria.

“Our local healthcare sponsor of this event was in the locker room all morning providing blood tests for anyone who wanted them, players, caddies, family members, rules officials,” Whan said. “Anybody who thought they might have symptoms, or just wanted to know, they have a test to determine pretty quickly if you do or don’t have this parasite.”

While there is no vaccination against malaria, Whan said the LPGA's medical experts will look for ways to try to help players reduce risks.

“When you hear something like this, the first thing you ask is if the player is OK, and if there’s anyone else at risk,” Whan said.

Gulbis said she was grateful for the help the LPGA offered and is hoping to return to competition at the Kraft Nabisco Championship.