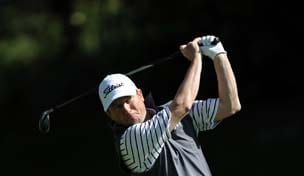 Getty Images
PACIFIC PALISADES, CA - FEBRUARY 17: Tim Clark of South Africa hits a second shot on the 12th hole during the second round of the Northern Trust Open at the Riviera Country Club on February 17, 2012 in Pacific Palisades, California. (Photo by Harry How/Getty Images)  -

In a global golf scene dominated by rankings, standings and points, simply earning spots in some of the more elite fields each season can be an accomplishment in and of itself.

With the season's first World Golf Championship under way, two more key events loom within the next two months: the WGC-Cadillac Championship, March 7-10 at Doral, and The Masters, contested April 11-14. Several players who were able to pull off first-round upsets Thursday currently find themselves in neither field, but may be able to qualify for one – if not both – with a strong run this weekend at Dove Mountain.

There are a few ways still remaining to make the field for Doral: all players inside the top 50 of the official world golf ranking on both Feb. 25 and March 4 will be eligible. Likewise, players inside the top 10 in the Race to Dubai standings on Feb. 25 – and the top 10 players from the FedEx Cup standings on March 4 – will qualify. The latter avenues will likely grant spots to Richard Sterne (currently No. 1 in Race to Dubai standings), Russell Henley (No. 6 in FedEx Cup) and Charles Howell III (No. 7 in FedEx Cup), who are all currently outside the OWGR top 50.

Another win in Arizona, though, could do wonders for players like Tim Clark and Shane Lowry, who are both not yet in the Cadillac field and currently sit at Nos. 61 and 68, respectively, in the world ranking.

As the event features no 36-hole cut, making the field at Doral means a guaranteed paycheck – and guaranteed OWGR points. The latter holds perhaps greater importance as the season's first major approaches, since outside of winning a PGA Tour event before April, the OWGR is likely the only other option remaining for earning a berth at Augusta National. The top 50 in the world ranking the week prior to the Masters will earn a trip down Magnolia Lane, a cutoff that Ernie Els notably missed by a narrow margin one year ago.

Several players not yet qualified for The Masters – and currently outside the top 50 – pulled off upsets Thursday and can take a big step with a win Friday toward making travel plans for Georgia in April. That group includes Alexander Noren (currently 51st), Marcus Fraser (54th), Sterne (57th), Rafael Cabrera-Bello (60th), Clark, Howell (66th) and Lowry.