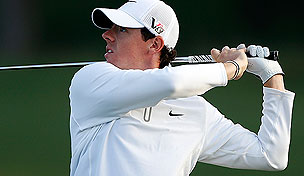 HUMBLE, Texas – At approximately 4 p.m. local time Friday, Rory McIlroy made an 11th-hour decision to commit to next week’s Valero Texas Open in an attempt to get in more rounds prior to the Masters.

After opening with rounds of 73-70 at the Shell Houston Open, McIlroy maintained this week that his play will improve once he gets a few more rounds under his belt.

However, even directly after a morning round that flirted with the cut line, the world’s No. 2-ranked player didn’t sound like he was contemplating another week of competition.

“No one likes missing cuts and especially it's my last one before the Masters,” he explained. “Nice to have another couple of rounds, do some work on the range this afternoon and hopefully improve on the course that I've already done.”

McIlroy has been criticized for choosing to play a sporadic schedule so far this season, especially after switching to Nike equipment to start the year.

Previously, McIlroy had committed to traveling to Haiti next week, part of a humanitarian mission that he first embarked upon two years ago. It is unclear whether that trip has been rescheduled.

In four previous starts, he owns a T-8 at the WGC-Cadillac Championship and a first-round exit at the WGC-Accenture Match Play Championship to go along with a withdrawal and a missed cut. Assuming two more rounds here in Houston this week, he will have played 12½ total competitive rounds prior to the Valero Texas Open.

Unlike in previous years, when the Shell Houston Open directly preceded the Masters, this year’s calendar has an extra week between those events, which was filled by the San Antonio-based event. Ian Poulter, Charl Schwartzel, Matt Kuchar and Jim Furyk are among those also scheduled to compete in the field.