New York Mets outfielder Yoenis Cespedes is off to a slow start this season, and he has a theory as to why he's struggling at the plate: a lack of golf.

Cespedes, a two-time all-star, has been an avid golfer since defecting from Cuba in 2011. But this year, he cut out his time on the links as part of an overhauled training regimen and according to the New York Times hasn't played since June. But Cespedes is struggling, hitting just .195 with four home runs through the first month of the season.

And according to Cespedes, his work in the two sports is related, as he has reportedly diagnosed himself with a "golf deficiency."

"In previous seasons, one of the things I did when I wasn't going well was to play golf," Cespedes said. "This year, I'm not playing golf."

Cespedes' relationship with his newfound hobby is well-documented. He played a round of golf the same day the Mets clinched the National League pennant back in 2015, and the following year he raised eyebrows by playing a round at Medinah only hours before he left a night game because of injury.

Despite a slow start from one of their top players, the Mets have gotten off to a 14-6 start to lead the National League East division. But they'll likely need Cespedes to start shouldering his load soon, and the solution just might be a quick trip to the course.

"With golf, I had to keep my hands inside and keep watching the ball in order to hit it well," Cespedes said. "I think that helped me." 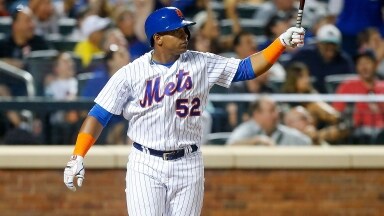 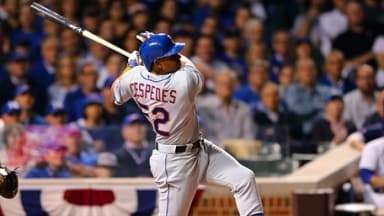 Mets' Cespedes: Round at Medinah didn't cause injury

New York Mets outfielder Yoenis Cespedes insists that his Wednesday round at Medinah didn't result in the shoulder injury that forced him out of Game 4 of the NLCS.