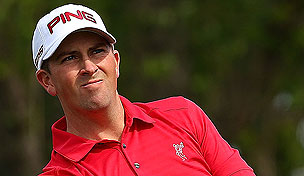 With wind making the course play longer and the water look even more daunting, Guthrie held on for a 1-over 71 in his first time playing in the last group on Tour. The 22-year-old from Illinois closed with eight good pars. Thompson narrowly missed a 20-foot eagle putt on the par-5 18th hole for a 70.

They were at 8-under 202, and had to buckle down for what figures to be a wide-open final round.

Lee Westwood chipped for an unlikely birdie on the 14th hole, made a 20-foot birdie on the 17th and salvaged a par despite hitting 3-wood into the water on the final hole for a 70 that left him only two shots behind. Geoff Ogilvy also had to work hard for a 70, starting with three bogeys on the opening four holes. Ogilvy made a 7-foot birdie putt on the 18th to join Westwood at 202 and give him a great chance to erase a miserable West Coast swing.

Eleven players were separated by four shots going into the final round, a group that included Rickie Fowler, Charles Howell III, Keegan Bradley and Justin Rose.

Missing from the mix was Tiger Woods.

Woods had hoped to post a low score to at least get into contention and was headed that way with a 32 on the front nine. But he didn't make another birdie the rest of the way, and took a double bogey on the par-3 17th when his shot plugged into the bank short of the green and he never found the ball. He wound up with a 70, not a bad score under the conditions, but not good enough to achieve what he wanted. He was eight shots behind.

Woods was nine shots out of the lead a year ago after 54 holes, closed with a 62 and was runner-up by two shots to Rory McIlroy.

Instead of the No. 1 player at the top of the leaderboard, there is a pair of players who have never won on the PGA Tour, two players who realized that a victory Sunday would get them into The Masters. Thompson (pictured) hasn't been to Augusta National since 2008 as a U.S. Amateur finalist.

If the wind is anything like it was Saturday, it could be a matter of hanging on – and not just for them.

''Even par for the day was never going to go backward,'' Ogilvy said. ''It was only going to go forward, and I did that.''

Proof of that was the scoring. No one among the last 20 players to tee off Saturday broke par. Former PGA champion Y.E. Yang had a 67, the low score of the third round, and moved up 36 spots into a tie for seventh.

Westwood made a pair of sloppy bogeys to end the front nine and was in danger of falling too far behind until a 33 on the back nine got him back in the game. Just as key was getting through the 10th and 11th holes with par.

The par-4 11th, with the second shot over a lake, played so difficult that it yielded only one birdie among 75 players – a 35-foot putt by Yang – and played to an average score of 4.8, which was higher than both the par 5s at PGA National.

The 10th played just over 500 yards as a par 4 and into the wind, so tough that Ogilvy had to hit 3-wood for his second shot.

''I like my chances regardless of the conditions,'' Westwood said. ''I'm playing nicely. Just got a couple of mistakes I made today, but other than that, I'm playing solidly. I have to start making a few putts. I had a lot of chances to make putts that just grazed the hole. I like being out late on a Sunday and having a chance.''

Five of the nine players within four shots of the lead could get to the Masters with a win, and that would be particularly meaningful to Howell, who grew up in Augusta. He was five shots out of the lead, until making a 20-foot birdie on the 15th and coming close to the water on the 18th, stopping short of a bunker for an up-and-down birdie that gave him a 71.

Fowler had a 69 and finished nearly two hours before the leaders. When the round was over, his name was prominently on the leaderboard. He will play in the final round with Howell in the third-to-last group.

''The biggest thing is being within a few shots going into the back nine tomorrow,'' Fowler said. ''That's where the tournament really starts.''