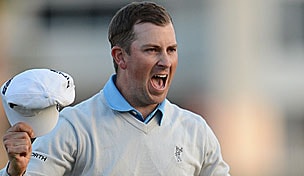 The reality was much different Sunday in the Honda Classic.

He had a one-shot lead as he stood in the 18th fairway, some 240 yards from the flag with trouble in the way in the shape of large lake. The motto from his golf team at Alabama was to ''finish strong,'' and Thompson did just that.

Instead of laying up, he drilled a 5-wood into the bunker left of the green, setting up a simple sand shot and a birdie he didn't even need. He closed with a 1-under 69, one of only five rounds under par on a punishing day at PGA National to finally become a PGA Tour winner.

''That for me kind of sealed the deal,'' Thompson said. ''It allowed me to walk up the fairway and enjoy the experience, see the crowd and ... just finish strong.''

The start wasn't bad, either.

Thompson holed a 50-foot eagle putt on the third hole, relied on a superb short game around the toughest part of the golf course to build a four-shot lead, and hung on for a two-shot win over Geoff Ogilvy that takes him places he always wanted to be.

He gets into his first World Golf Championship next week at Doral, and qualifies for two more WGCs this year at Firestone and in Shanghai. He's in the PGA Championship, gets to start next year in Hawaii and earned a two-year exemption on the PGA Tour.

And to think just two weeks ago he was so down after a 78-80 performance at Riviera that he wondered if he would ever make another cut.

''This week was magical,'' Thompson said. ''Just had a groove and kept feeling it.''

It turned out to be a big week for Ogilvy, too.

The former U.S. Open champion missed his past four cuts and had plunged to No. 79 in the world ranking. He already missed the Match Play Championship and was ready to miss another WGC event next week at Doral until putting together four solid rounds.

He chipped in for birdie behind the 16th green and two-putted for birdie on the 18th for a 69 to finish alone in second, moving him up to No. 47 to get into Doral.

Ogilvy has to stay in the top 50 by the end of the month to return to Augusta National. For now, he has smaller problems – he only packed enough for this week.

''I'm going to have to go do some laundry,'' Ogilvy said. ''I haven't got a hotel room for tonight. But half the Tour lives in this area, so I'm sure I can find somewhere to stay.''

Luke Guthrie, tied with Thompson for the 54-hole lead, fell behind with a bogey on the second hole and closed with a 73 to finish third.

Tiger Woods was never in the picture. He started the final round eight shots behind, and whatever hopes he had of a rally ended on the sixth hole when he hit his drive so far to the right that the ball was never found.

Woods took double bogey, and only an eagle on the final hole kept the damage to a minimum. He closed with a 74 – his first time since the Masters last year that he failed to break par in any round of a 72-hole tournament – and tied for 37th.

It was the second straight year Woods closed with an eagle at PGA National – the difference was last year, it gave him a 62 and a tie for second.

Despite a bogey on the final hole, Erik Compton had a 70 and was part of the five-way tie for fourth. Compton, who already has had two heart transplants, earned his first top-10 finish on the PGA Tour.

Thompson finished at 9-under 271, a strong performance considering the difficult course and the weekend wind. He was among three players who never shot over par at PGA National.

''You don't have to do much wrong to be making a bogey out there, so it's pretty impressive,'' Ogilvy said of Thompson's final round. ''It's a great effort, really. As you saw by the rest of the scores, it's a very hard golf course and it seems to get progressively harder in some ways. There's a disaster waiting everywhere.

''There's a lot of golf courses on Tour that it might be easy to close out a golf tournament – or easier – but this is not one of them.''

Thompson was at his best in the middle part of the final round.

He hit a tough chip off the pine straw to 3 feet for par on the 10th, and then hit flawless chips for easy pars on the 11th and 14th holes to build a four-shot lead. Not even the late run by Ogilvy was enough to stop him.

''This is everything,'' Thompson said. ''This is a childhood dream come true. I've dreamed of playing out here since I was 7 years old and to win, it's just unbelievable. I just can't put it into words. The whole day was awesome.''

It was a mess for Woods.

''I just made too many penalties this week,'' Woods said. ''Today is a perfect example. I didn't play that poorly. I had two water balls and a lost ball. Take those away, and I missed two short birdie putts, and it was actually a decent score. So just got to clean up my rounds.''

The final round was never going to be easy with the wind whipping on PGA National, and it showed. Of those who finished before the leaders even teed off, only two players managed to break par. Scoring was so difficult that Lucas Glover played the weekend in 2-over par and still tied for fourth.

''You don't move up very often – on Tour – over par on the weekend, except for a place like this,'' Glover said.

Guthrie, who fell behind for good with a bogey on the second hole, did his best to stay in range until hitting his tee shot out of bounds on the 14th for a double bogey. From there, it was only a battle for second place.

Everyone else was long gone.

Westwood failed to save par on consecutive holes on the front nine and could never catch up. Charles Howell III, who started the day three shots behind and needed a win to get to the Masters in his hometown, fell apart on the back nine with a 41 and closed with a 78. Rickie Fowler made three bogeys on the first six holes and was never a factor.