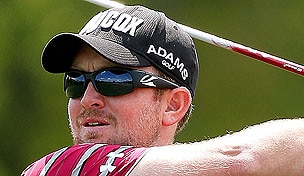 HUMBLE, Texas – How dire is Steve Wheatcroft’s situation this season? Well, he owns only partial status on Tour.

No, not the PGA Tour. That would be the Web.com Tour, where he can get into only a limited number of events.

One week removed from never getting off the alternate list at the Web.com’s Chitimacha Louisiana Open, Wheatcroft decided to try to Monday qualify for this week’s Shell Houston Open and grabbed one of the four spots available in this week’s PGA Tour event.

He’s making the most of it.

With a pair of 5-under 67 rounds, Wheatcroft owns a one-stroke advantage over Jason Kokrak and D.A. Points entering the weekend.

Wheatcroft, who played full time on the PGA Tour last year, can solve a lot of problems by winning this week. Though he’s never won out here before, he does own two Web.com Tour wins, including one by a mammoth 12 strokes.