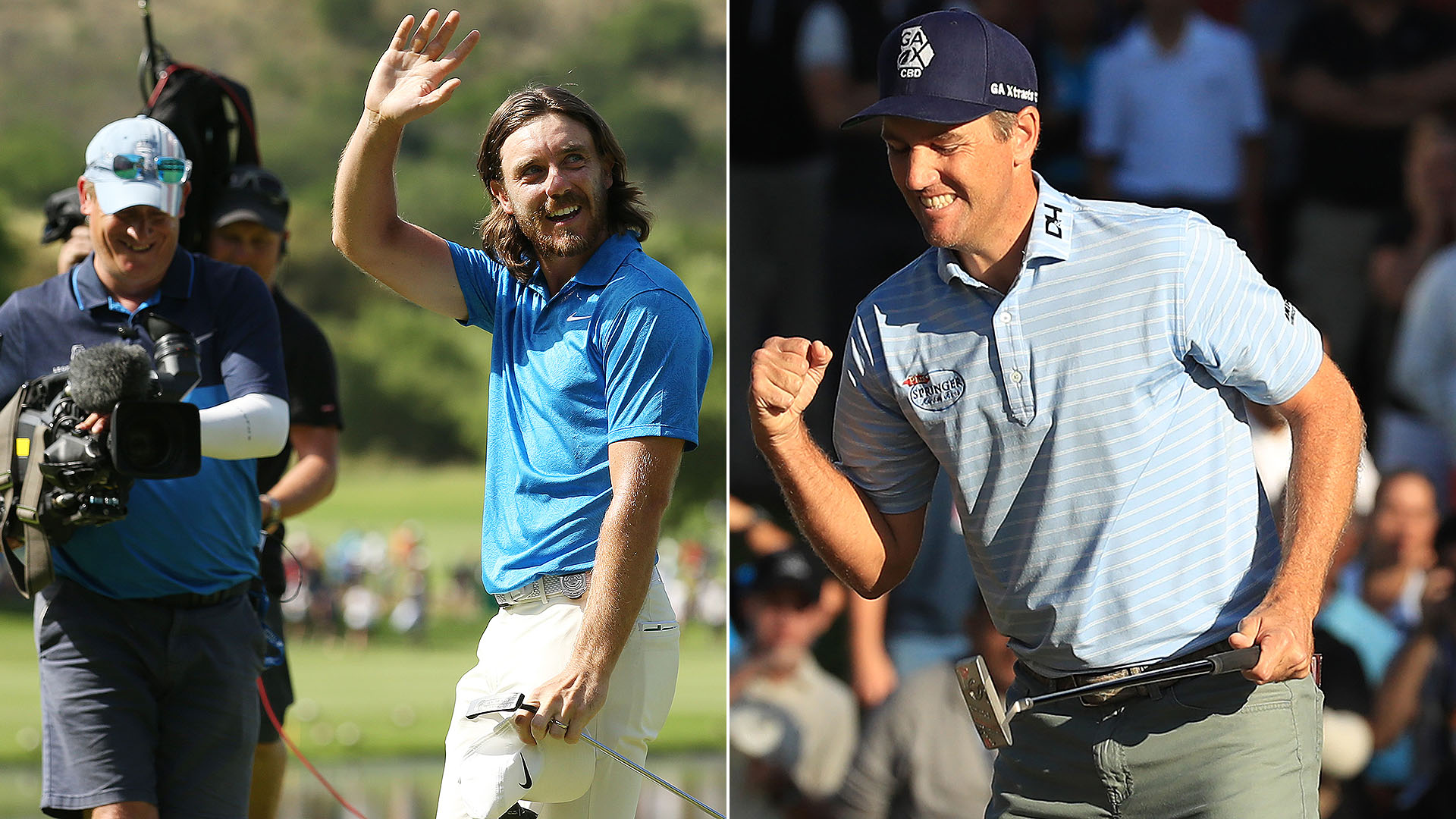 Brendon Todd keeps his foot on the gas, Tommy Fleetwood gets over the finish line, Jason Day has more questions than answers, "toxic smog" enters the golf lexicon and more in this week's edition of Monday Scramble:

A breakthrough victory is one thing. But to turn it into another trophy, as Todd did Monday morning at the Mayakoba Golf Classic, speaks to the level of confidence he now possesses after successfully navigating his way through the wilderness.

Much was made of Todd's win two weeks ago in Bermuda, which came after he had spent the previous three years battling full-swing yips without status. But rather than rest on his laurels, he made the most of another opportunity by eking out a one-shot win in Mexico.

Outside the top 500 in the world at the start of the month, Todd is now up to 83rd in the rankings, heading back to the Masters in the spring and might only have to stay upright for another nine months to earn a trip to the Tour Championship.

"The confidence that gave me, winning in Bermuda and putting up four rounds in the 60s, it's natural to take that confidence to the next event," Todd said. "This one's really special." 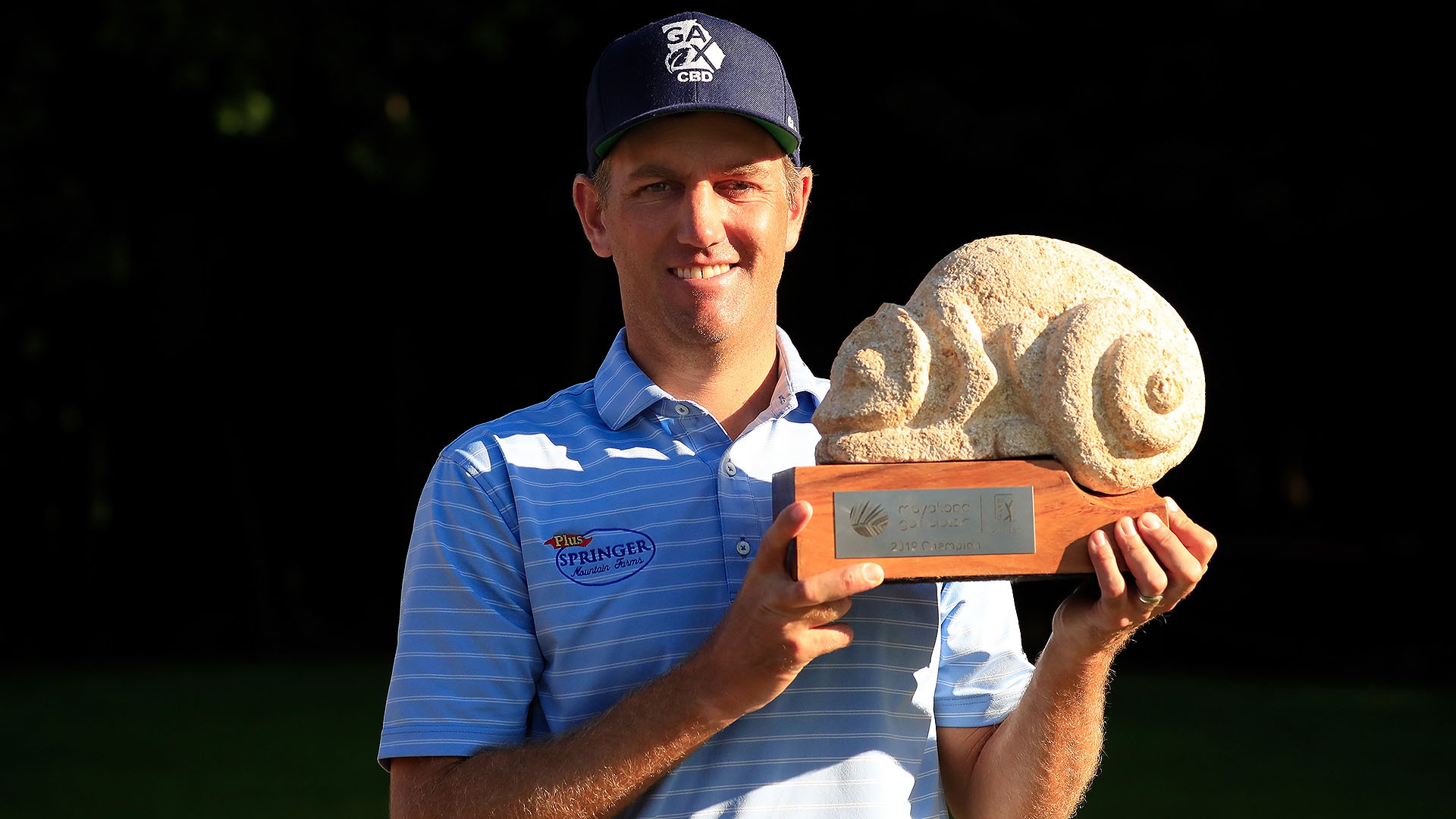 1. Todd now becomes the poster child for what the PGA Tour hopes the fall portion of the season can do.

This is the seventh season featuring the wraparound schedule, and this year's lineup expanded to 11 total events thanks to an earlier Tour Championship. Todd is the first player to win twice in the same fall stretch.

Todd got a two-year exemption for his Bermuda win and added another year thanks to his Mayakoba triumph. It means that, months after playing Korn Ferry Tour Finals with hopes of securing PGA Tour status for 2020, Todd is now fully-exempt on the main circuit through 2023.

That's the kind of quick-fix scenario the Tour hopes could bolster fall events in the future and get more big names to play more often as the calendar year draws to a close.

2. The win also leads to this question: Should Brendon Todd be considered for the Presidents Cup?

Yes, the American team is already set, but the status of world No. 1 Brooks Koepka is still not certain. One potential replacement, Rickie Fowler, wasn't able to go last week in Mexico because of a bacterial infection and another possible pick, Kevin Na, hasn't done much of note since his win in Las Vegas.

That leaves Todd as perhaps the hottest golfer on Tour during a period where many top players are putting things in cruise control. He might deserve some consideration, although it would still be hard to leave 2017 Presidents Cup participant and match-play specialist Kevin Kisner at home.

Of course, there's also the prevailing notion that Tiger Woods could just roll with 11 players instead of 12 should Koepka withdraw and still come out on top at Royal Melbourne. 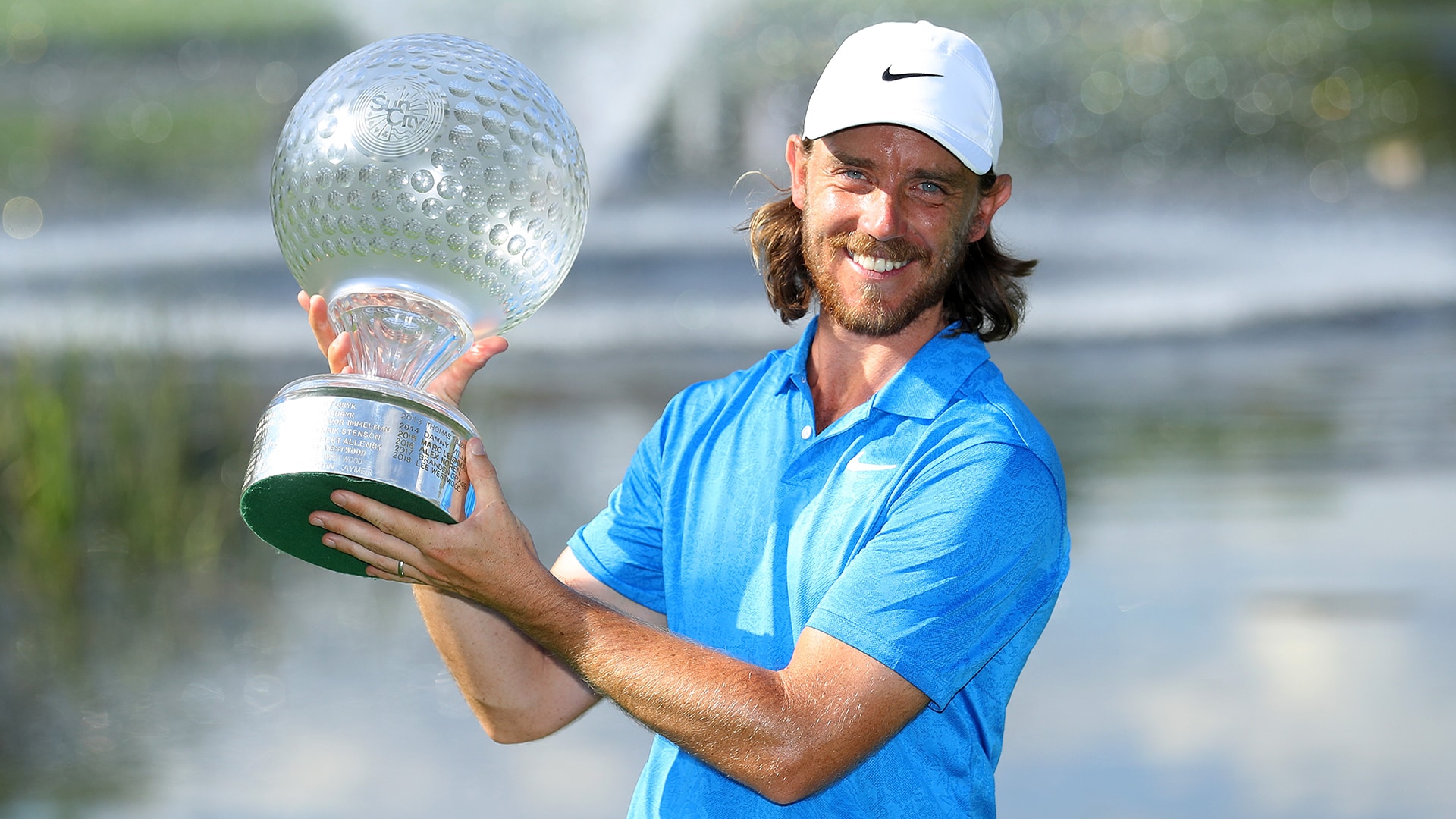 3. Tommy Fleetwood's season is a testament to how much attention goes to the trophies.

The Englishman was a runner-up at Royal Portrush, and he made it to the Tour Championship for the second straight year. He hasn't missed a cut in nearly 18 months, playing the weekend in 41 straight worldwide starts.

But he also hadn't won in that span, meaning that Fleetwood's consistency was overshadowed by the hardware hauls of some of his peers. He won't have to worry about that perception after the Nedbank Golf Challenge, where a trio of final-round eagles got him into a playoff with Marcus Kinhult.

After 11 months of solid play while others edged past him into the winner's circle, this time it was Fleetwood who took top honors (and a hefty $2.5 million prize).

4. Fleetwood's win was also a timely one, given that it lifted him into second place in the Race to Dubai standings heading into the season finale.

Fleetwood captured the season-long prize two years ago, and now he'll start in Dubai ahead of players who by various other metrics may have enjoyed stronger 2019 seasons: chiefly Rory McIlroy, Jon Rahm and Shane Lowry.

"The closer it gets to the end of the season, the harder it gets to stay in the present, do your things, concentrate on what you do best," Fleetwood said. "But I'm happy for the challenge. I feel like I'm ready. I mean, I might go out next week and play terrible, but it's golf."

The man that Fleetwood and the other contenders will be chasing: Austria's Bernd Wiesberger, who has won three times this season and increased his lead to 700 points after a T-3 finish in South Africa. Only five players remain in the mix to win the Race to Dubai, a list that doesn't include FedExCup champ McIlroy. 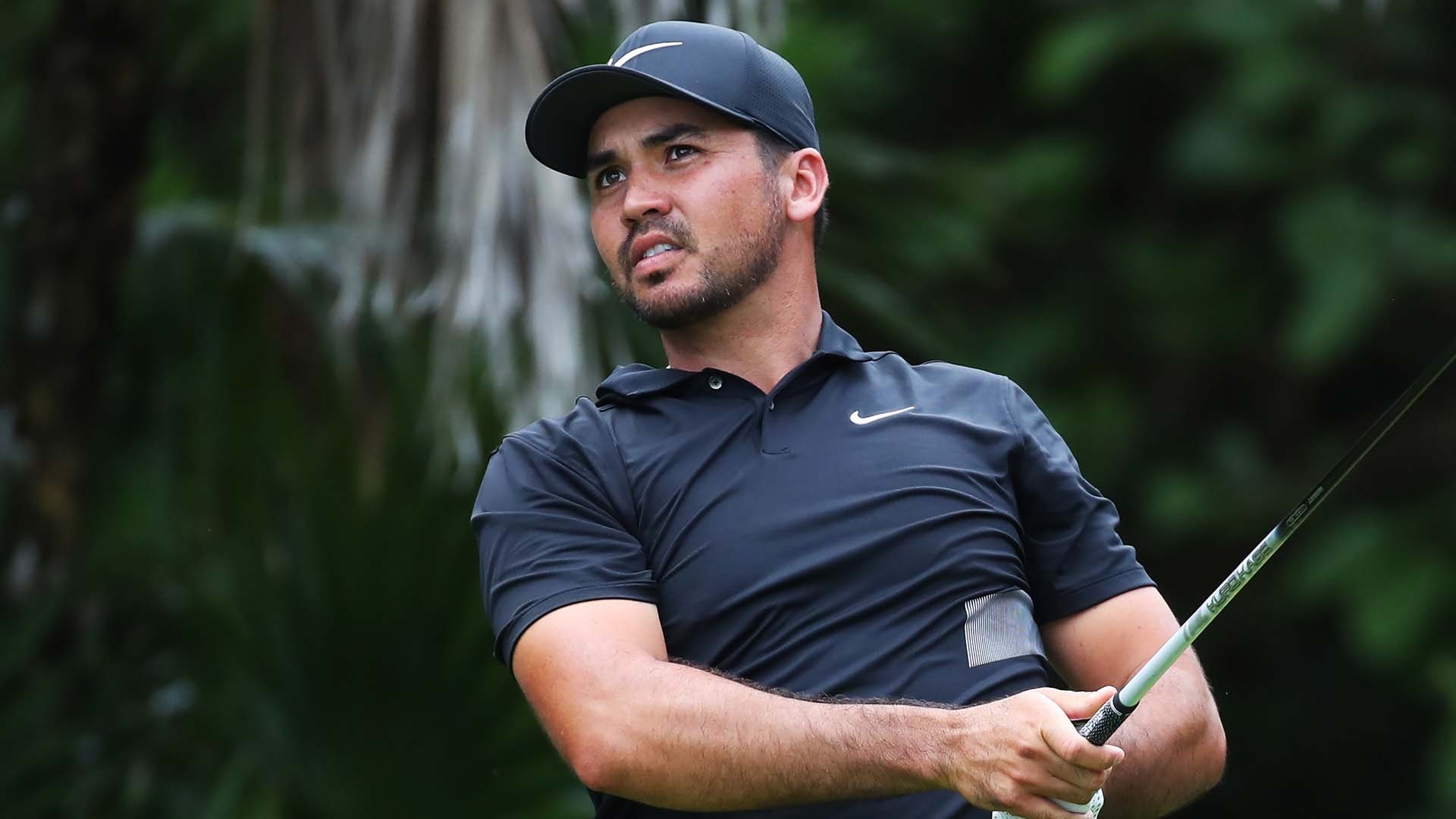 5. Jason Day has plenty of explanations for his recent slide in the world rankings.

The former world No. 1 has stated on multiple occasions his ambition to return to the top of the standings, including last week in Mexico when he offered ample reasons while speaking to reporters: too many caddies (four this year), a lack of an athletic trainer for much of the season and an uncooperative back that continues to give him trouble.

But that self-assessment didn't pay immediate dividends, as Day missed the cut in what is expected to be his final PGA Tour start before the Presidents Cup.

Day reached a level to which few can relate during his breakthrough 2015 season. But the former teen phenom turned 32 last week, and he's now down to 29th in the rankings. The climb back to No. 1 won't get any less arduous from here. 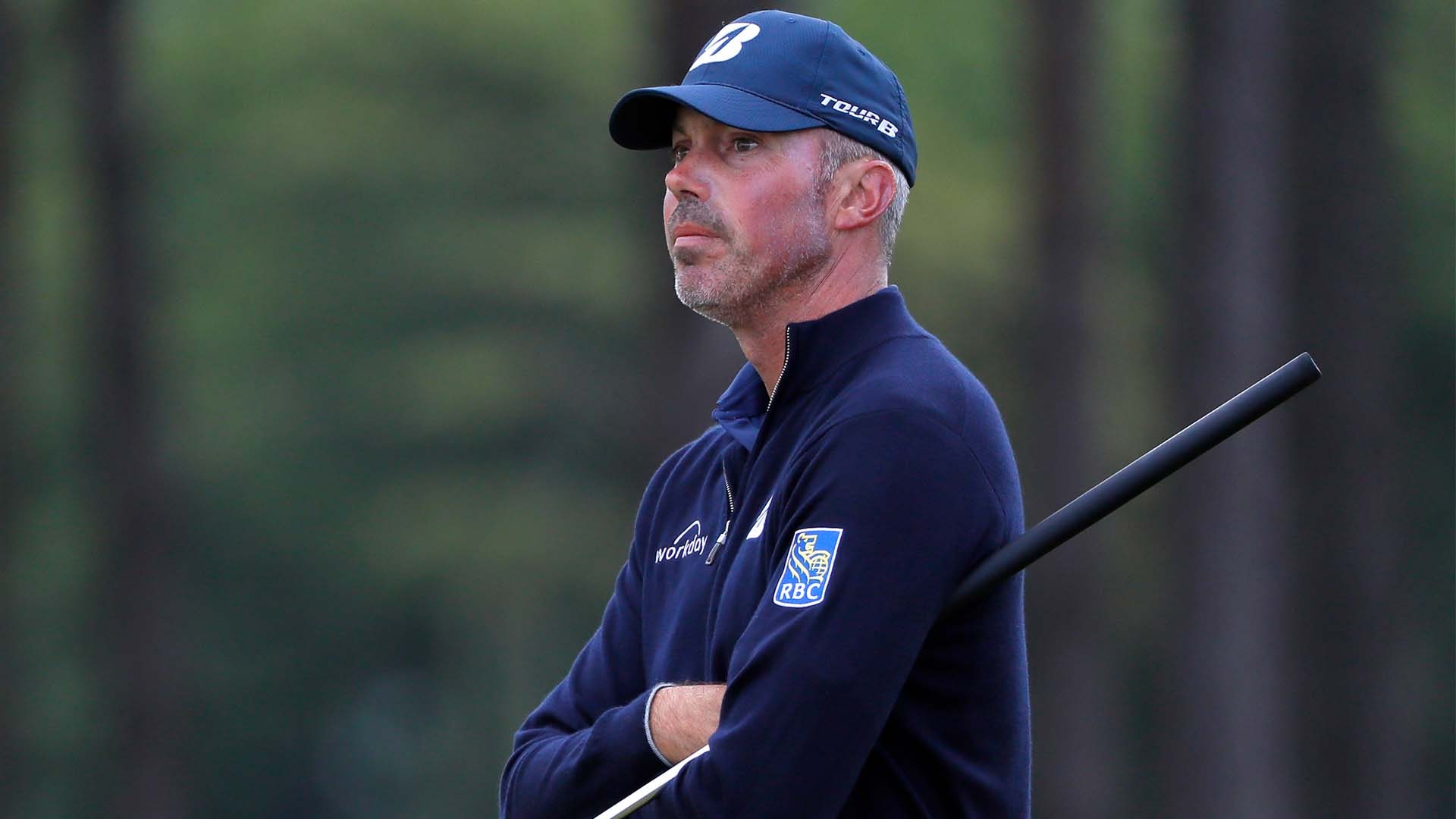 6. A contrite Matt Kuchar concluded his title defense at Mayakoba.

Kuchar made headlines for all the wrong reasons after his drought-snapping victory in Mexico, building a controversy that spilled over into the new year. Returning to Riviera Maya for the first time since, Kuchar told reporters that he had regrets over how he handled the payment situation with fill-in caddie David "El Tucan" Ortiz.

"I'm disappointed in myself," Kuchar said. "When you have moments you're not proud of, you make amends for them, you do your best to make it right and try to keep moving forward and staying positive."

While the week began in awkward fashion, it ended on a high note for Kuchar who closed with a 62 that included a final-round ace.

7. For his part, Ortiz was able to get another last-minute bag – although this job ended with far less fanfare.

The Thursday washout prompted Jason Dufner to withdraw, which put first alternate Rob Oppenheim into the field. But Oppenheim's usual caddie wasn't able to get to Mexico in time, so he asked tournament officials to put him in touch with El Tucan.

After reportedly reaching a "mutually agreed upon" compensation structure, the two joined up but didn't find a spark, as Oppenheim missed the cut following rounds of 73-71.

8. It's been 41 years since a Mexican won on the PGA Tour, but that drought will end soon.

Carlos Ortiz was the latest to make a run toward the winner's circle, finishing T-2 at Mayakoba in front of partisan fans. He's continuing to show resurgent form, while his brother, Alvaro, won the Latin American Amateur earlier this year and was in the Mayakoba mix through 54 holes.

Throw in Abraham Ancer, who finished T-8 and next month will become the first Mexican to play in the Presidents Cup, and it's clear that the crop of talent from south of the border is as strong as it's been in years. 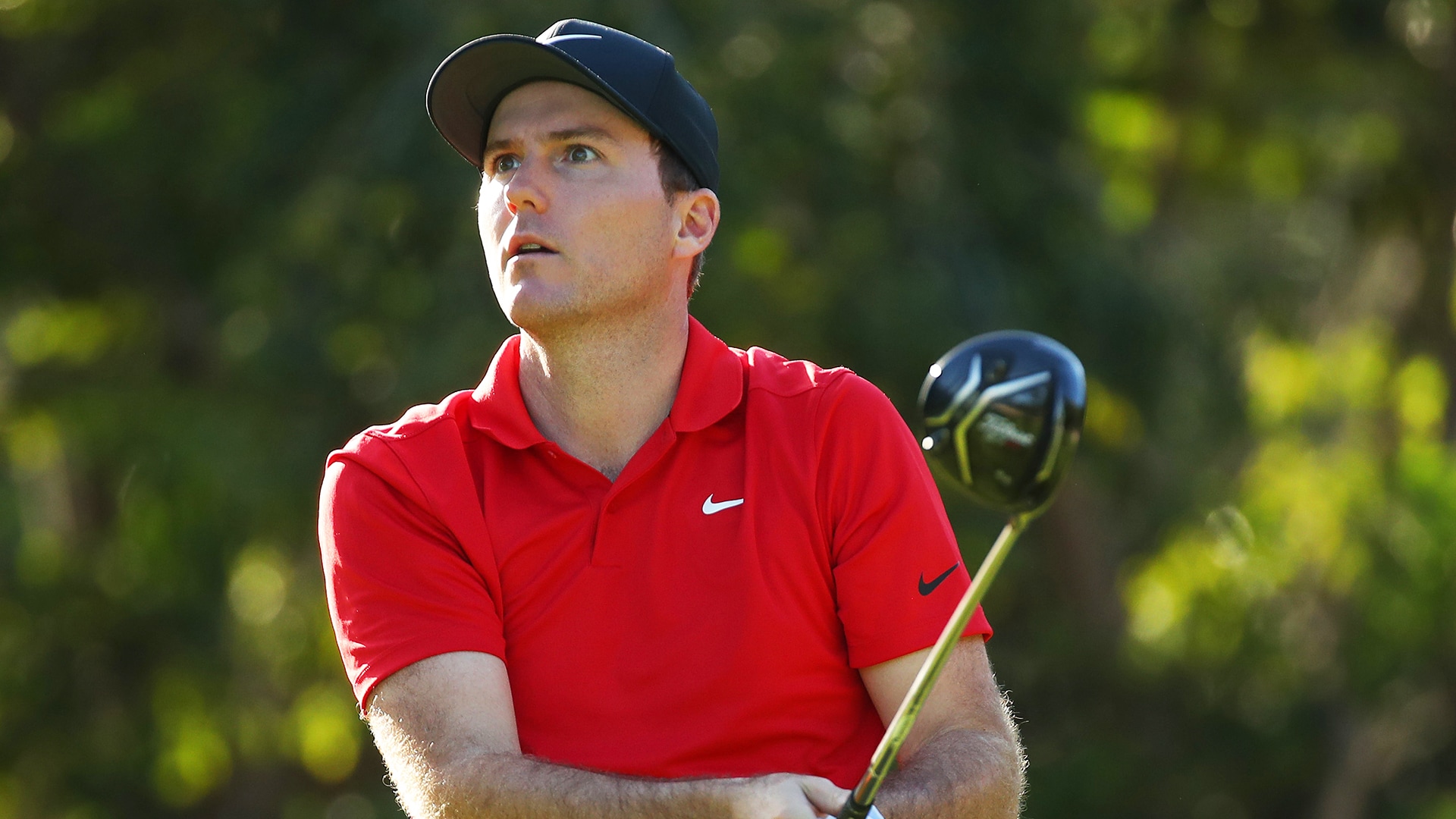 Russell Henley took the high road, and it led him straight to the parking lot.

Henley was off to a solid start through two rounds at Mayakoba, shooting 7 under to move into contention. But while he was signing autographs for fans, he noticed that one of his golf balls was slightly different from his usual equipment. The revelation led to an eight-shot penalty once Henley consulted with rules officials and revealed he had used the ball across four holes of the second round.

The penalty for violating the One Ball Rule under Rule 20.3 seemed especially harsh given the lack of intent, and it cost Henley a chance at the weekend. He was lauded for his transparency and handling of the situation, but rest assured he'll likely double check every ball in the bag when he reaches the tee next week in Sea Island. 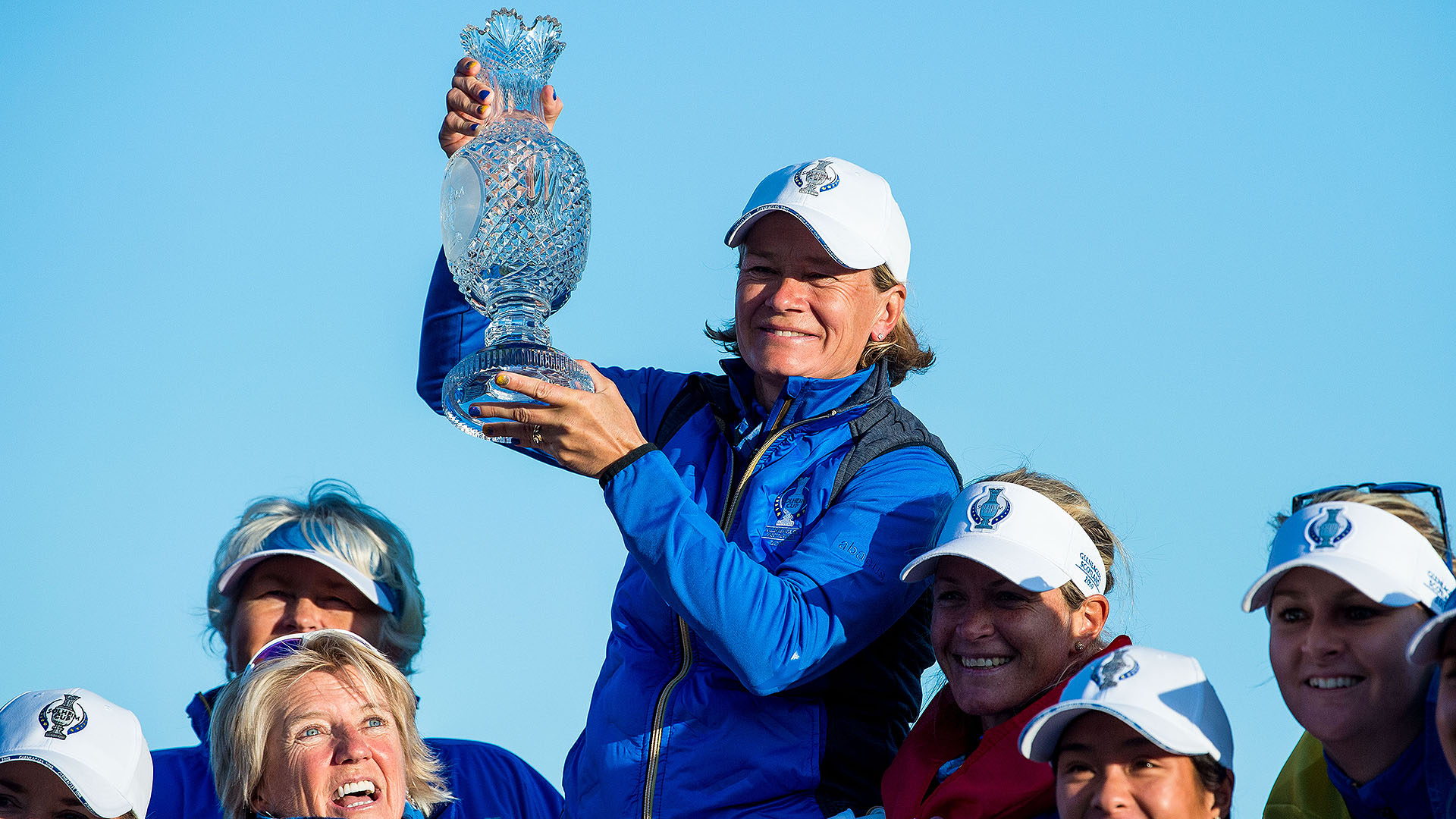 Back for Round 2: Catriona Matthew. Two months after she led a stirring European victory at the Solheim Cup, the Scot signed up to captain the squad again in 2021 at Inverness when the Euros look to win on foreign soil for just the second time. It's a no-brainer decision, as Matthew proved as capable in the captain's seat as she was when playing in the matches.

Be Careful What You Wish For: Abraham Ancer. The Presidents Cup rookie wasn't angling for headlines when he plainly stated a desire to face U.S. playing captain Tiger Woods in singles' play at Royal Melbourne, but the declaration still sparked recollections of Stephen Ames' ill-fated quest to call out Woods years ago. Tread lightly, Abe.

Teammates Once Again: Matthew Wolff and Viktor Hovland. The two stars who helped guide Oklahoma State to a national title will pair up next month at the 12-team QBE Shootout, adding some flair and intrigue to the unofficial event.

Beware the Injured Golfer: Louis Oosthuizen. The former Open champ was briefly hospitalized while battling kidney stones, but hours later he shot an opening-round 63 at the Nedbank. Perhaps he should have scheduled a return to the ER prior to the final round, where he faded from contention with a closing 75. 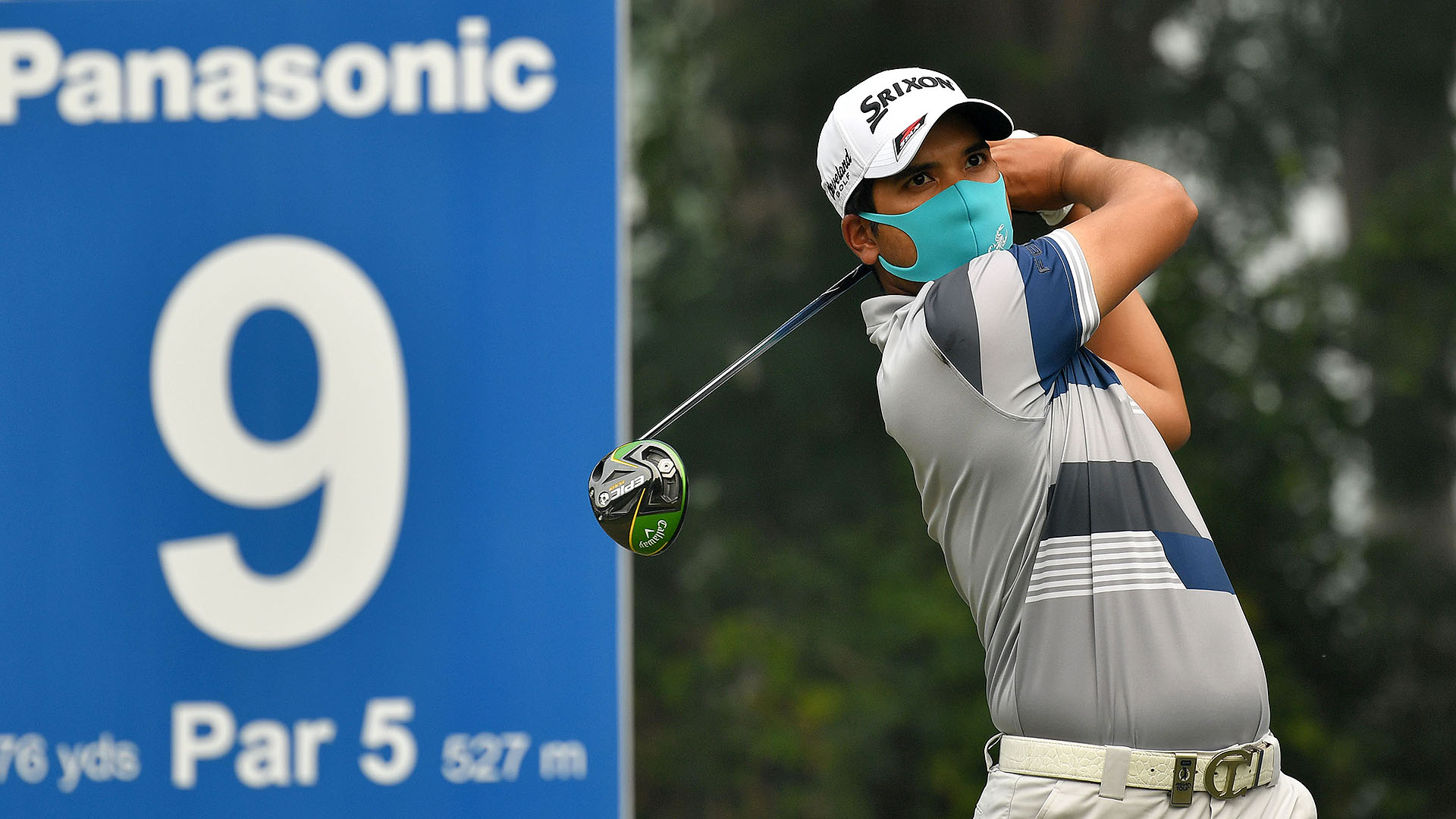 Braver Than Most: Every player who teed it up in the Panasonic Open. The Asian Tour event in the Indian capital of Delhi was initially delayed and ultimately shortened to 54 holes because of "toxic smog" that is currently blanketing the city. Several players were seen wearing anti-pollution masks during the tournament, which was eventually won by Korean teen Joohyung Kim.

Don't Leave It Short: Vaughn Taylor. With Todd in close for par on the final green at Mayakoba, Taylor surveyed a 15-footer for birdie that would have forced a playoff ... and left it center-cut but one roll short. Anything but that.

He Called Bank: Joachim Hansen, who pulled off the sort of shot that weekend hackers know well but the result that most can only dream of:

Stocking Stuffer: Jordan Spieth. He may not have gotten the call from Tiger Woods for the Presidents Cup, but Spieth did get the nod from Woods to round out the 18-man field for the Hero World Challenge (along with Henrik Stenson). It's a much-needed invite for the 2014 champ and will be some free OWGR points to end an otherwise lean year - a welcome perk for a player who has fallen from 15th to 43rd in the world over the last year. 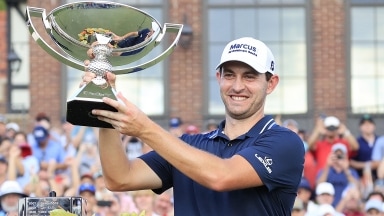 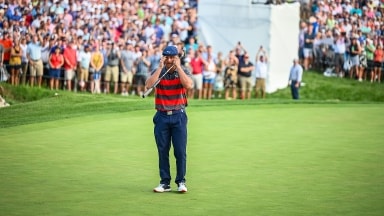 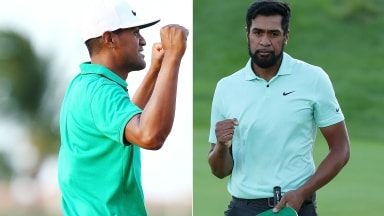