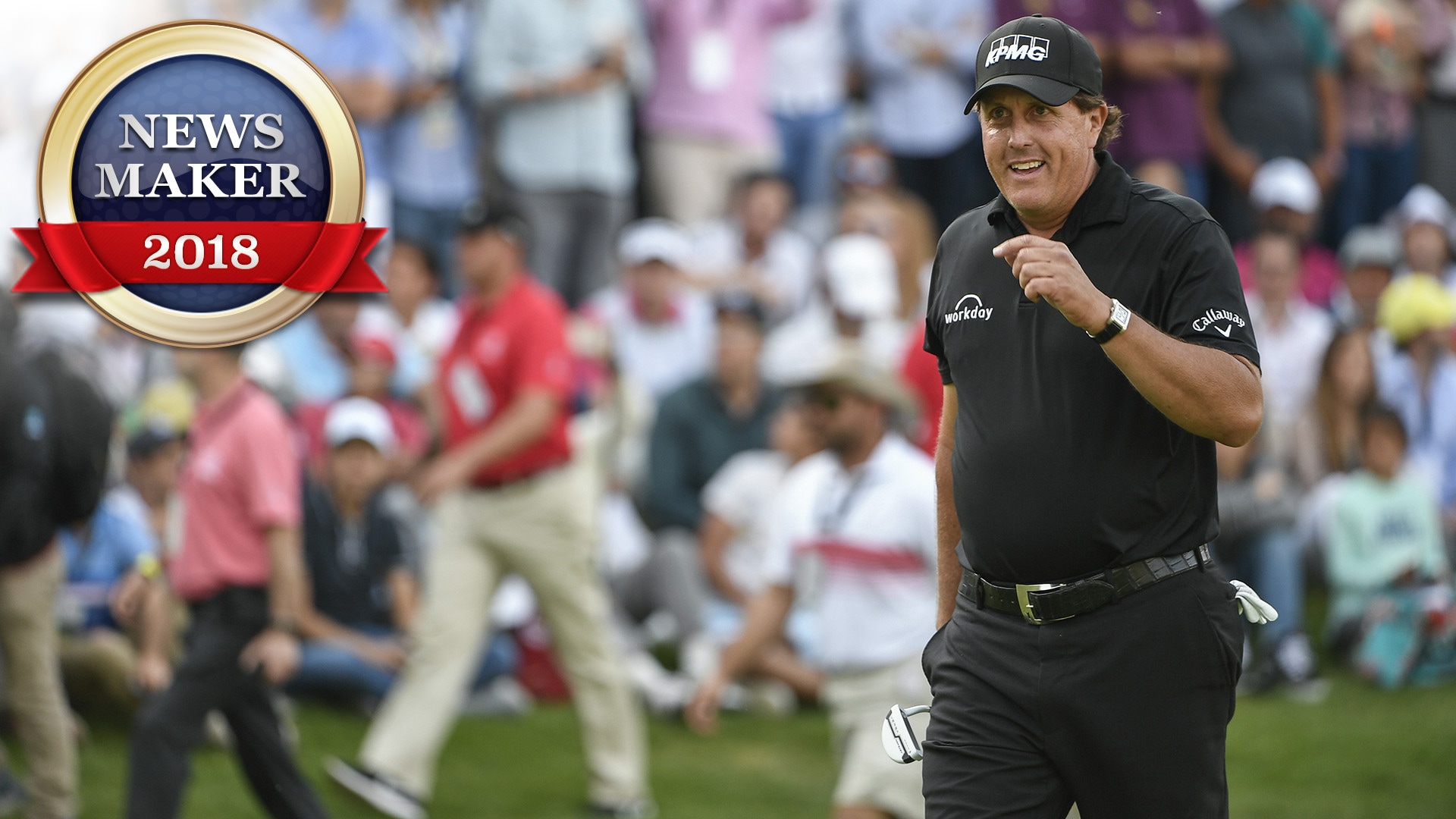 When the book on Phil Mickelson is written, a colorful tome with far more ups than downs, 2018 will require its own chapter.

How else will he be able to do justice to a stretch that saw him return to the winner’s circle, thaw relations with his one-time rival, thumb his nose at the USGA, and pioneer the advent of pay-per-view golf – all at age 48?

Lefty has dazzled before with his play, and he has a knack for charming cameras like few ever have. But never has he grabbed more headlines than he did this year, combining on-course theatrics with public relations moves outside the ropes that left the golf world perpetually wondering what he might next have up his sleeve.

First, let’s start with the good. Mickelson shed the burden of a five-year victory drought in memorable fashion, outlasting Justin Thomas in a playoff to win the WGC-Mexico Championship. The victory came at the end of a resurgent West Coast swing, one in which he finished T-6 or better three straight weeks in California, and it marked his first triumph since getting his hands on the claret jug in 2013. Questions of when his next win might come, or even if he’ll ever win again, were left south of the border.

And while Mickelson didn’t quite match that form the rest of the year, he still produced a strong season that led to a return to the Tour Championship. Erratic as ever off the tee, he sharpened his iron play and leaned on his trusty putter to finish sixth on Tour in birdie average. Not too shabby for a guy who turned pro around the time that many of today’s rising stars were born.

But there was also some bad. Mickelson wasn’t a factor at the Masters despite his early-season momentum, dashing any hopes of a fourth green jacket with his second-round 79, and he bombed out of a marquee pairing at TPC Sawgrass. As the summer stretched on and the results dried up, he continued to blame issues with energy and a lack of on-course focus. And he played some of his worst golf at one of the biggest events, going 0-2 at the Ryder Cup.

Mickelson’s only role during the second day of matches was that of good luck charm, as American players rubbed his belly for luck that never came while he sat out a full day for the first time. The next day, his singles’ loss to Francesco Molinari sparked a European celebration that might still be underway. Never one to cede any ground to Father Time, even Mickelson admitted that what was likely his last chance to taste Ryder Cup victory on foreign soil had come and gone.

Between Mexico and Paris, there was also the bizarre. Mickelson elicited a few chuckles when he showed up to his practice round at the Masters in a button-down shirt, but the laughter died down when he revealed an equity partnership in the shirt manufacturer. The long-sleeve look became a staple of his on-course wardrobe for the balance of the year, including a viral commercial where he showcased his dance moves from the worm to the high kick.

Then there was the outright unbelievable. What Mickelson did on the 13th green during the third round of the U.S. Open, chasing after his ball and slapping it across the green while it was still in motion, still doesn’t make sense six months later. For one of the game’s greats to blatantly violate the rules in such a public setting drew cries for disqualification, although they went unanswered as the USGA opted to penalize but not disqualify him and he left Shinnecock the next day without speaking to reporters. A stilted apology came days later, and things didn’t get any less complicated when he endured another rules violation in his next start at The Greenbrier.

But the USGA was nowhere to be seen last month, as Mickelson and Tiger Woods ventured into uncharted territory with The Match. Mickelson left Las Vegas $9 million richer, thanks to an overtime wedge shot off a putting green in the dark – which is absolutely a thing that actually happened. But the larger story was the rekindling of a friendship between the two best players of the last 25 years, and it’s the reason why Mickelson shares a spot alongside our No. 1 newsmaker in the countdown.

With the icy stares of their prime a thing of the past, both Mickelson and Woods came to the realization this year that they share plenty of common ground. The byproduct of that discovery was a downright chummy relationship, playing a practice round together with the world watching at Augusta National and openly needling each other from one press room to the next. It all came to a head during a lucrative pay-per-view extravaganza, one that will likely lead to more opportunities even if the execution of The Match left something to be desired.

For Mickelson, the head-to-head duel capped a year in which he was rarely if ever out of the headlines – both for good reasons and bad. Going up against players half his age, Lefty was equal parts swashbuckler, world-beater, head-scratcher and cringe-inducer.

But he was never boring. 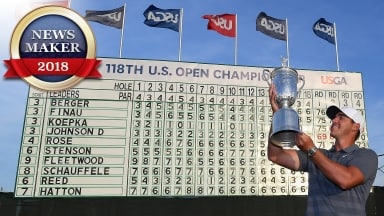 Newsmaker of the Year: No. 3, Koepka

Despite taking home half of the major hardware in 2018, Brooks Koepka only lands at No. 3.