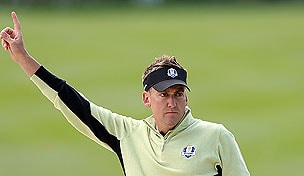 As Ian Poulter prepared to begin his 2013 season Friday at the Hyundai Tournament of Champions, another famed Englishman offered some advice on how Poulter can translate his match-play success into trophies in stroke-play events this year.

'Poults must now believe that if he gets into contention on Sunday afternoon that he will be the favorite, considering his (courage) and his putting,' said six-time major winner Nick Faldo, according to the Irish Independent.

Poulter cemented his reputation as one of the best match-play golfers of all time at last year's Ryder Cup, where his 4-0 individual record helped the Europeans win the trophy. Having amassed a 12-3 career mark in five Ryder Cup appearances, Poulter has struggled to translate that record into stroke-play success, but did capture the WGC-HSBC Champions in November for his first stroke-play victory in nearly two years.

'I think that (Medinah) would have proved to Poults that he can really do it when he's not wearing the blue and gold,' added Faldo, who himself compiled a 23-19-4 record in 11 Ryder Cup appearances.

Last year Poulter recorded top-10 finishes in three of the four majors, and his T-3 finish at Kiawah and seventh-place showing at Augusta marked his best career results at the PGA Championship and the Masters, respectively. Entering 2012, the Englishman had only three total top-10 finishes across 34 career major appearances, highlighted by his runner-up finish to Padraig Harrington at the 2008 British Open.

Faldo believes that it may not be long before Poulter's stroke-play record catches up with his established match-play credentials, which also includes a WGC-Accenture Match Play Championship victory.

'It's funny, but everyone says that match play and stroke play are radically different,' he continued. 'But if you look at history, the same players have been good at both.'