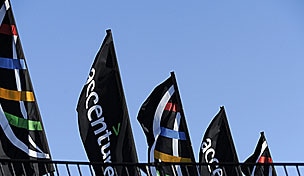 MARANA, Ariz. – The road to the Masters starts in Marana. At least for some European Tour members.

Alex Noren arrived at the Match Play Championship at No. 51 in the world, and when he says this is a big week, he has more than just this tournament on his mind.

The ultimate goal is to be in the top 50 on March 31 to get into the Masters. But there figures to be a lot of movement in the coming weeks, and Noren needs to make sure he gets as many chances as possible. This is where it gets tough on the Swede and a few other international players like him.

The top 50 in the world after the Match Play are eligible for the next World Golf Championship in two weeks at Doral. So if Noren doesn't at least get by Dustin Johnson in the opening round, the Swede won't get another chance at picking up big ranking points. He is not a PGA Tour member and thus is not in the Honda Classic.

Noren probably won't get much sympathy from American-based players, especially those who didn't qualify for the Match Play. One reason international players have an advantage for this WGC event is the timing. After the Tour season is over, Europe had big events in Shanghai, Singapore and Dubai. It began this year with strong events in places like Abu Dhabi, Qatar and Dubai.

The cutoff for the Match Play was a week after Dubai.

For the next two months in Europe, the pickings are slim when it comes to ranking points. A year ago, the strongest field in Europe from Doral through its flagship BMW PGA Championship at Europe was the Malaysian Open, which awarded 36 points to the winner. Malaysia has moved this year opposite Bay Hill, and the field is likely to suffer. Louis Oosthuizen is not going back to defend.

So it's make-or-break time for guys like Noren, Shane Lowry (68), Stephen Gallacher (56) and Marcus Fraser of Australia, who is No. 54.

And while the Match Play typically offers 74 points to the winner, keep in mind that everybody in the top 64 is at Dove Mountain (except Phil Mickelson and Brandt Snedeker), so winning a match or even two matches is not likely to make up much ground.

Still, they can't just show up. Those fields are stacked.

Fourteen of the 64 players at Dove Mountain are not in the Masters. Of that group, only one is an American – Charles Howell III, who grew up in Augusta.

THE ALTERNATE: It took Bernd Wiesberger some 18 hours to travel from his home in Austria to the high desert of Dove Mountain, a journey that might have felt a lot shorter if only his wedge would have stayed on the 18th green at Dubai.

Wiesberger, a two-time winner on the European Tour last year, was in the middle of the pack at the Dubai Desert Classic, when his wedge to the par-5 18th spun off the green and into the water – twice. Instead of par, he made a 9. Instead of getting some world ranking points, he got none. And that kept him from being ranked ahead of Shane Lowry and Fredrik Jacobson, when the field was set for the Match Play Championship.

Instead, he was the first alternate.

''Vienna to Washington was nine-and-a-half hours,'' Wiesberger said Monday night on the range at Dove Mountain. ''Three-hour layover and five hours to here. It was a chance worth taking. Otherwise, I'd be covered in snow.''

He still lives in Austria, a central base for travel, and the weather is not an issue because he's on the road so much. He came out to California in December and played in San Diego and Palm Springs just to stay sharp.

If anyone withdraws, Wiesberger will take that spot in the bracket. There doesn't appear to be any candidates to drop out.

''Even in the worst case, it's not a terrible thing to do,'' Wiesberger said of his long trip. ''It's a beautiful place. Hopefully, I'll get in and play well. Otherwise, I'll go back to Europe. I'm hitting it well right now. If I can get in, you never know.''

The stakes are high. This would be his only chance to get into Doral and keep alive his hopes of cracking the top 50 to get into the Masters.

TRAVELING ADVICE: For those who have never had to cross oceans and multiple time zones, Padraig Harrington has some advice.

Make sure you keep working. You'll catch up on sleep soon enough.

''It's harder when you go home and you don't have a time schedule to stick to,'' he said. ''One night's sleep deprivation has no effect on performance whatsoever. Two nights is extremely detrimental. So I know no matter how bad I sleep or how bad I feel, I can get through a round of golf. If it's really bad, it just means you have to maybe curtail practice and catch up on your sleep.''

Go to the gym.

He also mentioned stayed properly hydrated and eating proper foods. But his greatest piece of advice? Leave the television off.

DIVOTS: The San Francisco Chronicle reports that CordeValle Golf Club is in line to get the 2016 U.S. Women's Open. It would be the first U.S. Women's Open in California since 1982. CordeValle has hosted the Frys.com Open on the PGA Tour the last three years. ... Andrew Coltart, a two-time winner on the European Tour who played in the '99 Ryder Cup at Brookline, has been selected as Europe's coach for the Palmer Cup the next two years. The Palmer Cup is matches between American and European college players. ... Sony Open winner Russell Henley began his rookie season with nine of 10 rounds in the 60s. He has failed to break par his last four rounds. ... Jeff Maggert (1999) and Darren Clarke (2000) are the only players to beat the No. 1 seed on their way to winning the Match Play Championship. ... Dave Thomas, a four-time Ryder Cup player and renowned course designer, has been awarded Honorary Life Membership on the European Tour.

STAT OF THE WEEK: The top four players from the FedEx Cup standings on the PGA Tour are not at the Match Play Championship.

FINAL WORD: ''Stay confident, trust what it is you've been working hard to do, and never, ever, ever tell yourself you're in bad form.'' – Ian Poulter, on the key to overcoming a bad stretch of golf in match play. 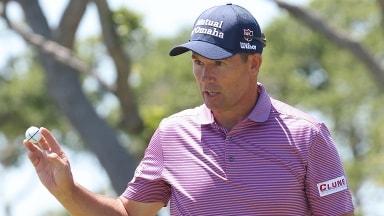