Mickelson: Got what I deserved (79) 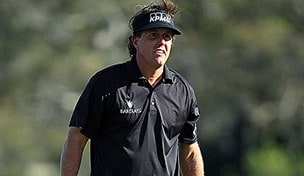 ORLANDO, Fla. – The Phil Mickelson express came to a screeching halt Friday at the Arnold Palmer Invitational, as Mickelson shot a second-round 79 and will not advance to the weekend.

Mickelson grinded to a 73 in Round 1 and said afterward that while standing over the ball he had no idea which direction it was going to go. Still, he shot the 1-over score that included six pars, four birdies, seven bogeys and an eagle.

The first three holes in the second round were uneventful for Mickelson until he four-putted from 5 feet on the par-4 13th hole (his fourth of the day).

Mickelson’s approach from 116 yards was short of the green and ended just in the fringe. He putted from there to 4 feet, 11 inches. The first “official” putt went 5 feet, 1 inch past the hole. The next went 4 feet past the hole. Ultimately, Mickelson made a putt from 3 feet, 1 inch to complete the four-putt and make triple-bogey 7.

“Well, fortunately, they didn’t count the first one out on the fringe,” Mickelson quipped. “Obviously, I played terrible, and I deserved to shoot a score like this.”

Mickelson will play the Shell Houston Open next week, then take a week off before heading to the Masters.