Mickelson: Must play like Pebble last year to catch Woods 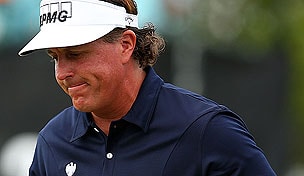 Getty Images
DUBLIN, OH - JUNE 05: Rickie Fowler watches his tee shot on the first hole during the third round of the Memorial Tournament presented by Morgan Stanley at Muirfield Village Golf Club on June 5, 2010 in Dublin, Ohio. (Photo by Scott Halleran/Getty Images)  -

DORAL, Fla. – Phil Mickelson has been Phil the Thrill this week at the WGC-Cadillac Championship.

He entered the week saying he wasn’t quite sure the state of his game, having not prepared as much as he would’ve liked. Then he went out and shot 67 in the first two rounds, including a wild birdie from off the cart path during Day 2.

Mickelson made birdie on the second hole Saturday during the third round to inch closer to Tiger Woods, but he three-putted from 4 feet on No. 3 to lose some steam. But in typical Mickelson fashion he made four more birdies on a breezy day and is five behind Woods.

Leave it to Mickelson to have that perfect quote to sum up his Sunday chances.

“I’m going to have to play a round like I played at Pebble last year,” he said. “Something in the low 60s.”

Was that a subtle nudge to Woods?

If you remember, Mickelson was paired with Woods last year in the final round of the AT&T Pebble Beach Natonal Pro-Am and shot 64, beating Woods by 11 shots. Mickelson easily won the tournament.