Mickelson moves up NTO leaderboard with 67 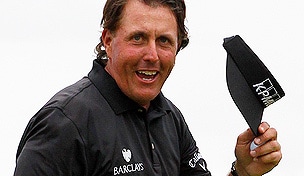 LOS ANGELES – Phil Mickelson scrapped his way back into the weekend mix at the Northern Trust Open.

With a 4-under-par 67 Friday that included a double bogey at Riviera's 10th hole, Mickelson moved up 35 spots on the leaderboard. He’s tied for 13th, five shots off the lead.

“It took a great round and just turned it into a pretty good one,” Mickelson said of his double bogey. “I just need a good round tomorrow to get right back in it Sunday.”

Mickelson opened the second round with an eagle, nearling holing an 8-iron for double eagle. He tapped in a 3-inch putt for eagle there, and he was off and running, making the turn in 3 under.

But that’s where the wicked 10th took a bite out of Mickelson’s scorecard. He pushed his tee shot left, behind a tree, where he punched up onto the shaved bank left of the green. From there, he bladed a wedge through the green and into a bunker.

Throw out the double bogey, and Mickelson was excited about the way he was striking the ball. He battled back with three birdies over the final eight holes.

“I really like the way the swing started to feel today,” Mickelson said.