Mickelson's days as legitimate U.S. Open contender are over 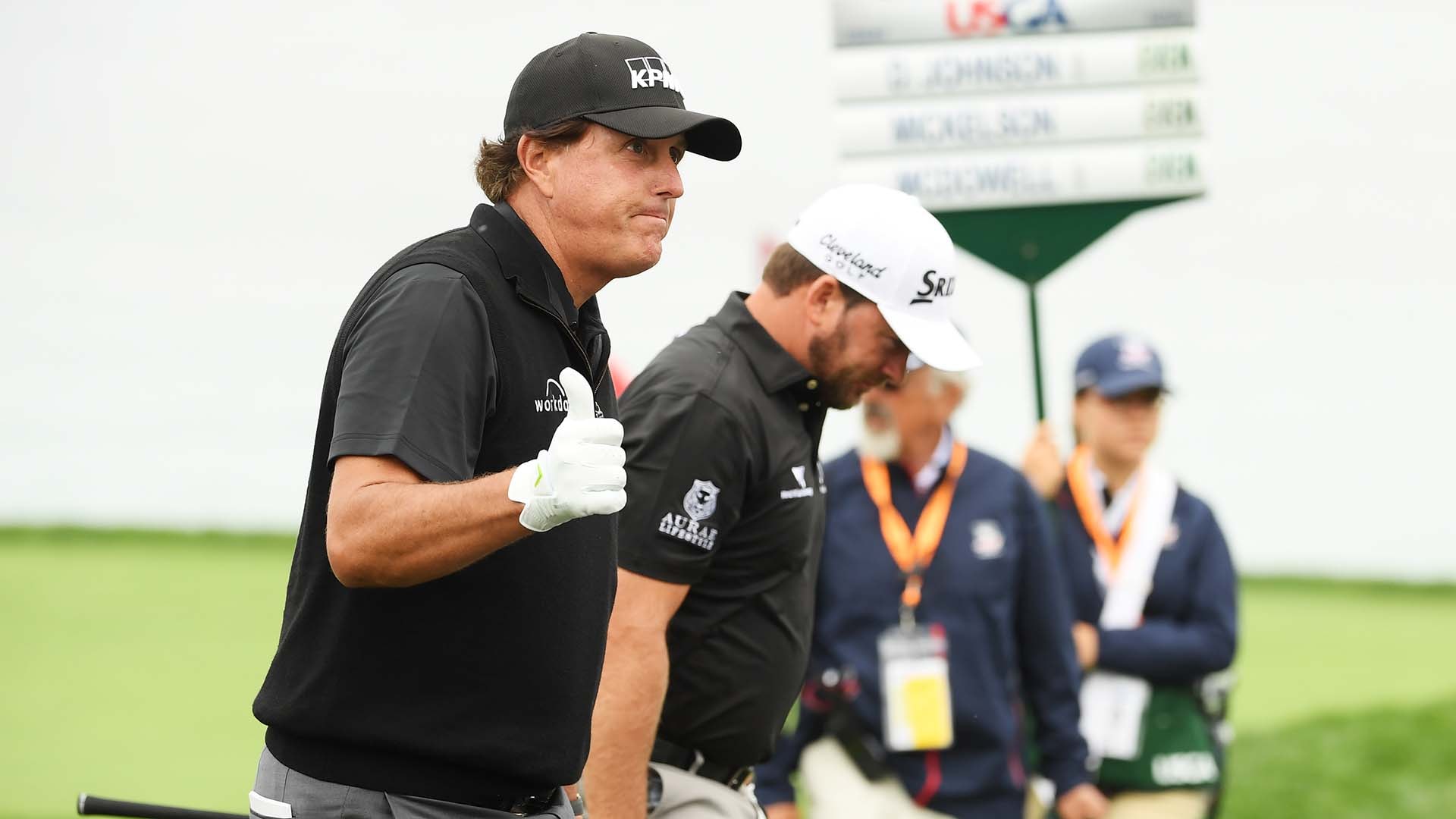 PEBBLE BEACH, Calif. – It’s not as though he could have forgotten his plight; the thousands of fans who lined the fairways at Pebble Beach made sure of that.

As Phil Mickelson made his way to the 17th green Sunday at the U.S. Open, the silence was broken, as one fan shouted, “Go get ’em old man!”

No, Lefty isn’t old, but he’s not tone deaf, either.

As Mickelson reached the green, the grandstand erupted with a chorus of "Happy Birthday."

“Let’s start with twice a hole and go from there, so 36 times is a good estimate,” said Charles Howell III, who was paired with Mickelson, when asked how many times the fans serenaded the newly-turned 49-year-old during the final round.

Mickelson flashed his signature thumbs up and boyish smile, but he had the look of a man who is done celebrating birthdays. You know, the age where whatever gift you may want you’ve already bought for yourself, the age where constant well-wishing only serves to remind you that you’re closer to the end than the beginning of your journey.

When he completed his round of 72 nearly an hour before Sunday’s front-runner Gary Woodland teed off, Mickelson dutifully ran the autograph gauntlet. That’s what Phil does, signing every scrap of paper and flag shoved in his direction.

Fans continued to offer birthday wishes as he made his way for the exit, and he graciously nodded at each one.

“I heard it a decent amount. It's pretty cool. The people here have been so nice to me and I'm very thankful,” Mickelson said.

At 49 years young, Lefty is as much a part of Pebble Beach lore as Bing Crosby. He’s won the AT&T Pebble Beach Pro-Am five times, including earlier this year. But this stark Sunday wasn’t about his success at the Clambake. This was a farewell tour, a palpable – and maybe even merciful – end to more than two decades of heartbreak and hopelessly bad luck at the U.S. Open.

Mickelson suggested as much earlier this month at the Memorial.

“When you're turning 49, you're like I've got two more chances, this year, and maybe Winged Foot, and that's about it,” he figured. “With that being the only one in the four that I haven't won, and what it would offer me and how I look at my career, I put more pressure on it. That's the difficult thing.”


Mickelson will play the 2020 U.S. Open at Winged Foot, the site of arguably his most devastating gut punch in 2006, but he won’t be a serious contender. Mickelson zealots will hold out hope. Mickelson will say all the right things. But 50-year-olds just don’t win U.S. Opens – not in this age of youthful swagger and unabashed power.

While Mickelson will cling to the notion that anything is possible because, well, that’s what competitors do, the golf god’s have no interest in cosmic make-goods. There’s simply too much mileage to make Mickelson anything more than a sentimental favorite at the U.S. Open going forward.

It’s what made Sunday’s final march around Pebble Beach something of a seminal moment, as Mickelson closed the competitive book on his checkered U.S. Open legacy. He made his first start as a professional on the seaside enclave at the 1992 U.S. Open. This year’s championship was the 20th anniversary of his first brush with U.S. Open immortality at Pinehurst in 1999. At the time, he probably thought he had an eternity to make things right at the U.S. Open.

Mickelson has still never won a U.S. Open to collect the final leg of the career Grand Slam, but he was always entertaining. In 1999, he famously carried a pager (the millennials in the crowd can Google that) and promised to walk off the course during the final round if his wife, Amy, went into labor with the couple’s first child.

In 2006, Mickelson hit a corporate tent, a tree and an awful bunker shot – all on the 72nd hole – to finish runner-up to Geoff Ogilvy. He came up short at Merion, Bethpage and Shinnecock. In his 28 starts in the U.S. Open, Mickelson has six runner-up finishes. Always a bridesmaid.

Lefty’s history with his national championship has been bittersweet with an emphasis on bitter. Along with those near-misses he’s become the unfiltered voice of a disgruntled generation when it comes to the USGA.

Last year at Shinnecock Hills, Mickelson blew past the title of critic and emerged as an iconoclast when he purposely swatted a moving ball on the green during the third round. At the time Mickelson said it was a calculated move to save shots, but many saw it as a not-so-silent protest after years of setup and rules snafus by the USGA.

Mickelson isn’t done playing the U.S. Open, but age and a simple analysis of the modern game paints a clear picture. Pebble Beach was his competitive swan song at the U.S. Open, his last – and best – chance to fill a hole in an otherwise spotless resume.

“Well, I don't know what else to say. It's not like I'm going to stop trying. I enjoy the challenge. But I thought this was a really good chance for me,” Mickelson said.

The ultimate irony is that Pebble Beach will rank among Mickelson’s best ball-striking weeks at the U.S. Open. He hit more than 60 percent of his fairways – for Phil, that is something – but was abandoned by his normally magical short game.

Mickelson’s legacy, though, won’t be defined by his inability to win the U.S. Open and complete the career Grand Slam. Arnold Palmer never completed the career slam and no one has ever questioned his place on the Mount Rushmore of golf. Lefty is still in the World Golf Hall of Fame and will forever be regarded as one of the game’s all-time popular players. He is – and will always be – the People’s Champion.

Lefty’s days as a ceremonial golfer are years away, but the gnawing reality as his fans offered their final birthday wishes on Sunday was impossible to ignore. His run as a legitimate U.S. Open contender is over, even if he would never admit as much.

Maybe this was as good as it was ever going to get for Mickelson.