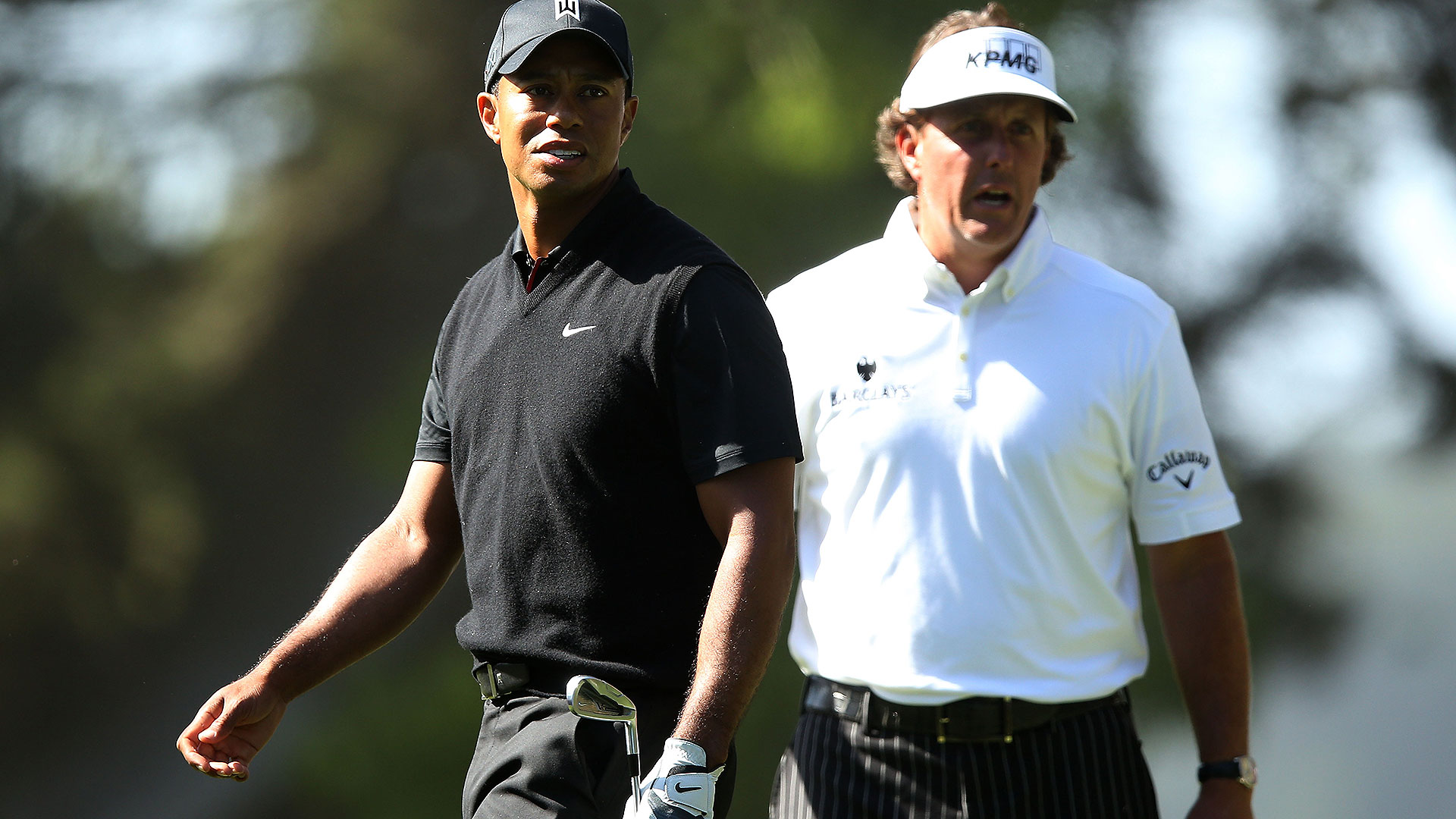 PALM HARBOR, Fla. – Three days after he finally got his hands around the trophy, the effects of Phil Mickelson’s drought-breaking victory are still being felt a country over.

Mickelson isn’t in the field at this week’s Valspar Championship, seemingly one of only a handful of stars who have stayed away from the Copperhead Course as the tournament boasts its best field to date. But that didn’t keep his name out of the news Wednesday, as one player after the next stepped up to the microphone to describe the magnitude of his playoff win over Justin Thomas.

Mickelson’s popularity is not just limited to the throng of fans that follow him at tournaments. So when he finally got back into the winner’s circle after nearly five years, the effect was two-fold: it put the young stars on notice that the Tour’s elder statesman can still hang, and it gave hope to a certain 14-time major champ that time has not yet run out.

Tiger Woods is making his tournament debut this week at Innisbrook, marking his first trip here since a co-ed team event in 1996 – when Thomas, Jon Rahm and Jordan Spieth were still toddlers. Woods and Mickelson weren’t exactly warm and fuzzy during their respective primes, but they’ve grown closer as the years have passed and Woods was watching Sunday as Mickelson won after a number of recent close calls.

“What Phil is showing us is that can still do it later on in our careers,” Woods said. “Davis (Love III) did it at 51, I believe. Phil is 47. I think Kenny Perry won a handful of events close to 45, 46. So, you know, there are a few guys that can do it late in their career.”

Woods has an entire YouTube library full of tournaments at his disposal where either he or Mickelson left with the trophy, but the perspective is a bit different for the Tour’s younger generation. When Mickelson won The Open in 2013, his most recent victory prior to Sunday, Spieth was still basking in the glow of his breakthrough victory at the John Deere Classic the prior week.

Spieth’s youth again shone through when he attempted to compare what Mickelson accomplished to Jack Nicklaus’ Masters win in 1986 at age 46 – only to admit that his perspective on the latter is based entirely on hearsay given that he wasn’t born for another seven years.

“Pretty incredible for a guy who has put family first and certainly backed off the amount of time he’s played, and definitely the amount of work on the course with everything that he has off the golf course,” Spieth said of Mickelson. “To be able to come out and compete at that level consistently, I think that speaks to as much as his win.”

That sentiment was echoed by Rory McIlroy, who eschewed last week’s event in Mexico City for some practice time at Augusta National but still took note of the three-time jacket winner’s latest triumph.

“Good to see Phil win last week. He’s been trending in the right direction,” McIlroy said. “I said yesterday I don’t know why more people aren’t talking about him going into this stage of the season, because it seemed like he was flying under the radar a little bit. He was top 5-ing just for fun.”

McIlroy and Spieth have had plenty of time to watch Mickelson rekindle his game over the recent months, cobbling together top finishes and standout performances in team events before all the pieces fell into place in Mexico. But the player who can perhaps derive the most inspiration from Mickelson’s performance is the one who spent much of Lefty’s winless drought on the disabled list.

Indeed, there was a glint in Woods’ eye as he recounted Mickelson’s performance down the stretch in great detail, a clear indicator that he was tuned in for the tournament’s conclusion where the savvy veteran outlasted the rising star.

“It was a very, very small margin, and what he did on Sunday was very, very cool to watch,” Woods said. “He did it. He put the pressure on Justin in the playoff, put it right there pin-high and hit a beautiful putt. I don’t know how it didn’t go in.”

Woods and Mickelson have carved divergent paths to greatness, intersecting on fewer occasions than their decorated records might suggest. But as they approach the twilight of their careers, gently bridging the gap between Ryder Cup players and potential future captaincies, they have begun to focus more on their similarities than differences.

And while the road to recovery facing Woods remains arduous, watching a longtime peer still more than five years his senior keep the latest crop of young stars at bay for a week could very well have offered a much-needed glimmer of hope at just the right time.

“Seeing Phil win I think was really cool for Tiger to recognize, ‘OK, I’ve got all this time to be able to still get to that high level,’” Spieth said. “I haven’t talked to him about that, but I imagine that’s got to be pretty interesting for him to see, and it helps put things in perspective in how much time he still really does have for the top level. And knowing the nature he’s displayed over the last 20 years, it still wouldn’t be surprising if come Masters time he’s in the hunt on Sunday. That’s pretty amazing to say.”