Player-caddie relationship has its perks, drawbacks 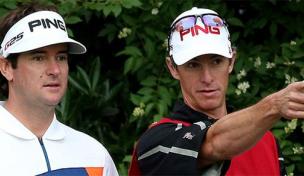 BETHESDA, Md. – Show up, keep up and shut up. We’ve all heard those words before – they’re sort of the official unofficial motto of caddies, one which every looper from Eddie Lowery to Danny Noonan to Steve Williams has understood since the first time a strap touched their right shoulders.

That motto may make for a nice sign to hang in the caddyshack, but it doesn’t ring true anymore – at least the last part. These days, caddies on the professional circuit are instead expected to speak up, calling out yardages, gauging wind conditions and suggesting clubs for their players.

On Sunday, Ted Scott did just that. With his longtime loop Bubba Watson leading the Travelers Championship with three holes to play, Scott suggested a 9-iron over the 8-iron at the par-3 16th hole, and his player promptly deposited it in the water hazard guarding the front portion of the green.

What happened next, in a few prolific bursts, was YouTube gold. Watson berated Scott for his suggestion, then again after his shot from the drop zone flew the green. It was hardly the first instance of a player castigating his caddie in public, but the television cameras and microphones ensured the world would know about this one.

In the ensuing minutes and hours, Twitter timelines exploded with disgust for Watson’s audible outburst. After taking full blame, Scott found some humor in the situation, later tweeting, “Not sure what @bubbawatson was talking about. I never make a mistak.” Leave off the last “e” for epic.

Was public sentiment correct in instantly chastising Watson for his treatment of Scott? Or did we just have the curtain pulled back on the unseemly part of the player-caddie relationship?

In order to answer these questions, it helps to first understand this dynamic.

“Oh, yeah. It’s weird,” Brett Waldman, currently on the bag of Sean O’Hair, said of the player-caddie dynamic. “It’s definitely weird that I spend more time with my boss than my wife.”

The old joke around pro golf is that many player-caddie relationships are more stable than marriages, though some can be equally volatile. Think about it: Caddies are both employees and partners; they work for their players, but also with them.

“The dynamics are very interesting,” explained Scott Vail, who for the last seven years has caddied for Brandt Snedeker. “You have to separate between boss and employee and friend. In my case, Brandt is a friend, too. We have respect for each other. When it’s time to go to work, we don’t put our friendship aside, but it’s just a different dynamic in our relationship on the golf course.”

The job extends past simply finding yardages and pulling clubs. As many observers witnessed in the case of Watson and Scott, caddying can also include the role of punching bag – at least figuratively.

“Sometimes when a player messes up, he would rather think it wasn’t his fault, so as to keep his confidence level maybe higher than it would have been,” said Bob Estes, who has worked with his caddie, Chuck Mohr, since 2001. “Just like if you miss a putt, you might prefer to blame it on a misread rather than it being a poor putt. I don’t like to play mind games like that, but some guys do.”

“If I needed advice from my caddie, he'd be hitting the shots and I'd be carrying the bag.” – Bobby Jones

“Nobody but you and your caddie care what you do out there – and if your caddie is betting against you, he doesn't care, either.” – Lee Trevino

“The only time I talk on the golf course is to my caddie. And then only to complain when he gives me the wrong club. – Seve Ballesteros

Caddie culture may have advanced to the point where it’s a career and not just a job, but treatment toward caddies doesn’t always show similar progress.

“You hear some of the caddies talking about certain players who are much tougher on their caddies than other players might be,” Estes explained. “I’m sure there have been many instances where a player has chewed out his caddie, whether it was deserved or not. Sometimes it could be over a bad yardage or forgetting the umbrella or leaving a club on the driving range – something like that. There are reasons that the employer will chew out his employee, but hopefully it’s always in private and not in front of other people. That’s a situation where you kind of need to take him off to the side and talk.”

“Some guys belittle their caddie, they just do it in private,” one caddie said on the condition of anonymity. “I’ve worked for two different blamers. I guarantee 20-30 percent of the guys just cream their caddies – and only some of those guys apologize after the round is over. And a lot of ‘em are good friends. I had a buddy ream me so badly. After the round was over, we had a three-hour drive. I chewed him out the entire time for being such a jackass to me.”

Using that analogy to marriage again, there are times when irreconcilable differences can lead to the dissolution of the relationship.

“When it comes to the end of a relationship, you can see,” said Mick Doran, who has caddied for Lee Westwood, Justin Rose and Darren Clarke during a 25-year career and now works for Brendan Steele. “The player is always on him. I’ve worked for some good players. It might look easy on TV, but it’s not. They talk quietly to you. When it starts getting to the abusive part, you know it’s time to move on.”

So, you want to talk hypocritical?

Golfer: “You’ve got to be the worst caddie in the world.”

Caddie: “I don’t think so. That would be too much of a coincidence.”

Golfer: “Please stop checking your watch all the time. It’s too much of a distraction.”

Golfer: “I’d move heaven and earth to break 100 on this course.”

Caddie: “Try heaven, you’ve already moved most of the earth.”

“There have been plenty of caddies just drop the bag,” said the aforementioned anonymous caddie. “I’ve twice seen it myself mid-round. I mean, you’re just an employee and if a guy treats you like that, you can just take off.

“The first tournament I ever caddied was at Westchester Country Club. We had a late tee time, so I went out early to how the course was playing. Well, I’m out on 15, just to the right of the green, watching shots and putts.

“Here comes this player and his caddie – I won’t say who it was – and I hear the caddie yell, ‘I’m trying my best!’ The player says something back and the caddie slams down the bag, pulls off his vest and starts screaming at the fans. ‘Who wants this job? You want it? You want it?’ He points at me; he has no idea who I am. I’m like, ‘Um, I already have a job.’

“So he starts climbing this hill just off the 15th green. He goes about 20 yards and then turns around. I figure he must have come to his senses. Nope. He gets back down to the bag, takes his wallet out and walks back up the hill.

“A lot of people on the outside feel like we’re just part of the background,” Doran contested. “But we’re not. We’re doing a lot. If you can save them a shot each week, that’s a lot. But you do sometimes mess up.”

When these circumstances happen – and yes, they will happen – every caddie appreciates when his player follows such a mistake by claiming “we” messed up, rather than pointing a finger at the guy carrying his clubs.

“You have to remember,” Estes said, “it’s an employer-employee relationship, but at the same time you’re teammates.”

Ask a veteran caddie and he’ll claim that the usual stuff associated with caddying is hardly the most difficult part of the gig.

“The psychological part of my job is easily the most important part of my job,” explained Kip Henley, who has caddied for Brian Gay for the past seven years. “Saying the right thing at the right time and knowing when to shut up and get out of the way. The psychology of caddying is way ahead of yardages and reading greens – no doubt about it.”

All of this information leads us back to the Watson-Scott situation from this past Sunday.

Chris Stroud was Watson’s playing partner in the final twosome of the day, giving the eventual runner-up a front row seat at what occurred on the 16th hole.

“For him to hit that one shot poorly and then just go off like that was very surprising,” said Stroud. “For being that close, he could have easily have made a bogey there or at least a double and still been OK. My caddie [John Limanti] and I were talking about it the whole way up to the green while he was in the drop circle. He just talked himself out of the tournament.

“I think more than anything he'll learn from that. I think the next time he's in that situation, I think he'll draw and say, ‘You know what, I'm not going to do that again. I'm going to choose to be positive with myself and just be persistent and just do the best I can.’

“For Bubba to do that was a little bit of a surprise. I'm sure he'll learn from it.”

With everything we’ve come to know not just about that specific situation on Sunday, but the dynamic between players and caddies, let’s review those earlier questions.

Was public sentiment correct in instantly chastising Watson for his treatment of Scott? Or did we just have the curtain pulled back on the unseemly part of the player-caddie relationship?

The correct answer may be yes in both instances.

Behind closed doors, among whispers down the range this week, Watson is being called out for his boorish behavior. There are players and caddies alike who seemed to enjoy seeing a “blamer” as they call that type exposed in a public forum.

Then again, there’s something to be said about being teammates, too. Scott has looped for Watson for years, at one time before his Masters win giving an ultimatum that if the player’s attitude didn’t improve, he would walk away from the job.

With that in mind, Watson wasn’t just berating an employee on 16; he berating a friend and partner. Some have contended that if he wasn’t so secure in their relationship, he wouldn’t have felt so comfortable reprimanding him in public.

What we do know is that it’s something that has happened many times before and will happen many times again – even if it isn’t always televised.

After all, as Scott knows so well, everybody makes mistaks.