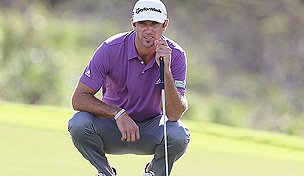 This week, fantasy golf players return to only having one event to worry about after a stretch of two-event weeks. The PGA Tour heads back to California, this time to the Monterey Peninsula, for the AT&T Pebble Beach National Pro-Am, staged across some of the country's most picturesque golf courses.

Fresh off his win last week in Phoenix, Phil Mickelson returns to defend the title he won last year with a sizzling 64 on Sunday. Here are 10 names to keep an eye on this week along the California coast:

1. Dustin Johnson: Tough not to list the defending champ on top, but DJ just barely edges him out. Twice a winner here, and outside the top-7 only once in five appearances - not to mention the near-miss at the 2010 U.S. Open at Pebble. He has won more money at this event than any other during his short career.

2. Phil Mickelson: On the heels of a dominating performance in Phoenix, Lefty now heads to Pebble in search of his fifth victory at this event. If his driver remains as dependable as it was last week, he just might get it.

3. Brandt Snedeker: Mr. Silver Medal will remain near the top of the rankings until proven otherwise. Three top-3 showings in four starts this year, and the putter appears to have gotten even hotter since last fall - no small feat, considering his prowess on the greens entering 2013.

4. Hunter Mahan: Beginning to show signs of the player that dominated the early portion of the 2012 schedule. Mahan has finished T-15 and T-16 each of the last two weeks, and now returns to Pebble where he was runner-up in 2011 and finished T-15 last year.

5. Aaron Baddeley: Willing to overlook a poor weekend in Phoenix and focus on a great one the week prior, where his 68-69 at Torrey Pines was best in the field. The Aussie has also been inside the top six at Pebble each of the past two years.

6. Jimmy Walker: Has made the cut in each of his first four starts in 2013, highlighted by a T-4 finish at Torrey Pines. He's also tied for ninth in this event each of the last two years.

7. Nick Watney: After a mediocre week in Phoenix, local product Watney will look to regain the form that helped him finish T-2 at Torrey Pines. He'll have the crowds behind him, as a high finish at Pebble may help erase the pain from his 49ers' loss Sunday.

8. Tim Clark: Hasn't played here since 2010, but that resulted in a T-10 finish - one of three top 10s the South African has in six career Pebble starts. Struggled a bit since a runner-up in Hawaii, but may find his form again this week along the Pacific coastline.

9. Bob Estes: Quietly rallied with a Sunday 63 at Humana for a T-16 finish in his season debut, and has been inside the top 16 in each of three starts at Pebble since 2009, including a T-4 result four years ago.

10. Padraig Harrington: Began his 2013 season with a solid T-9 finish last week in Phoenix, and the Irishman has been inside the top 16 at Pebble three times since 2008, including a T-7 showing a year ago.

11. Vijay Singh: Rolling 11 deep this week, because if the ultimate wild card decides to tee it up, you have to include him. A winner here in 2004 to go along with three other runner-up finishes...but how much of that success must we now attribute to antler derivatives?