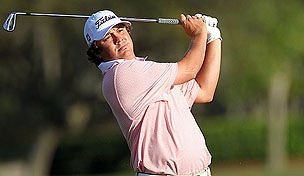 Getty Images
PALM HARBOR, FL - MARCH 20: Jim Furyk plays a shot on the 9th hole during the second round of the Transitions Championship at the Innisbrook Resort and Golf Club on March 20, 2009 in Palm Harbor, Florida. (Photo by Sam Greenwood/Getty Images)  -

The season's final major is upon us as the focus of the golf world turns to the shores of Kiawah Island. Keegan Bradley returns as defending champion, fresh off his comeback victory at Firestone, but this week he will have to battle one of the strongest fields in golf - not to mention one of the toughest, most unpredictable golf courses in the country.

Be sure to join the Golf Channel Fantasy Challenge to test yourself against our panel of experts, including defending champion Win McMurry.

Here are 10 players to watch:

1. Jason Dufner: Four top-10 finishes in his last five starts dating back to May. A solid ball-striker, Dufner (ironically) trails only Keegan Bradley in the all-around ranking. A triumph this week would be the ultimate redemption for his playoff loss last year in Atlanta.

2. Tiger Woods: Woods has carded back-to-back top-10 finishes for the first time since September 2009, and he leads the Tour in scoring average. If he's on his game he can't be beaten, but will he be able to control his ball flight on a course long enough to force a driver into his hands?

3. Matt Kuchar: A symbol of consistency, no one has more top-10s on Tour this year than Kuchar (eight). He's finished T-10 and T-19 each of the last two years in this event, and seemed to do pretty well the last time he teed it up on a Pete Dye design in Ponte Vedra Beach this past May.

4. Graeme McDowell: McDowell has been in the final group on Sunday at each of the last two majors, but left both empty-handed. His solid ball flight will be a great asset when battling windy conditions, and the Northern Irishman might just get another bite at the apple this week.

5. Lee Westwood: Perennially one of the best players from tee to green, Westwood may embrace the papsalum grass on the greens that removes the grain factor and likely keeps their speed down. With two top-8 finishes in this event since 2009, is it finally his time to triumph?

6. Rory McIlroy: Seemed to regain some momentum this past week, closing 67-68 to finish T-5 in Akron. When he's playing well, few in the field can hit the ball as solidly as the Ulsterman.

8. Bo Van Pelt: Along with Matt Kuchar, leads the Tour with eight top-10 finishes this year and has been remarkably consistent all season. Went toe-to-toe with Tiger at Congressional, and his 69.64 Sunday stroke average this year shows he can play well when the pressure is dialed up.

9. John Senden: Gained a bit of recognition with a T-10 finish at Olympic but still remains largely under the radar. A solid player tee-to-green, Senden ranks fifth on Tour in ball-striking and was on the first page of the leaderboard for most of last year's PGA in Atlanta.

10. Dustin Johnson: Definitely has the length off the tee to contend, and will likely embrace this week's 'no bunkers' rule. DJ needs a high finish this week for any shot at an automatic berth to the U.S. Ryder Cup team, and perhaps will draw on his past success at another seaside course - Pebble Beach - for inspiration.