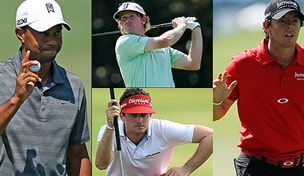 Tiger Woods won the PGA Tour Player of the Year award 10 times in a 13-year span, but has not done so in the last three years. Will he regain the Jack Nicklaus Trophy in 2013? Will Rory McIlroy repeat? In this Punch Shot, GolfChannel.com writers pick their '13 Player of the Year.

Well, I think this year we'll see a minor step back for Rory McIlroy, last year's POY. Phil Mickelson's chance of ever winning the award seems a bit of a longshot now. Same for Ernie Els. I'm bullish on Keegan Bradley and Dustin Johnson, but it's not over-the-moon optimism.

So, who does that leave? Just some guy named Tiger Woods.

The days of Woods' name being the only one needed on the ballot may be over; I don't think we'll see him claim another eight- or nine-win season. But if we can lower the bar just a bit, he may clear it again.

What does that mean, exactly? Well, a more realistic goal for him would be something similar to McIlroy's performance last season. In the days before Tiger's dominance, four wins including a major was good enough to take the award. It appears those days are here once again.

Woods is adjusting nicely to swing changes that he's undergone with instructor Sean Foley in recent years and he maintains that his physical health has never been better. Those should be scary propositions for other players hoping to win the award.

It may not be a landslide vote. His name may not be the only one needed on the ballot. But when the year is over and his peers vote, Woods will once again find his name on this title.

Unless he decides to embark on a mixed-doubles tennis career with better-half Caroline Wozniacki or struggles with his new bag of Nike Golf equipment, the preseason 2013 Player of the Year nod goes Rory McIlroy.

In fact, given the 23-year-old’s record over the past 24 months there isn’t anything to suggest he will not continue to perform at a world-beater level. Check the scorecard, since last year’s British Open he has just two finishes outside the top 10 around the globe, four victories and a nearly perfect Ryder Cup.

Tiger Woods’ new swing and improved health would make him the most-likely candidate to wrest the award away from the Ulsterman, but even the former alpha male has been unable to find an answer for McIlroy in recent years.

By most accounts McIlroy may be better prepared for 2013, committing to a more streamlined schedule this season and his fulltime move to South Florida.

The only question mark seems to be his impending move to Nike Golf, which will likely be officially announced later this month in Abu Dhabi. But even that dramatic change will be mitigated by the fact that he’s had over a month to acclimate to his new implements (his last start was Nov. 25 in Dubai).

It all makes McIlroy the proverbial leader in the clubhouse for the 2013 POY.

With a long putter pressed against his non-existent belly, Keegan Bradley will ascend to new heights in 2013 and, if we’re lucky, rankle the governing bodies along the way.

No, Bradley won’t become the Tour’s Player of the Year in 2013 simply because he’s vindictive and seeks to torment the U.S. Golf Association and R&A for banning the anchoring stroke. But it’d be foolish to suggest he doesn’t have added motivation.

In November, when the proposed ban on anchoring was announced, a fan suggested to Bradley on Twitter that he send in his application to Burger King for 2016. (In other words, the moron was saying, You’re nothing without the belly putter.) Bradley himself even thinks that the USGA has “really put an X on our back and really shined a light on us.” Well, if the Ryder Cup was any indication, he isn’t one to back down from a challenge.

His rise to golf’s elite, however, will be fueled more by his stellar all-around game than any animosity. Consider that two years ago this week, Bradley was ranked 328th in the world. Now, the 26-year-old has won three times on Tour – including the 2011 PGA, where he became the first player to win a major with a belly putter – earned nearly $8 million and sits just outside the OWGR top 10 (currently 13th), with his best season forthcoming. Sorry, golf purists.

While it’s difficult to imagine he will ever be as dominant as he was in his prime, Woods still might be the best player in the game. If it wasn’t for Rory McIlroy, there wouldn’t be any “might” as a qualifier in that assertion. If it wasn’t for McIlroy, Woods probably would have been PGA Tour player of the year last season. McIlroy might be even better this year, but so will Woods.

With three PGA Tour titles in 2012, Woods served notice he still knows how to win. Those titles helped him climb back as high as No. 2 in the world rankings. His driver came around last year, his swing was better, and though his putting stroke is less dependable, he will still make enough big putts to win big events. That includes majors.