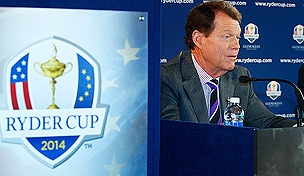 U.S. Ryder Cup captain Tom Watson has decided to trim his wild-card picks from four to three for the 2014 competition at Gleneagles in Scotland. We asked our GolfChannel.com writers if the change is a good or bad move for the U.S. squad, or if it doesn't matter.

At best, Tom Watson’s decision to have three captain’s picks for next year’s Ryder Cup, instead of four, has a shotgun solution feel, a move to do anything to stop the American side’s slide into irrelevance. At worst, it feels like change for the sake of change.

Either way, Captain America’s adjustment to the selection process will have little, if any, impact on the 2014 matches in Scotland. That may sound defeatist, but consider the facts.

If that doesn’t exactly sound like a winning formula consider that before Azinger’s handiwork the U.S. was on a 1-for-6 losing streak and had dropped consecutive matches in ’06 and ’04 by a combined 18 points. By any measure, the practice of picking four players over two was progress.

Which brings us to the real question: Why change?

If Watson wants players who are on form heading into next year’s bout then pick Nos. 1 through 9 off the points list. Or Nos. 1 through 12, for that matter, but limiting your options by giving up a potential pick defies logic.

The U.S. must do something to wrest the red, white and blue off the schneid, but changing the number of picks available to Watson feels more like window dressing.

It's too narrow of a viewpoint to claim that Tom Watson's reduction from four captain's picks to three doesn't matter.

Just last year, Hunter Mahan would have made the team as the ninth automatic qualifier. This would've altered the dynamic of the roster, as one of the four picks wouldn't have been there.

How would this have changed the result? That's obviously a hypothetical question which can't be answered. Maybe Mahan would have caught fire and been the key to a U.S. victory; maybe he would have performed worse than whomever he replaced on the team. We don't know.

And that's why we can't say for certain today whether Watson's decision was a good one or a bad one. It will matter if it results in a player making the team who otherwise wouldn't have been picked. But we'll have to wait another year-and-a-half to find out if it was a beneficial move.

Here is Tom Watson, on March 15, 2013, just five days ago, on the overriding theme for how he would comprise his U.S. Ryder Cup team: “Are (players) on the upswing or downswing?”

Am I missing something here? If you want the hottest players on your team, don’t you prefer more picks, not fewer?

Last year, Hunter Mahan, a two-time winner earlier in the season, struggled with his game for months, slipped from first to ninth and didn’t make the team on points. Didn’t get picked by the captain, either.

Under Watson’s format, he would have made the team. No offense to Mahan, but he hadn’t finished in the top 10 since April. That’s a player on the “downswing,” to use Watson’s word.

In the Ryder Cup, the more captain’s selections, the better – especially if you want to identify players on the “upswing.”

Tom Watson’s instincts have won a lot of major events over the years, but this Ryder Cup change feels like a tee shot into the rough.

Maybe it ends up being a good lie, but we won’t know until we see the lie, until we see who is the No. 9 automatic qualifier. It feels like a shot in the rough only because Watson stated his aim is getting players who are in good form going to the Ryder Cup. If Watson’s plan was in effect last year, Hunter Mahan would have made the team. While that ultimately might have worked well for captain Davis Love III, Mahan was not in good form in the few months leading up to the Ryder Cup. Four captain’s picks allows more leeway in picking a hot player who isn't an automatic qualifier.

Much like a football coach trimming his staff of assistants after a couple losing seasons, Tom Watson’s decision to move from four captain’s picks to three seems like change simply for the sake of change, and ultimately it doesn't matter that much.

While this decision will certainly bolster the cause of armchair quarterbacks speculating about how last year’s event might have been different with Hunter Mahan in the mix, at the end of the day, the matches will not be won or lost when Watson names the team’s final members. Whether the captain has two, three, four or 12 picks at his disposal, the event week is what inevitably will carry most – if not all – of the weight.

Moving forward, players are well aware of the position they need to reach in order to qualify for Gleneagles, and three selections will still allow Watson to put his personal stamp on the squad, with plenty of room still available to add the late-charging “hot hand.” Regardless of how the next 18 months play out, the U.S. will take a talented group of players to Scotland. What they do once they get there will be far more important than the process by which they earned their ticket.