Putting is key to Woods' resurgence 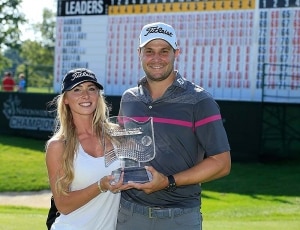 The ability to make long putts (and short ones, for that matter) is one of the strangest and most mysterious forces in all of sports. It takes obvious talents and skills, of course – touch and feel and balance and nerve and an ability to see paths through the grass. But it takes something on top of that, something harder to describe.

It was that unbeatable combination that once led Colin Montgomerie, when asked if he might win the U.S. Open, to ask only half-jokingly: “Is Woods injured?”

But, even with all that, it was Woods’ putting ability – specifically his ability to make longer putts – that took him to this unprecedented place in golf history.  Jack Nicklaus, it was always said, wasn’t a great putter until he had to be a great putter. Then, he was the best. Woods was a great putter always, and an even greater putter when he had to be. In 2001, he wrote about the feeling in his instructional book, “How I Play Golf”: “Under pressure, it seemed like I never missed.”

It really was like that. Woods has annoyed some people with his visible frustration every time a long putt does not go in – but, hey, Tiger Woods expects every one of them to drop in the hole, especially when he’s feeling good. He takes it as a personal affront when the ball disobeys. (Johnny Miller summed this up Monday when he said during the final round of theArnold Palmer Invitational that Tiger “hates making bogeys more than anyone who has ever played the game.”)

And, when a tournament is on the line, he expects even more. If you listed the 50 greatest clutch putts of all time, you would almost certainly have to put four or five or six of Woods’ putts in there, maybe more. You’d have to include: the putt he made to force a playoff at the 2008 U.S. Open at Torrey Pines; the birdie putt he made at the 18th to force a playoff at the 2000 PGA Championship; his 35-footer on the penultimate hole to win the 1996 U.S. Amateur; his 60-foot birdie putt that led to victory at the 2001 Players Championship – the one Gary Koch immortalized with his “better than most” call. This doesn’t even include his chip-in at Augusta.

But something happened to Woods the last three or four years.  It’s something anyone can see. It’s also in the numbers. The PGA Tour has a cool stat called “Putting Strokes Gained,” which basically breaks down every putt by distance. Take 8 feet – the average Tour player needs about 1.5 attempts to sink that putt (meaning that about half the golfers make the putt and half two-putt it). Well, if a PGA Tour golfer makes the 8-foot putt, he essentially gains a half-stroke on the field, and if he misses he loses a half-stroke to the field. That simple.

Why? Everybody always has opinions about what drives and stalls Tiger Woods. Some said he had lost his mental edge and confidence after going through the tabloid scandal. Some said that his swing was so messed up that he didn’t have time to work on his putting. Some said it was age. Some said it involved some injuries. Some said that every golfer, no matter how good, has only so many long putts in his quiver, and maybe Woods simply used his up. At different points, I believed each of these theories.

But if there’s one thing we know about Tiger Woods it is that we don’t know very much about Tiger Woods. He wants it that way. So nobody really knows – maybe not even Tiger Woods himself. At times he putted well. At other times, he flailed. The only question that really mattered was this: Could he ever putt like his old self again?

Well, this year, there is something different about him … and something familiar. He’s making the long putts again. He’s burning the cup on just about every birdie and eagle chance. He’s dropping those testy par putts. He’s locked in. Again, there are theories why. He’s happier. He’s most comfortable with himself. He’s working more on his short game. He’s dating Lindsey Vonn. Again: Who knows?

In winning Arnold Palmer’s tournament at Bay Hill again – eighth time he’s won, absurd; only Sam Snead at Greensboro so dominated a single tournament – Woods had two extraordinary putts that tell the story: one he made, one he didn’t.

The one he missed came on the first hole Sunday, before the rains rushed in. He was facing a 25-or-so-footer, and it was a lightning-fast putt. Other golfers were knocking that putt 9 or 10 feet past the hole because it was so ridiculously fast.

Woods, instead, calmly stepped up, hit the ball deliberately slowly, and watched as the ball trickled and trickled until it came to a stop about 10 inches short of the hole. How did he know to do that? Sure, he knows this course well – but so do other golfers. Sure, he’s a genius at reading the greens – but so are other golfers. If there’s one thing that you pick up watching golf week after week it is that these golfers are rarely fooled … but when there is something that fools one golfer, it usually fools everyone. That’s why you will hear announcers say, “Yeah, everybody’s leaving that putt short,” or “Everyone thinks that putt breaks left, but it actually moves a little to the right.” Woods broke out of the mold.

Which takes us to the 12th hole on Monday, and Woods’ coup de grace.  He was leading the field by three shots going into the hole, and then his playing partner Rickie Fowler drained a long putt to cut the margin to two shots. Woods stood over his birdie putt, a 25- to 30-footer that everyone thought broke to the left. The announcers made this point too. Nobody read the right break in that putt because, apparently, it was invisible.

Tiger Woods read the right break, drained the putt, and won the tournament. How did he see that? He’s Tiger Woods. He’s now the No. 1 player in the world again. He’s now five victories away from Snead’s all-time record of 82 PGA wins. He is now looking a whole lot like the Tiger Woods who dominated the golf world for a decade.

Will it last? That’s hard to say. Putting is a capricious act. Some weeks the putts drop. Some they don’t. Nobody made more long putts in the 1970s than the young Tom Watson. He made those putts by sheer force – he cracked his putts at the hole, utterly unafraid of the 5-footers coming back. And then, at some point, he stopped making the 5-footers coming back. And then he stopped hitting his first putt with the same kind of power and confidence. It’s a nasty cycle.

Maybe Woods went through his own nasty cycle. And maybe he pulled himself out of it. That’s hard to say. But right now, the way he’s putting, he’s the best player in the world again. The Masters, which tends to go to the supreme putter, is only two weeks away. There’s no doubt who is the favorite.