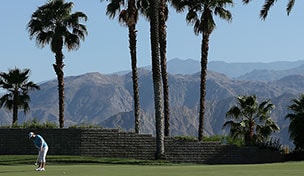 Getty Images
MANCHESTER, MA - JUNE 12: Rachel Jennings of Great Britain and Ireland reacts to a tee shot in Four Ball competition during the second day of the 2010 Curtis Cup Match at the Essex Country Club on June 12, 2010 in Manchester, Massachusetts. (Photo by Jim Rogash/Getty Images)  -

RANCHO MIRAGE, Calif. – Inbee Park’s putter is more like a paint brush than a tool.

There is more artistry than mechanical engineering in her stroke.

Park will be looking to use her Odyssey Sabertooth putter to paint her second masterpiece when she tees it up Sunday as the 54-hole leader at the Kraft Nabisco Championship. She is aiming to add a second major championship to the U.S. Women’s Open title she won at Interlachen in 2008.

With a 5-under-par 67 Saturday, Park took command of the year’s first major. She’s sitting at 12 under overall, three shots better than Lizette Salas (69). Nobody else is closer than six shots.

“This one would mean a lot,” Park said. “It’s just been a tournament I always wanted to win, with the special ceremony jumping into the water. Everybody wants to do that. It just feels special.”

Park, 24, looks like she will be tough to beat with her ball-striking and her putting stroke so fine-tuned. She was one of just two players to post bogey-free rounds Saturday on the toughening Mission Hills Dinah Shore Course. Paula Creamer (69) was the other. Park has made just two bogeys all week.

Still, this is the Kraft Nabisco, where nothing seems certain when long shadows fall over the course at tournament’s end. We saw that last year, when I.K. Kim missed a 14-inch putt at the 72nd hole that could have won her first major. We saw it in 2009, when Brittany Lincicome carved a hybrid from 210 yards to 4 feet and made the eagle putt to beat Cristie Kerr by a shot. We saw it in 2007, when Suzann Pettersen lost a three-shot lead with four holes to go and lost to Morgan Pressel. And we saw it in ’06, when Karrie Webb came from seven shots back to beat Lorena Ochoa in a playoff. That’s the year Webb holed a pitching wedge from 116 yards at the 72nd hole.

Park has won four LPGA titles, three of them in her last 15 starts, dating back to last summer. She won the LPGA money title last year and the Vare Trophy for low scoring average.

Salas, 23, has never won an LPGA title. She has never even played in the final Sunday pairing on tour, but she hung tough with Park in their pairing Saturday. She earned another chance to play alongside Park.

The daughter of Mexican immigrants, Salas grew up learning to play at Azusa Greens Golf Course in West Covina, Calif. Her father, Ramon, was the head mechanic on the grounds crew there. He struck a deal with the head pro to do odd jobs in exchange for lessons for Lizette. She developed a game good enough to earn a scholarship to USC, where she became the first member of her family to earn a college degree.

Growing up admiring Nancy Lopez and Lorena Ochoa, Salas has found yet another athletic inspiration this week. She played the Kraft pro-am with Oscar De La Hoya, the boxing champion.

“We were cracking jokes during the pro-am, and he was just saying how golf is like a boxing match, you have to keep fighting and be prepared for anything,” Salas said. “We have similar backgrounds, and he just told me to be proud of who I am.”

De La Hoya sent a tweet to Salas telling her to go for the knockout on Saturday and to put on a show on Sunday.

“We’ll see if I shift into gear tomorrow and throw in some fist pumps,” Salas said.

Park’s short game makes her tough to beat. She can roll putts in from everywhere. Park, who putts left-hand low, has ranked No. 1 on tour in putts per greens in regulation in three of the last five years.

Park taught herself to putt.

“I never had a putting coach,” Park said. “I had a swing coach, but putting has been my instinct and my feelings.”

It’s been her art, and she will be looking to paint another masterpiece Sunday at Mission Hills.