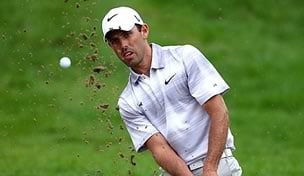 Getty Images
DUBLIN, OH - JUNE 05: Mike Weir of Canada watches his tee shot on the first hole during the second round of the Memorial Tournament at the Muirfield Village Golf Club on June 5, 2009 in Dublin, Ohio. (Photo by Scott Halleran/Getty Images)  -

JOHANNESBURG – Trevor Fisher Jr. shot a 9-under 62 and Richard Sterne had a 65 Friday to share the lead after the second round of the Joburg Open.

Fisher had an eagle and seven birdies, including a run of three straight in his back nine on the West Course at Royal Johannesburg and Kensington Golf Club. Sterne went bogey-free for the second consecutive round on the East Course.

The South Africans were 15 under at the European Tour event.

Defending champion Branden Grace, No. 10 on the European money list, missed the cut after rounds of 72 and 70 for a 1-under total.