McIlroy congratulates Woods on being No. 1 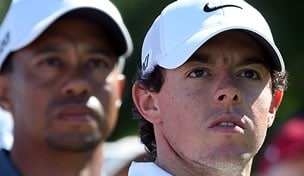 HUMBLE, Texas – Rory McIlroy may not have been able to watch much of Tiger Woods’ winning performance at the Arnold Palmer Invitational that propelled Woods back into the No. 1 ranking in the world, but he certainly took note of it.

“He’s obviously won three times this year and back to the top of the world rankings,” McIlroy said Tuesday in advance of this week’s Shell Houston Open. “He just seems like he’s in a really good place on the course, off the course. So it’s good to see.”

Woods and McIlroy have forged an unlikely relationship in the past year. Now stablemates with Nike Golf, they often play practice rounds together and keep in touch during off weeks.

The 23-year-old has often contended that he wants to compete against Woods with both playing their best golf. He understands that right now, at least one of them is fulfilling that premise.

“He’s playing great and any tournament I’m playing in, I’ll have to play my best to sort of beat him,” he said. “But it’s not just about him and me. There’s 154 other guys in the field that have a chance to win.”

With a victory this week, McIlroy can reclaim the No. 1 ranking from Woods, who now holds it for the 624th week of his career. The two will next compete in the same tournament two weeks from now at the Masters.