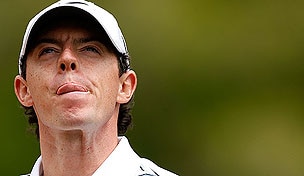 HUMBLE, Texas – What has already been a tumultuous season for Rory McIlroy despite limited action was on the verge of becoming even more curious early in his opening round of the Shell Houston Open.

McIlroy, who slipped to the world’s No. 2-ranked player earlier in the week, made bogey from the middle of the second fairway, then found the water with his second shot into the par-5 eighth to make double-bogey, resulting in a front-nine 3-over 39.

On this day, though, there would be no spinning out of control and no toothaches.

McIlroy birdied four of the next six holes and despite two back-nine bogeys, finished with a respectable 1-over 73 for the day.

“I hit the ball better on the back nine, made a few birdies there,” he said. “Just got off to a pretty slow start, couple of sluggish shots on the front nine which cost me, but it was nice to get a couple of shots back and hopefully get some good conditions in the morning and make some birdies.”

For the day, McIlroy found eight of 14 fairways and 11 of 18 greens in regulation while needing 29 total putts.

“I feel like I hit the ball OK,” he added. “I think if I just eliminate the stupid mistakes – I made double on a par 5 on the front nine and made a couple of silly bogeys – if I can just not do that and keep playing the way I'm playing, I feel like I'm playing OK.”

In only his ninth competitive round of the year, McIlroy maintains that he’s still getting a feel for things between the ropes.

“I've been hitting the ball great in practice,” he explained. “Obviously practice and going out here and in competitive rounds is a little bit different. I think I just need rounds just to get a bit more comfortable with what I'm doing, but it's feeling pretty good.”