Round 3 play finally under way at Torrey 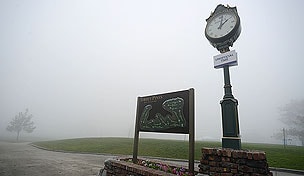 SAN DIEGO - The clouds, as they say, have parted.

After heavy fog wiped out nearly all of the third-round play Saturday, players were finally able to get back on the South Course at Torrey Pines at 7 a.m. PT Sunday morning.

With 87 players already scheduled to play in threesomes off both the first and 10th tees, yesterday's delays caused tournament officials to eliminate a secondary, 54-hole cut designed to further pare the field. The decision was also made not to re-pair groups after the third round, meaning players will play the remaining 36 holes in the groups to which they're currently assigned.

That means some additional time with tournament leader Tiger Woods for both Billy Horschel and Casey Wittenberg. With play resuming as scheduled this morning, the final pairing is now slated to tee off at 9:10 a.m. PT.

With play unlikely to continue much past 5:30 p.m. PT, PGA Tour officials expressed a hope Saturday evening that the leaders would have no more than 9-12 holes left in their fourth round to complete on Monday. This marks the second weekday finish for the Tour in just four events so far in 2013, after the Hyundai Tournament of Champions was forced to conclude on Tuesday due to high winds.