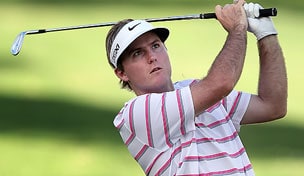 Russell Henley appears to be wasting no time in putting his PGA Tour card to good use.

Making his first start as a fully-fledged Tour member this week, the University of Georgia standout fired a 7-under 63 for the second consecutive day Friday, taking a two-shot lead into the weekend at the Sony Open in Hawaii.

A graduate of the Web.com Tour where he won twice in 2012, Henley birdied his first hole of the day and did not look back, carding seven in total on the day against no bogeys. At 14-under 126, he leads by two shots over both Scott Piercy and first-round leader Scott Langley.

'It's pretty surreal,' explained Henley, who tied Langley for low amateur at the 2010 U.S. Open at Pebble Beach.

After an 8-under 62 Thursday, Langley started his second round slowly before closing with three straight birdies for a 4-under 66 to place him two shots behind fellow rookie Henley. Continuing the strong form with which he ended the 2012 season, Piercy carded his second consecutive round of 6-under 64 and has yet to drop a shot through 36 holes in Honolulu.

'It's never easy to back up a really good round, I kind of got off to a little slower start,' the 23-year-old Langley told reporters. 'But it was certainly nice to finish the way I did and kind of get back in it with Russ.'

Closing his round with an eagle on the 18th hole, Matt Kuchar carded a 7-under 63 and sits alone in fourth place at 11-under 129, three shots behind the leader. Kuchar's round began unremarkably with seven straight pars, but the defending Players champion recorded five birdies and an eagle across his final 11 holes of the day.

Behind eagles on both of the par-5 holes at Waialae, Chris Kirk fired an 8-under 62, the lowest score recorded during Friday's second round. The effort moved Kirk into a tie for fifth at 10 under with Tim Clark and Charles Howell III, four shots off the pace.

Three days after claiming the season's opening event at the Hyundai Tournament of Champions, Dustin Johnson withdrew in the middle of his second round, citing the flu. After opening with a 1-under round of 69 Thursday, Johnson was 3 over after nine holes Friday and in danger of missing the 36-hole cut, which fell at 2-under 138. Among the other notable names whose week ended earlier than expected are 2008 Sony Open champion K.J. Choi, reigning PGA Tour Rookie of the Year Jonas Blixt and 2012 U.S. Ryder Cup captain Davis Love III.