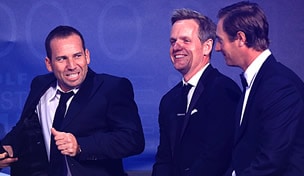 This time, however, he may have gone too far.

Garcia was on stage with the rest of the victorious 2012 European Ryder Cup team when he was asked by Golf Channel's Steve Sands, who was emceeing the event, whether he would invite Woods over for dinner at the U.S. Open next month.

The Spaniard replied, according to The Guardian: “We will have him round every night. We will serve fried chicken.”

Garcia soon apologized for the off-color comment, saying in a statement: “I apologize for any offense that may have been caused by my comment on stage during the European Tour Players’ Awards dinner. I answered a question that was clearly made towards me as a joke with a silly remark, but in no way was the comment meant in a racist manner.”

The back and forth between Garcia and Woods has extended beyond The Players Championship, when they were paired together in the third round. On the second hole, Garcia blamed Woods for distracting him while he was over a shot, and the two have seemingly traded barbs in the media ever since.

This comment, however, is sure to generate more attention because of the racial undertones. It was reminiscent of the remark made by Fuzzy Zoeller at the 1997 Masters, when he urged Woods not to serve fried chicken or collard greens at the following year's Champions Dinner.