The Social: Oh, just some major champs hanging with presidents 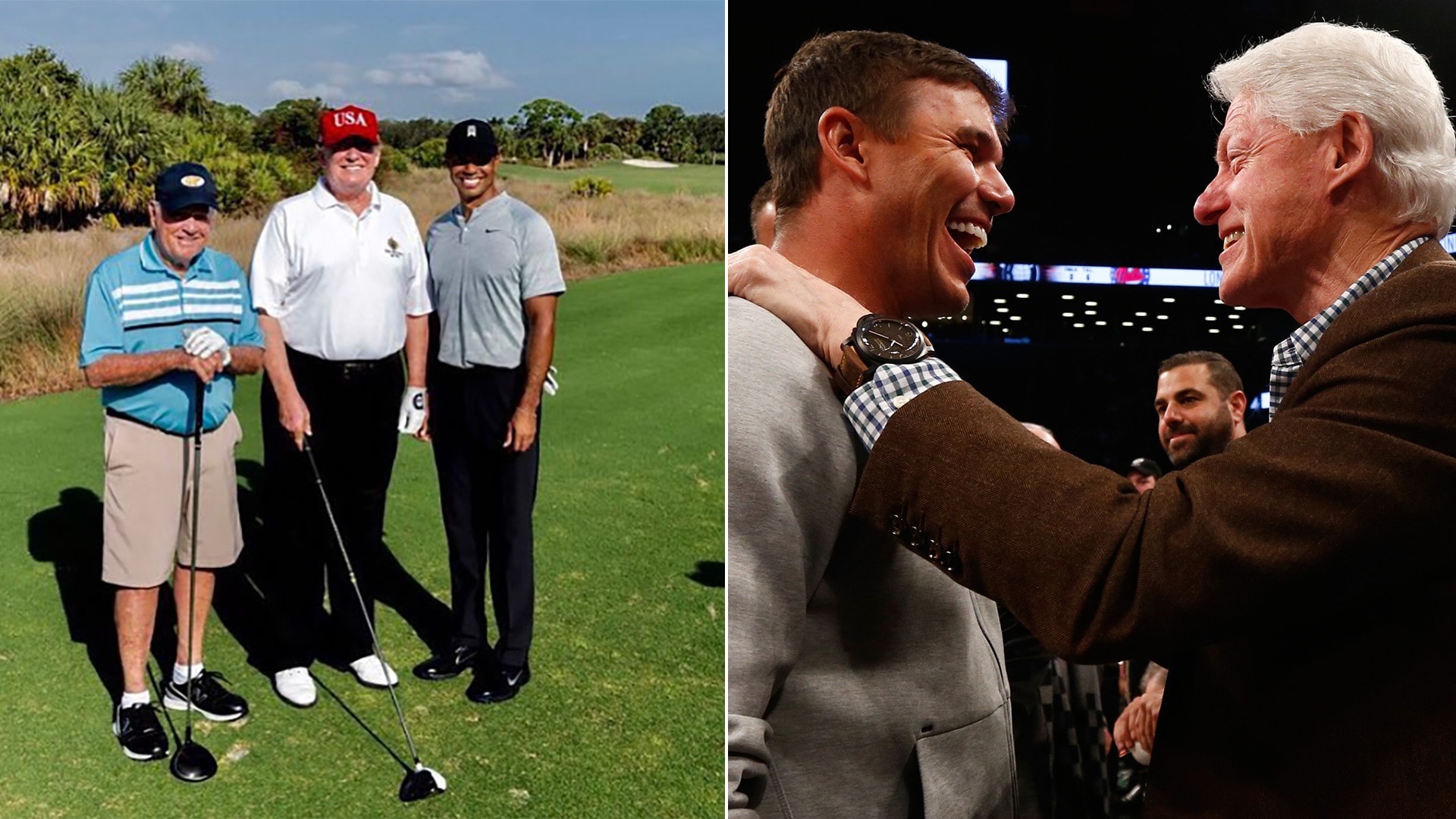 President Donald Trump hits the links with a couple of familiar faces, Rickie Fowler comes out of the Waste Management Phoenix Open madness with a victory and Brooks Koepka finds a way to look like a normal-sized human being.

Trump followed it up with a tweet (of course he did) about their round, reporting that Woods shot a 64 and predicting he wasn’t done winning majors. He also added, completely unprompted, that Tiger and Jack "like each other," so there’s that.

Everyone is asking how Tiger played yesterday. The answer is Great! He was long, straight & putted fantastically well. He shot a 64. Tiger is back & will be winning Majors again! Not surprisingly, Jack also played really well. His putting is amazing! Jack & Tiger like each other.

Trump didn't divulge what he shot, but you better believe the 18-time "Club Champion" held his own with the two guys who have only combined for 32 major championships.

SING FOR THE MOMENT

Rickie Fowler hung on for his fifth PGA Tour victory after a tumultuous final round at the Waste Management Phoenix Open that featured one of the weirdest triple bogeys you'll ever see.

It was nice to see Fowler recover from that unlucky break and get back in the winner's circle at this event specifically, because he had come so close in the past – losing in a playoff in 2017 and blowing a 54-hole lead last year.

And you didn't have to look any further than Rickie's Instagram page to see the weight figuratively lifted off the new world No. 8's shoulders.

Fowler celebrated his victory with a rousing rendition of "We Are the Champions" for his followers.

It's not quite a combination of Fergie and Jesus, but the sound of Rickie Fowler victories is something golf fans everywhere could get used to.

Another week of debauchery has come and gone at the Phoenix Open, and we'd be remiss to not take a look at the annual race to TPC Scottsdale's infamous 16th hole ... and a quick peek at the aftermath.

The "Breakfast Club" party starts outside the front gates of the course at 4 a.m. on Saturday, and they open the doors three hours later.

From there, the race to the stadium at 16 is on, where patrons find their seats and get ready to watch some golf ... around 10:15 a.m. when the first group comes through.

Want to be in the front of the line for the 16th hole? You better be ready to wake up early. Oh, and run 🏃#WMPO #GreenestShow @WasteManagement pic.twitter.com/6871Fh5wig

You’ll do anything to be part of golf’s loudest hole.

That, my friends, is a lot of time to down some liquid courage.

Book Robert Kraft for next year's Super Bowl halftime show right now. You know he'll just happen to be at the game anyway.

Johnny Miller bid an emotional farewell to golf fans on Saturday at the Waste Management Phoenix Open, hanging up the headset after 29 years in the booth.

GolfChannel.com's behind-the-scenes look at the Hall-of-Famer's sendoff is worth the read, as you can only see so much on TV, but it was one of Miller's um, to put it nicely, interesting eating habits that had social media buzzing.

Apparently, Miller likes his Easy Cheese ... alot ... directly from the can.

We're not here to judge, although, unsurprisingly, Twitter overwhelmingly disapproved of this move by the two-time major champ. But hey, at least he's got Charlie Kelly on his side.

For a guy who looks like he never leaves the gym, Brooks Koepka really gets around.

Fresh off a T-57 finish at the Saudi International – which he prepared for by vacationing in the Maldives – Koepka popped up at a Brooklyn Nets game on Monday with the Wanamaker Trophy, which he won at last year’s PGA Championship.

The three-time major champ was in town as part of a promotion for this year’s event which will take place in May just down the road from the Barclays Center at Bethpage Black.

Koepka brought the trophy on the court, was presented with a personalized jersey and even got a courtside seat right next to Bill Clinton, but the photo that caught everyone’s attention was this one of the 28-year-old looking comically small standing next to Milwaukee Bucks All-Star Giannis Antetokounmpo:

Los Angeles Rams player Andrew Whitworth after losing the Super Bowl with the argument to end all arguments.

#Rams OT Andrew Whitworth: "I don't give a crap if you have a HOF bust, if you’re a Pro Bowler or win 20 Super Bowls. At the end of the day we're all gonna die" pic.twitter.com/B623HQqWeI