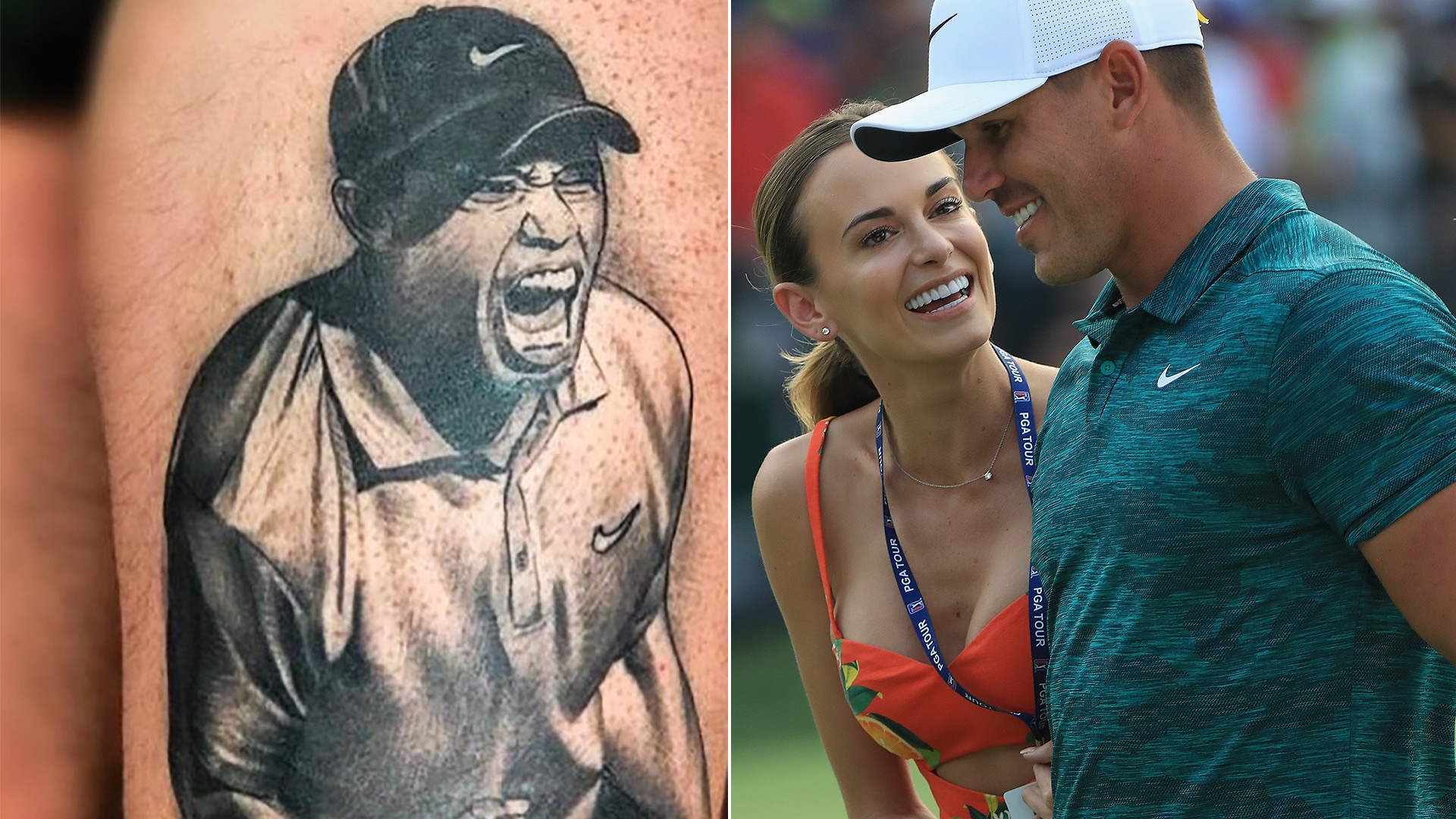 The Tiger Woods tributes continue to make headlines in the wake of his first major title in 11 years; Brooks Koepka keeps making himself happy; and a look at "tennis golf," the mashup sport you never knew existed, even if it isn't really necessary.

More than a week has passed since Tiger Woods won the Masters – another PGA Tour event has come and gone, the Easter Bunny brought eggs full of candy to eager kids (among other things) and Kanye West closed out Coachella by selling socks for $50 – but it appears Tiger-mania is still in full effect.

In fact, for some it will last forever, quite literally.

The aftermath of his fifth green jacket win – and first since 2005 – has brought with it recognition far and wide. It started cute, with lighting up the Empire State Building in Masters green, remembering his win through an animated flip book and artistically crafting Tiger's face onto a cup of coffee.

But much more borderline-questionable tributes popped up as the week went on.

One guy got a Tiger tattoo while a couple is naming their unborn child after the 15-time major winner.

My two favorite sports are mini golf and emotional dad hugging, so this lines up with my interests. Congrats to Tiger Woods on his 2019 Masters win. ⛳️⛳️⛳️⛳️⛳️⛳️⛳️⛳️⛳️⛳️⛳️ Special shoutout to The Tiger Woods Foundation...started in 1996 by Tiger Woods and his dad Earl Woods. They do a lot of good, but it’s core mission is to ignite a passion for school, college plans and STEM careers for underserved and minority students...really significant important work! (They were also one of my first flipbook commissions a few years back so that was significant too 😜)

A post shared by The Flippist Custom Cartoons (@theflippistflipbooks) on Apr 20, 2019 at 9:42am PDT

Green, with a dash of red. Can you dig it? pic.twitter.com/gg6Apjz5OV

Look, there is no wrong way to commemorate Woods' incredible comeback, and this is most definitely one of those to-each-their-own situations. But objectively speaking, a cup of coffee seems a little less permanent than say, a child's given name.

Countless others – besides those getting Tiger’s likeness tattooed on their body or naming their children after him – were ecstatic about his win at Augusta National, perhaps none more than the gamblers who bet on him.

Sportsbooks and fantasy sports websites reportedly got torched when Woods slipped on that green jacket, with one man cashing out for more than $1 million.

The lucky winner put down $85,000 at 14-1 odds on Woods to win the Masters at a William Hill U.S. sportsbook at SLS Casino in Las Vegas, and and collected $1.19 million in winnings, the largest single golf ticket in the company's history in the U.S.

The craziest part – it was reportedly the man's first ever sports bet.

Now that it has been cashed. Here are the two tickets...$85,000 on Tiger to win the Masters. Won $1.19 million. pic.twitter.com/LBFIyyhXES

Beginner’s luck: After a premonition, U.S. man James Adducci placed his first ever sports bet on Tiger Woods to win the Masters at 14-1 odds. The huge $118,000 bet paid off with Adducci taking home winnings of $1.67 million. #TheLatest #7NEWS pic.twitter.com/y7TBjRezY0

For context, the only player in the Masters field to earn more than $1.19 million was ... wait for it ... Tiger Woods.

William Hill U.S. put out a press release after Woods' win, saying that although it was their biggest loss ever, “It’s great to see Tiger back.”

The Easter Bunny came to town this past weekend, bringing eggs and cheer to kids all over, but he made an extended stop in Orlando, Florida, where he introduced one man to Jack Johnson and Tom O'Leary.

Turns out the Bunny was coming to a woman's defense after seeing a scuffle break out between her and a man, but in a vacuum, the visual of the Easter Bunny throwing down on Easter Sunday will never not be funny.

Today’s young studs on the PGA Tour could pick up so much from the legends of the game.

Count Brooks Koepka among those willing and able to listen, taking a page out of Happy Gilmore’s book and heading to his “happy place” after a T-2 finish at the Masters.

Koepka vowed to keep doing what makes him happy regardless of outside criticism, and the latest look at his life on social media seems to confirm that he indeed looks pretty happy.

Koepka spent part of last week posing for half-naked pictures with his girlfriend, Jena Sims, on a beach ... and there’s really not much more to the story than that (other than he's getting better at it).

Is golf too easy for you? Are you hitting the ball too well? Shooting too many low scores?

Well here’s the answer to all of your problems – simply use your golf clubs to play a different sport.

That's what Josh Kelley did last week, introducing the world to "tennis golf" and simultaneously becoming the best ever at the sport in the same exact post.

The man behind the popular @holein1trickshots Instagram account used his driver to hit shots on the tennis court that would even give the great Charles Poole trouble ... indubitably.

And just for good measure, Kelley follow up his "tennis golf" post with a "baseball golf" mashup that may be even more impressive:

Keep your eyes on both balls! Working on my short game and my dingers 🏌️⚾️ Tag a baseball player and a golfer! @joshkelleygolf #teamHiTS #SwingU

This begs the question – is all this necessary? No, but ...

Leave it to Phil Mickelson to have not only the comment of the week, but be part of the conversation of the week, on a week he wasn't even playing.

According to Phil's siblings, here's a sample of a recent chat he had with his 8-year-old nephew, which went exactly as you'd imagine it would:

Brother @PhilMickelson just tried using the word ‘Infrastructure’ to make a point to my 8yr old nephew. Pretty sure it went right over his head.