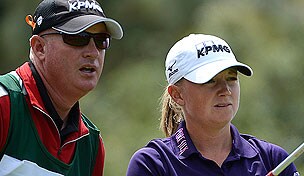 Getty Images
Denmark's Soren Hansen hits an approach shot during the fourth and final round of the of the 2005 French Open as part of the European PGA circuit at St. Quentin near Paris, June 26, 2005.Photo by Alexanderk/WireImage.com  -

RANCHO MIRAGE, Calif. – Rolex world No. 1 Stacy Lewis may have to play Friday with a backup caddie at the Kraft Nabisco Championship.

Travis Wilson, her regular caddie, was taken to an urgent care center with flu-like symptoms after Thursday’s round by Dale Lewis, Stacy’s father, according to Lewis’ management team. Wilson did not feel well before the round but toted the bag anyway in temperatures that reached 90 degrees. After the round, Wilson visited medical staff on site, who told him he needed an IV, but they were unable to administer one.

If Wilson cannot caddie Friday, Jeff Chilcoat, who teams with J.S. Kang at Sterling Sports Management as Lewis’ agents, is on call as a replacement.

Dale Lewis has described Wilson as more than a caddie to Stacy, calling him a “big brother.” As much as Stacy says Wilson dislikes the media spotlight, he has had an interesting couple months in the news. He was named the tour’s Caddie of the Year in Singapore in February. Three weeks ago, when Lewis won the RR Donnelley LPGA Founders Cup, Wilson was involved in a rules violation that thrust him in the news. Lewis was penalized two shots after Wilson was deemed to have tested the surface of a hazard in the third round. Lewis came back in the final round to win and told media she was motivated to win it for Wilson.