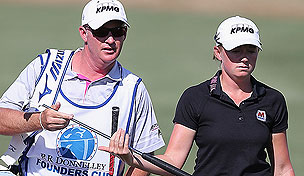 PHOENIX – Travis Wilson is uncomfortable in the spotlight.

That’s what Stacy Lewis told us Sunday, which means it was an awfully difficult week for her caddie.

With Lewis signing her scorecard after winning the RR Donnelley LPGA Founders Cup on Sunday, Wilson waved off two reporters wanting to talk to him. It took some serious coaxing to get Lewis’ caddie to relent.

After incurring a two-shot penalty for violating Rule 13-4 by testing the surface of a hazard during Saturday’s round, Wilson was the center of a buzz over the rules. The penalty translated into Lewis having to overcome a four-shot deficit instead of a two-shot deficit in Sunday’s final round. Wilson was uncomfortably at the center of a debate over why he even ventured into the bunker, and whether it was a subtle attempt to test the sand, or just an unfortunate mistake in the heat of the moment. He told Lewis he never intended to test the sand.

“I just really felt bad for him,” Lewis said. “The spotlight was on him, and he never wants that.”

Wilson said the fact that Lewis won was a great relief.

“It was a huge weight,” Wilson said. ““I do everything I can to help her get in the winner’s circle, and to have something weird like that happen yesterday . . . It’s the first time in 21 years that I’ve had anything like that happen. I was just devastated by it.”

Wilson was named the tour’s caddie of the year just two weeks ago at the HSBC Women’s Champions. He has been been Lewis’ caddie since her father, Dale, gave up the bag early in her professional career. Dale struck up a friendship with Wilson during the U.S. Women’s Open at Interlachen in ’08, when Dale caddied for Stacy as an amateur in the event. The friendship led to Wilson’s hiring.

“They are very close,” Dale said. “Sometimes, it’s almost like a brother-sister thing with them. He’s like the big brother.”

Lewis absolved Wilson Saturday, telling him repeatedly that he shouldn’t feel bad about the penalty, but she could see Wilson beating himself up that night.

“It happens,” Lewis said. “People hit a wrong ball or ground their club in a hazard. Weird things happen when you play enough golf, and I told him that over and over and over again. He would have felt horrible if we lost by two. That’s why I just put the dagger in and made some more putts coming in.”

Lewis said Wilson gave her a gift early in the week, a 1964 silver quarter. He told Lewis it was a sign. She was going to shoot 64 in a round this week. She used it as her ball marker, and she shot the 64 on Sunday.