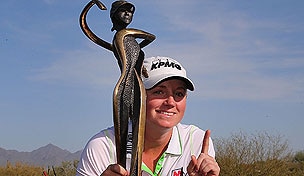 PHOENIX – Stacy Lewis proved she is all in on LPGA commissioner Mike Whan’s aim to make the RR Donnelley LPGA Founders Cup an event that honors the organization's past and invests in its future.

After winning the tournament Sunday, Lewis announced she was going to add a bonus to the $500,000 the event gives to the LPGA-USGA Girls’ Golf program.

A lot of coin changed hands at Wildfire Golf Club.

Lewis made the most of the lucky silver quarter her caddie Travis Wilson gave her at the start of the week.

It was a 1964 coin, and Wilson told her it was a sign. She was going to shoot 64 during the week. Lewis used the coin as a ball marker when she shot 64 in the final round to claim the $225,000 first-place prize and the Rolex world No. 1 ranking.

Afterward, Lewis turned a lot of “coin” over to LPGA-USGA Girls Golf with a $50,000 donation. Lewis also took time during the trophy presentation to recognize the LPGA founders and pioneers for their efforts creating the tour. Founders Louise Suggs, Shirley Spork and Marilynn Smith were honored guests on a stage aside the 18th green. Pioneers JoAnne Carner and Carol Mann were also there.

“To have our founders out this week, and our pioneers, they worked so much harder than I do right now to get this tour up and running,” Lewis said. “Everything is because of them. I feel like I need to keep giving back to the game and giving back to those kids because they're the future. They're going to be up here doing these interviews in 15 years. So I just feel lucky to be able to do it.”

Whan created the Founders Cup three years ago in a risky gamble, proposing that LPGA pros play for a $1.3 million mock purse while donating all of their tournament proceeds to charity. Basically, at a time of dwindling opportunities under a bare-bones schedule, Whan asked his players to invest in the future and play for free. The investment reaped a huge reward with the event blossoming into one of the tour's elite events. After that first year, RR Donnelley stepped up to fund a real $1.5 million purse for the players while also continuing to fund LPGA-USGA Girls Golf.