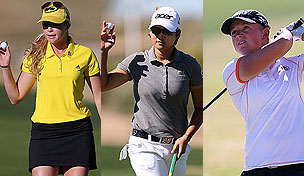 She closed out with a birdie at the last hole Thursday at the RR Donnelley LPGA Founders Cup with three of the tour’s living founders and two Hall of Fame pioneers applauding from what looked like little thrones on a stage behind the 18th green.

“Did you make that birdie just for us?” Hall of Famer Carol Mann asked Lewis.

“Yes, I saw you all sitting over here,” Lewis said.

Lewis is chasing greatness these days. After becoming the first American in 18 years to win LPGA Player of the Year honors last season, she is now setting her eyes on the Rolex world No. 1 ranking. While it was just the first round, Lewis’ closing birdie helped her post the low round in her power pairing with reigning No. 1 Yani Tseng and Paula Creamer.

There’s a lot of golf left to play here, but Lewis led the way in a marquee pairing loaded with delicious subplots.

Lewis can overtake Tseng as world No. 1 if she wins and Tseng finishes third or worse.

“I like how they put Yani and me together, knowing what was at stake this week,” Lewis said. “I knew they would do that.”

Lewis is going for back-to-back victories. She won the HSBC Women’s Champions in Singapore in the LPGA’s last event two weeks ago. Tseng is looking to defend the title she won here last year. She is also looking for her first victory in nearly a year. She won the Kia Classic 51 weeks ago, her last victory anywhere. Creamer is looking to get into the battle for No. 1 while shaking off lingering injuries from a car crash in Thailand three weeks ago.

As much motivation as there was percolating in this group, the atmosphere was more than congenial.

“It was pretty relaxed out there,” Creamer said.

There were conversations during walks up nearly every fairway.

“We chatted all day,” Lewis said. “I talked to Paula about some Solheim Cup stuff, and I hadn’t played with Yani since Japan last November.”

So Lewis and Tseng caught up with each other.

Though Lewis is bearing down on Tseng’s No. 1 ranking, there’s a lot of mutual respect between them.

Two years ago, Tseng asked Lewis to help her write her acceptance speech as LPGA player of the year.

Last year, Lewis thanked Tseng during her POY acceptance speech for showing her how to win and how to carry success.

That doesn’t mean they don’t want to whip each other every time they tee it up.

“When you are on the course, you try to beat each other,” Tseng said. “Outside the ropes, we are friends. If I don’t win, I’m happy to see Stacy win. If I’m not No. 1, I’d be happy for Stacy to be No. 1. If I lose, it’s my problem, not her problem. It would mean I just need to work harder to get better and stay on top.”

Creamer found plenty of motivation in the pairing.

Creamer’s climb is challenged by a sore neck and a sore right shoulder, the result of injuries suffered in a car accident on the way to the Bangkok airport in Thailand three weeks ago.

“Two discs are out of place,” Creamer said. “My shoulder is tight from when I hit the dashboard. It’s hard to have this injury and play golf but I’m not doing it any harm. It’s like a sprained ankle. You just keep going, and it will get better over time, hopefully.”

The power trio will be back together again Friday with an early tee time. They’ll be going off at 7:40 a.m. They’ll be back out there pushing each other to better things.