Stricker's schedule paying off, could be blueprint for others 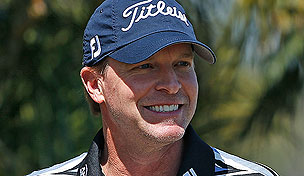 HUMBLE, Texas – Hey, did you hear the one about the old professional golfer? He didn’t retire – he just lost his drive! You know, speaking of retirement, it’s no pressure, no stress and no heartache – unless you play golf!

Without turning the local 19th hole into a Chuckle Hut with a two-drink minimum, the cross-referenced list of golf and retirement jokes is as long and painful as it usually takes to tell them. We get it. People get old, they stop working, they play more golf, hilarity ensues. (Hold the hilarity.)

When it comes to elite-level pros, the stark reality is that old golfers never retire. As Neil Young might shriek, they either burn out or fade away.

Jerry Barber is the oldest player to play in a PGA Tour-sanctioned event, competing in the 1994 Buick Invitational at the age of 77 years, 10 months and 9 days. You’ll never believe it, but he missed the cut. Arnold Palmer was 74 when he played for the last time. Gary Player was 73 – but that’s only if you believe the 1,000 sit-up-a-day marvel won’t plan a comeback anytime soon.

All of which leads us – as methodically as one of those tired jokes – to Steve Stricker.

At 46, Stricker would like everyone to know that he’s neither old nor retired, though the latter needs a little more explanation. The 12-time champion has elected to play what is artfully being called a “selective schedule,” which shouldn’t be confused with other elite players’ “selective schedules” because, well, it’s even more selective.

So far this season, he has played three events, with this week’s Shell Houston Open serving as his fourth. As of now, the plan is to compete in 11 total tournaments, though Stricker maintains his competitive juices could get the better of him later in the year.

“That can change, I guess, depending on how I play the next seven events or eight events,” he admitted. “If I'm up high on the FedEx Cup or if I have an opportunity to make the Presidents Cup team, I maybe play the playoff events, something like that. I still plan on playing my 11 and going from there.”

Whatever he’s doing is working. Stricker finished in sole possession of second place at the season-opening Hyundai Tournament of Champions, in a share of fifth at the WGC-Accenture Match Play Championship and added another solo second at the WGC-Cadillac Championship. He's already racked up $1.82 million in earnings, which based on last year’s money list would place him 44th at season’s end without pocketing another dime.

Of course, that’s highly unlikely. While most players need plenty of “reps” – as Tiger Woods famously calls them – in order to contend for titles, the less Stricker plays, the better he seems to fare.

“I always have come out and done fairly well when I'm fresh,” he said. “Whether that's a mental thing, I don't know. But I enjoy coming out. I feel like I'm a little bit easier on myself. I'm fresher mentally. I feel like there's a little more bounce in my step.”

All of which should lead to one very important question: If Stricker can play some of his best golf with a limited schedule, can this strategy serve as a blueprint for the likes of fellow 40-somethings Phil Mickelson, Ernie Els and Jim Furyk in coming years?

It’s a relevant query with so many big-name stars reaching the point in their careers where the week-in, week-out grind may not hold much allure. Playing less affords more family time at home while, unlike in previous generations, the need to earn money isn’t much of a dangling carrot. To wit: Stricker’s three-event total this season is just $41,857 behind Palmer’s career haul.

Of course, more professional golfers in their mid-40s are forced into a “selective schedule” than actually select it. Which is to say, you’d better find success if you want to enjoy the spoils.

Based on his eight victories in the previous four years, Stricker is fully exempt on the PGA Tour through the year 2017. If he so chooses, he could then use a one-time top-25 career earnings exemption followed by a top-50 exemption (he’s currently eighth on the all-time list), which would keep him as a full-time member through the age of 52. Failure to play the minimum of 15 tournaments only eliminates his voting privileges for such things as Player of the Year.

Meanwhile, he’s already easily qualified for each of the four major championships and WGC events – a schedule which could someday make him a trailblazer when it comes to how elite players view the back nine of their careers.

“I suppose you could play like that, if you’re exempt for those tournaments,” said 39-year-old Lee Westwood. “I could only talk for myself, but I’ve always felt that I need to play a bit. I find it difficult to take six weeks off and then come back in match fit and ready. But he’s done it his whole career, so why not? You have to do whatever suits you.”

For now, spending his off weeks in snowy Wisconsin while driving his kids to school has suited Stricker just fine – both on and off the course. He attended the Big 10 Conference men’s basketball tournament for the first time and plans on catching a few Final Four games in Atlanta before driving over to Augusta for the Masters. Meanwhile, his peers will be grinding away at the range and practice green, trying to find the form that never seems to leave him.

So, that old joke about retirement being no pressure, no stress and no heartache unless you play golf? It doesn’t apply to Steve Stricker.

Then again, neither does the term retirement.