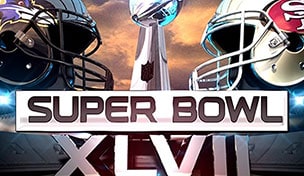 One of the most enjoyable parts of the Super Bowl is the prop bets. Not that we condone gambling; it is illegal as far as we know, (wink-wink, nudge-nudge.) But (pretending) to bet (imaginary) money on nonsensical things is about as American as the hot women in the beer commercials you're sure to see during the game. So without further ado, here are some actual things that you can bet on, (along with their odds) in Super Bowl XLVII.

Historical matchup – Who will have more tackles & assists in the game?

How many times will Harbaugh be said during the game?

How long will it take Alicia Keys to sing the national anthem?

From first note starts until she completes saying 'brave' for the first time.

Will Alicia Keys be booed during or after her rendition of the national anthem?

Will Beyonce be joined by Jay Z on stage during the Super Bowl halftime show?

Will any player on a Super Bowl XLVII active roster be arrested before the game?

What color will the Gatorade (or liquid) be that is dumped on the head coach of the winning Super Bowl team?

If Ray Lewis is interviewed on TV after the game how many times will he mention 'God/Lord'?

What will be the highest tweet per second during the Super Bowl?

Now before you rush to call your bookie because you have strong feelings about whether or not Lebron James will have a big game against the Raptors the same night as the Super Bowl, or if the fans in New Orleans might not like Alicia Keys' performance of the 'The Star-Spangled Banner,' the Grill Room Gang thought it would be fun to set odds on some prop bets for the year in golf. And while we don't run a bookmaking operation just yet, here are some things you can look forward to betting on if we get laid off and are in turn forced into the world of underground gambling.

How many times will Tiger Woods use the phrases 'part of the process' or 'stick to the game plan' in 2013?

How many MORE times will Phil Mickelson calls himself an 'idiot' this season?

Number of combined wins for Rory McIlroy and Caroline Wozniacki this year?

Who will be shown more times in the gallery this season: Lindsey Vonn or Paulina Gretzky?

Historical matchup – Who will attend and get on camera at more sporting events?

What is the next reason a PGA Tour round is canceled or postponed this season?

What happens first for Tony Romo?

Will Jason Dufner crack a smile at some point during the season?

Will John Daly run out of balls and not be able to finish a round in 2013?