TaylorMade CEO: Woods has no effect on golf economics 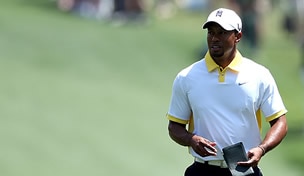 A notion exists among the golf industry that the play of Tiger Woods, especially when the 14-time major champion is playing well, tends to have a positive financial impact on various aspects of the game. With Woods in search of a fifth green jacket this week, one notable golf executive insisted that that's not necessarily the case.

'I don't think he's had any effect on the economics of golf,' Mark King, CEO of TaylorMade-Adidas Golf, said of Woods as part of a recent interview with CNBC.

During the interview, King was asked if Woods, who has won three times already this year on the PGA Tour, benefits the sport as a whole when he plays well. King was candid in explaining that while benefits may stretch to some ancillary portions of the industry, the trickle-down effect does not always reach the realm of equipment.

'Golf has been on a 16-year continual decline since Tiger came into golf,' he noted. 'Now, has he had an impact on people watching TV because he's maybe the greatest athlete of our generation? Absolutely.

'But are those people running out, taking golf vacations, buying a home on a golf course, buying a new driver? No, they're not,' continued King, who became president of TaylorMade Golf in 1999 and added the title of CEO in 2002. 'So Tiger, play well, get people watching TV, sell more spots, but it's not helping us.'