Is this thing over? Five things to watch on U.S. Open Sunday 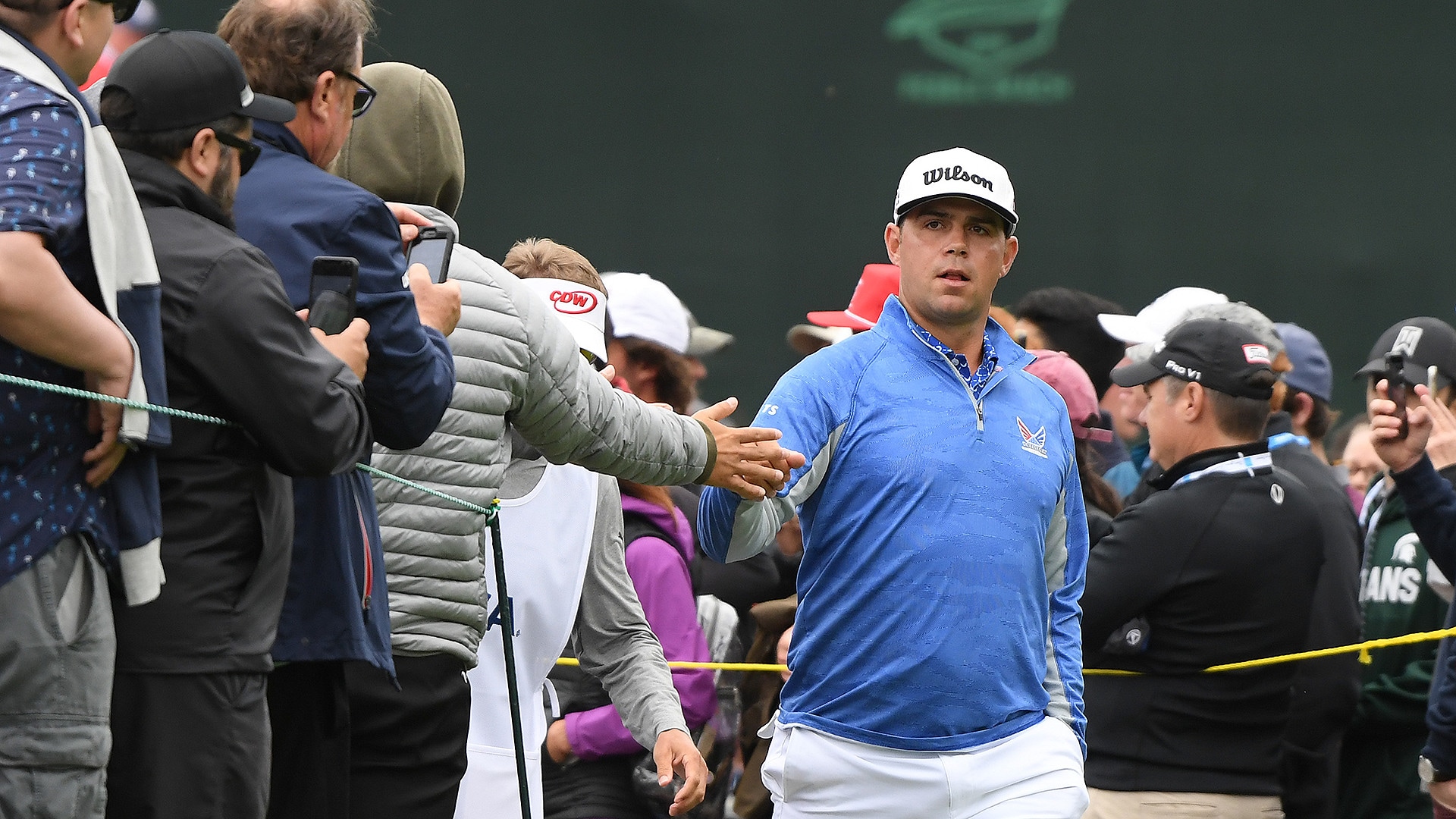 PEBBLE BEACH, Calif. – Gary Woodland started with the lead and wasn’t fazed by the pressure, but he couldn’t completely shake some proven major winners in Justin Rose, Brooks Koepka, Louis Oosthuizen and Rory McIlroy on Moving Day at the 119th U.S. Open.

With eight players within six shots of the lead through three rounds, Sunday at Pebble Beach could provide all sorts of fireworks in prime time on the East Coast. Here are five things to watch heading into the final round at one of the game’s most iconic venues:

1. Do the trends suggest this thing is already over?

Short answer, yes … to an extent. While predicting a winner might still prove to be a tall task, who will leave Pebble Beach the champion can certainly be narrowed down. The stats suggest a historic comeback probably isn’t in the cards Sunday.

Of the last 20 U.S. Open champions, 18 were inside the top five through 54 holes. So if the trend holds, Woodland, Rose (2nd, 1 back), Koepka (T-3, four back), Oosthuizen (T-3, four back) or Chez Reavie (T-3, four back) should theoretically be hoisting the hardware – with McIlroy (6th, 5 back) being a pretty dangerous odd man out just another shot back. 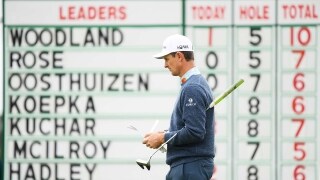 On the eve of the final round, we asked our writers at Pebble Beach who is going to win the year's third major.

With his third-round 69 in the books, Woodland is the fifth player to record a 54-hole total score of 202 or lower in the U.S. Open. Three of the previous four went on to win the event, so history tends to side with Woodland. Of course, things get a little tougher when you have a combined 10 major championships breathing down your neck. And speaking of breathing down his neck …

2. Can Woodland finish the job?

Woodland has certainly looked the part of U.S. Open champion through 54 holes, but this is a 72-hole tournament.

After grabbing a two-shot lead through two rounds, Woodland talked about leaning on his previous experience in similar situations, most notably, last year’s PGA Championship when he held the outright lead at the halfway point but faded on the weekend when paired with Tiger Woods.

On Saturday, Woodland played like a guy who had learned his lesson, and he sounded like it afterward, too.

“I know if I play my game and play like the way I've been playing, the guys from behind me are going to have to do something really, really special,” Woodland said. “So I'm going to go out, stay within myself, stick to my game plan and try to extend that lead more than anything. “

Those two shots, and possibly more like them in the final round could prove to be the difference come Sunday night.

3. Can Rose add to his major haul?

If there’s one major champion in the U.S. Open mix that has a leg up on the others, it has to be Rose, if only because he’s just a shot off the lead as opposed to four or five like his competitors.

Rose may be chasing, but it certainly doesn’t sound like he's approaching his final round with any sort of reservations. 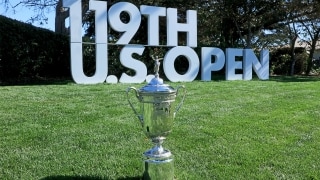 How a U.S. Open win could alter these careers

There are a handful of players who can win the U.S. Open on Sunday. For each one, such a scenario will forever alter their legacy.

“One back gives me the freedom to feel like I've got everything to gain, nothing to lose. It's always a position that – it doesn't mean I have to approach the day any differently, if I was one ahead. I'm close enough that I have to build my plan, build my round of golf, be disciplined,” Rose said. “I'm not chasing, really, I'm so close to Gary that I have to go out and play my game tomorrow. And I think it's going to be dictated by the pin placements and the weather tomorrow as to how aggressive you can be and what it will take to win. I make no predictions tonight on what tomorrow is going to feel like tomorrow.”

Rose has the experience card, and he’s not afraid to use it.

“I think at Merion I wasn't afraid to lose, and that's probably a good mindset going into tomorrow,” said Rose, of his 2013 U.S. Open win. “It gives you the freedom to play your best.”

Unfortunately for the rest of the field, Rose’s best is tough to beat.

4. If Koepka figures out his putter …

Koepka isn’t exactly Happy Gilmore come to life, but he’s the closest thing in this tournament. Sure he shot a 3-under 68 on Saturday and sits just four shots off the lead, but he left several shots out there because of his inability to make putts. The back-to-back defending U.S. Open champ ranks T-1 in greens hit in regulation but 62nd in strokes gained: putting. He made three birdies in his third round but missed a handful of other very-makeable birdie putts and an eagle attempt that lipped out on the par-5 sixth hole. 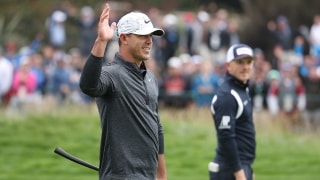 One glance at the U.S. Open leaderboard through three rounds and one name jumps out, both to fans and to everyone in contention.

Whether Brooks needs to switch to a hockey stick putter, go to his happy place or visit a mini-golf course tonight with his one-handed swing coach, if he does figure it out tomorrow the rest of the field better watch out.

5. Keep an eye on Tiger’s health

After a third-round 73 left him double digits off the lead, chances are you wont see Tiger Woods’ name anywhere near the top of the U.S. Open leaderboard on Sunday. But if you look closely, you may see the 15-time major winner sporting some more kinesiology tape on his neck as he did on Saturday.

Just two years removed from his latest major back surgery, Woods, 43, was rather pessimistic about the KT, explaining that it wasn’t precautionary but just “part of the deal,” especially when it’s cold out because “everything is achy.” 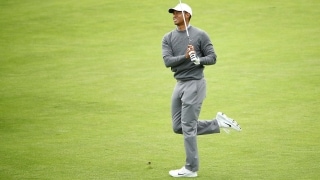 Woods on achy back: 'I feel every shot I hit'

Tiger Woods had a familiar accessory when he showed up for the third round of the U.S. Open: more kinesiology tape.

“It's been like that for years. The forces have to go somewhere. And if they're not in the lower back, they're in the neck, and if not, they're in the mid-back and if not they go to the knee. You name it,” said Woods, who most recently cited a neck injury when he withdrew from the Arnold Palmer Invitational in March. “Let me put it this way, I feel every shot I hit. I think that's always going to be the place from here going forward.”

Woods won’t get major No. 16 at Pebble Beach tomorrow, but it bears watching whether or not he can manage his back pain or if it will continue to get progressively worse.