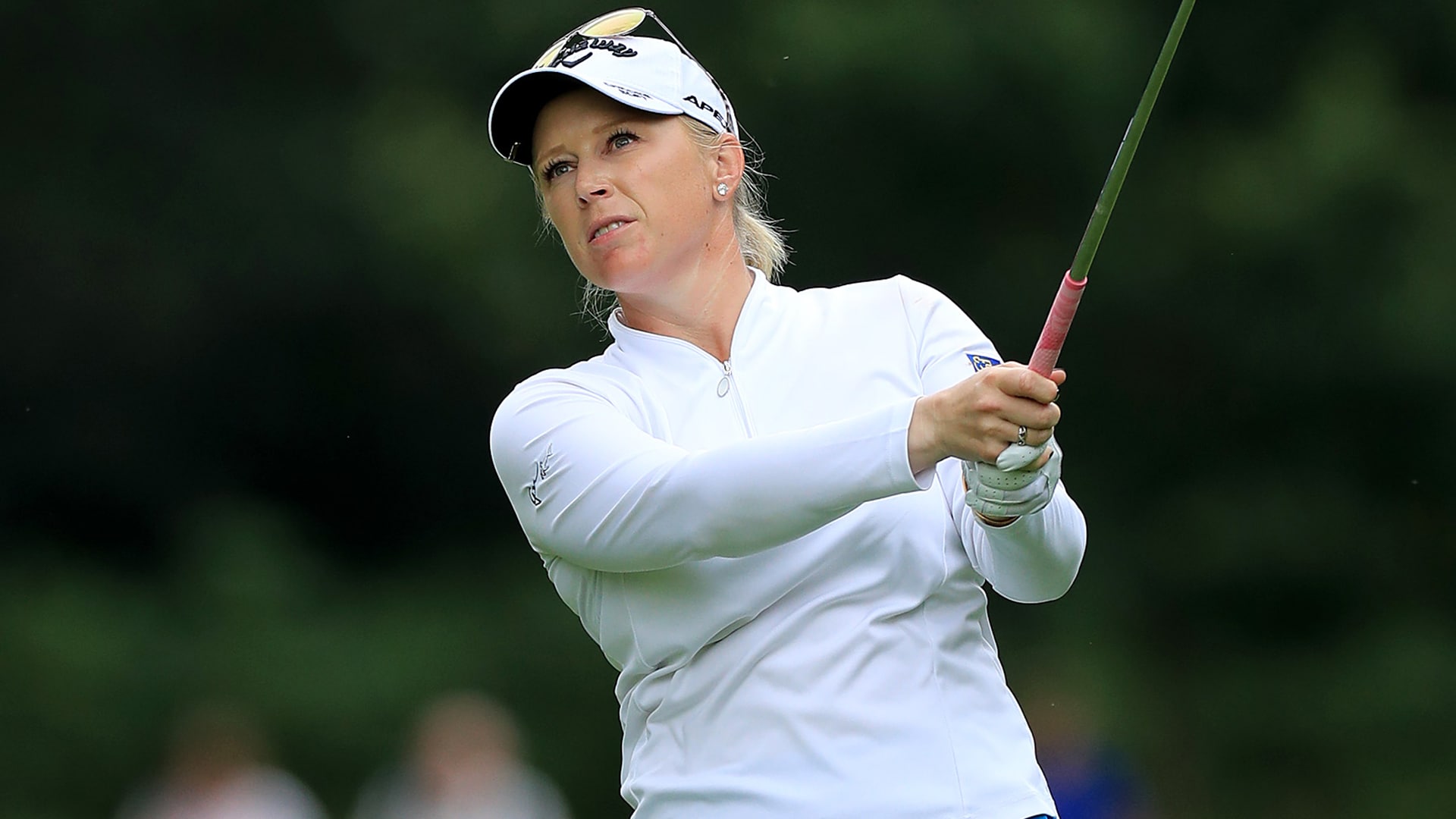 WOBURN, England – When Morgan Pressel showed up at Woburn Golf Club Saturday to get ready for the third round of the AIG Women’s British Open, she chuckled seeing her caddie.

Barry “Rock” Cesarz, a hulking presence who looks like he doubles as her bodyguard, was coincidentally clad in the exact same color ensemble she was wearing.

“Really?” Pressel said with her hands on her hips.

Yeah, everything appeared to be in sync in Pressel’s game as she made a hard climb to the top of the leaderboard.

With a 6-under 66, the former teen wunderkind rekindled major memories that her career was built upon. She is just four shots back of Hinako Shibuno, a Japanese prodigy making her own thrilling introduction to a global audience.

Shibuno is 20, playing in her first major championship.

Pressel? She qualified for her first major when she was 12, played in the U.S. Women’s Open at Pine Needles after turning 13, making her the youngest qualifier at the time to compete in the championship. She nearly won the U.S. Women’s Open as a 17-year-old amateur and later became the youngest woman at the time to win a major when she claimed the Kraft Nabisco at 18.

Pressel is 31 now, a veteran relishing the chance she’s giving herself again. It’s been a struggle the last few years, but she’s rebuilding the kind of game that helped her become a staple on major championship stages early in her career.

“I put myself in great position all day,” Pressel said.

There’s more than a major championship riding on Sunday’s finish for Pressel. She would love to be on the team U.S. Solheim Cup captain Juli Inkster will take to Scotland next month.

“Maybe giving Juli something to think about,” Pressel said.

Pressel is on Inkster’s radar as a possible captain’s pick if she doesn’t rally to make the team on points.

“It would be amazing,” Pressel said. “I've been fortunate enough to be on five teams. I missed it last time and that was difficult. I really am happy that I'm playing well, playing much better this year, even for myself, and, obviously, to have the opportunity to wear red, white and blue would be great.”

Pressel is making this run with the assistance of the coach who helped her burst on to the scene as a teen phenom. Ten years after she left Martin Hall to see if she could find more length with a new coach, she came back to him. They’ve been working together since, after her struggles at Kingsbarns at the Women’s British Open two years ago.

“I was quite upset, and just really struggling there,” Pressel said. “That’s when I called Martin to ask for help.”

“It’s been a great two years being back together,” Pressel said. “He has been tremendously helpful getting me in a better position with the club and playing better golf.

“He has given me 200 percent of his effort, and that really means a lot to me.”

Hall, who is based at Ibis Country Club in West Palm Beach, Fla., is English and still spends summers here. He was at Woburn on Friday helping Pressel.

“When a young player has success, it’s not unusual to change coaches when you get on tour,” Hall said. “I think the world of Morgan as a player and a person, so I was glad when she called to get back together.”

Pressel said she was struggling with her swing plane when she called Hall, getting stuck inside the line, and swinging too much inside to out. He has helped with that.

“As a coach, I think you see it getting better before the player does,” Hall said. “It’s hard work and it comes bit by bit, but she is very talented and she is playing a lot better now.”

Cesarz sees more than the swing coming around.

“It’s about confidence, too,” he said. “She’s driving it so well. It’s going right where she’s looking.”

Pressel is raving about her new Callaway Epic Flash driver.

“I was struggling for a couple years, and driver was definitely plaguing me,” she said. “It’s tough scoring from the trees, but I’m putting myself in position from the middle of fairways now.”

And in position on the leaderboard on a Sunday again.

“I gave myself a chance,” Pressel said.