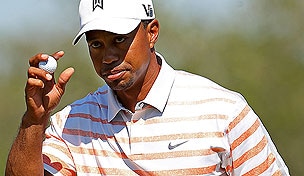 DORAL, Fla. – Raise your hand if you wish the Masters began next week?

This is a veritable golf smorgasbord. There’s something for everyone.

The Masters can’t get here soon enough with the game’s biggest names (save for Rory McIlroy) all in top form.

There are PGA Championship winners, several Masters champions and a U.S. Open victor all within striking distance. They’ve all turned the Blue Monster at Doral into the Cookie Monster the past two days, with birdies galore being made all over the lot.

But above all stands Tiger Woods, this generation’s ultimate champion. Woods already has a victory this year at his beloved Torrey Pines and the game’s greatest frontrunner now takes a two-shot lead into the weekend at another place he’s dominated.

Woods backed up a first-round 66 with a 65 Friday to record a 13-under-par total.

The 14-time major champion achieved another first this week – he recorded 17 birdies over the first 36 holes. (Woods' previous record was 16 birdies in the first two rounds of the 1999 Byron Nelson. He ultimately tied for seventh place.)

“That’s a good start,” Woods said in the understatement of the century. “I’m playing well and I made a bunch of putts. But more importantly I left myself in the right spots to make putts and I think that’s probably the biggest key. I kept leaving myself where I could be aggressive.”

After making nine birdies in the first round, Woods began his second round with three consecutive pars and admittedly didn’t hit too many stellar shots. A laser 4-iron from 238 yards on the par-3 fourth hole landed 4 feet from the hole and that swing was enough to propel Woods into a more positive mindset. In the next 12 holes Woods made seven birdies and a lone bogey.

“All I need is one shot and as soon as I felt it on one, I can pretty much carry that through,” Woods said.

“It’s funny, he sort of just plods along,” McIlroy said. “He’s putted well the last couple of days, which has been a big thing.

“He hit a lot of really quality iron shots and put the ball in the fairway for the most part and putted really nicely. He looked really solid.”

Most noticeable is that Woods has put no stress on himself. The lone bogey on Friday was the result of a poor drive on No. 14. His tee shot on the par-3 15th hole found the back bunker, leaving him with little green to work with because of a tucked hole. Woods blasted out to 15 feet and calmly made the putt to help momentum.

Graeme McDowell is Woods’ closest pursuer heading into the weekend. Phil Mickelson and Steve Stricker are a shot behind McDowell and others including Bubba Watson, Charl Schwartzel, Keegan Bradley and Dustin Johnson are all in the top 10.

Weekend conditions are supposed to be more difficult, with the potential of turning this cupcake of a course into more of the monster that it’s named. Sunday's forecast calls for more wind and players all say they expect the greens will be baked out.

Sure, we’re midway through this World Golf Championship event but it’s difficult not to view this as another Woods coronation. He held a four-shot lead after 36 holes at the Farmers Insurance Open and cruised to PGA Tour victory No. 75.

This one is sure to be more difficult to win than that one in San Diego, as the closest pursuers there don’t hold a candle to those here.

McDowell, for one, has stared down Woods recently as much as anyone. Woods was in contention at the 2010 U.S. Open that McDowell ultimately won and, although it’s a year-end cash grab, McDowell also beat Woods head-to-head in a playoff at Woods’ World Challenge later that same year.

“I’ve played with Tiger many times, many stages,” McDowell said. “I feel like I’ve learned a lot over the years playing with him.

“Tomorrow is not about winning the golf tournament. Tomorrow is just about maintaining position, maintaining the way I’m playing and trying to give myself a chance come Sunday afternoon.”

True. But a hungry Woods, seemingly firing on all cylinders a month before the Masters, has to be a scary sight.